Skip to main content
Wargame: Iraq—Shows How the Highest Levels of the U.S. Government Prepare for War

NBC News and the Council on Foreign Relations Collaborate
on an In-Depth Look Inside the National Security Council,
and How it Could Decide to go to War with Iraq

More From Our Experts
Thomas E. Donilon
Examining America’s Role in the World

New York, November 19, 2002—In a special event, MSNBC presents "Wargame: Iraq," an inside look at how the National Security Council might advise the President on a decision to attack Iraq. "Wargame: Iraq," airing Monday, November 25, 10:00p.m.-12:00a.m. ET, is a dramatic account of simulated meetings of the National Security Council, enacted by veterans of past administrations and experts in foreign policy, as they decide the terms for going to war. 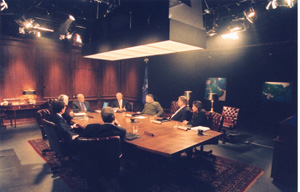 The purpose of the wargame is to educate the public on the considerations and complexities in making decisions on war and peace. To achieve that educational purpose in a two-hour program, events and discussions were necessarily condensed and speeded-up.

NBC News and experts from the nonpartisan Council on Foreign Relations collaborated to create a scenario based upon current circumstances. The scenario begins with United Nations weapons inspectors on the ground in Baghdad, 50,000 U.S. troops in the region, and a declaration by Saddam Hussein that he does not possess weapons of mass destruction. The United States has ambiguous information to the contrary. In two separate sessions, the mock Council must cope with a series of increasingly difficult fictional developments in Iraq and around the world, and at each turn decide: What are the President’s options? Is Iraq in material breach of its obligations to the United Nations? And should the President proceed with military action?

More From Our Experts
Thomas E. Donilon
Examining America’s Role in the World

"National Security Council meetings—many of which I attended during my government service— are messy, tough and intense, all of which you get to see in this wargame," says Council President Leslie H. Gelb.

The members of the mock National Security Council are renowned experts in foreign policy and government relations: 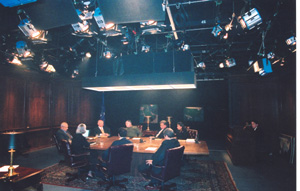