Bottom Line: Japanese Central Bank Governor Haruhiko Kuroda raised eyebrows in Davos with his call for the Chinese government to consider controls to stem capital flight. The idea is less radical than it seems; although comprehensive liberalization is theoretically the ideal option, capital controls may be China’s best chance to end the panic roiling global markets.

Capital continues to flee China, putting downward pressure on its currency, the renminbi (RMB), and creating turmoil in global markets. The government has intervened heavily in response, but has seen a significant worsening of its external accounts, despite a large and growing trade surplus. Although central bank reserves are still a hefty $3.33 trillion, this figure fell a record $108 billion in December and is now down more than $650 billion from its 2014 peak (see figure 1). Anecdotally, capital outflows accelerated in January, despite a range of informal measures aimed at deterring flight. The Institute of International Finance estimates capital outflows from China at over $670 billion in 2015. 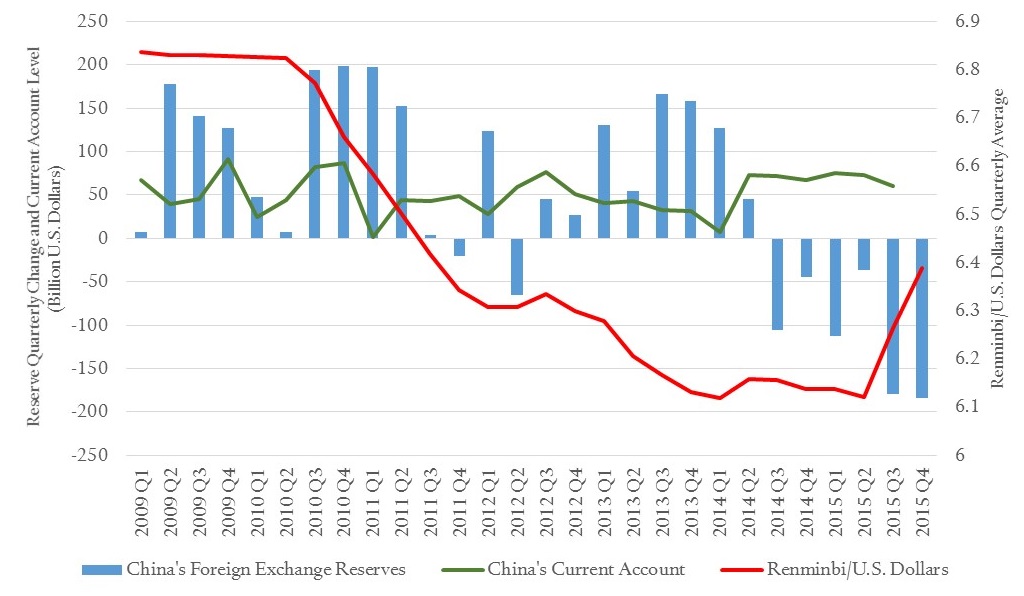 The Chinese government would have the world believe that the outflows primarily reflect a one-time unwinding of investments by Chinese firms that in recent years borrowed abroad cheaply in foreign currency and invested at higher rates domestically. This “carry trade” was thought to be on the order of $500 billion, and its unwinding resulted in the central bank providing funds mainly in dollars, allowing firms to repay the loans. If this was the only factor at play, the downward pressure on the currency and the reserve loss would be temporary. Further, the unwinding of these positions—whether viewed as dedollarization or debt repayment—would contribute to the healing of bank and corporate balance sheets and would help the government deal with the legacy of past bad debts and overcapacity in real estate and manufacturing. In late 2015, a slowing of the outflows and reasonably solid underlying economic data seemed consistent with this story. But the renewed turbulence at the start of the year suggest more fundamental and longer-acting forces are at play.

There are many reasons to believe that there is a continuing incentive for capital flight from China. The easing of monetary policy, which appears to be justified in order to stabilize growth at home, leaves domestic interest rates too low relative to international rates to offset the evident risks. This means that returns at home are insufficient compensation for risk. Slowing economic growth, an anticorruption drive, and expectations of further exchange-rate depreciation all add to the pressure. A stop-and-go policy response—poorly corordinated among Chinese government agencies and poorly communicated to the public—has undermined credibility. The rapid pace of reserve loss adds to concerns that policy is on an unsustainable path, adding to the incentive for investors to get out now while they can. In many respects, a self-fulfilling run is underway.

The above arguments suggest that the RMB may need to fall further to restore market equilibrium. This is not to say that the currency is overvalued in the conventional sense. China’s reported trade surplus is significant, and it is increasing as domestic demand softens. Further, the actual trade surplus is likely to be far higher. Substantial underinvoicing of exports and overinvoincing of imports are likely, as Chinese firms move money abroad under the guise of authorized trade. Trade through Hong Kong, particularly in services, is especially suspect. Some of the recent increase in outward investments also may reflect disguised capital flight.

A better way to look at the current capital outflows is as a classic exchange-rate overshooting phenomenon, as first articulated by Rudi Dornbusch in 1977. When domestic prices are sticky, a capital shock of the sort now underway in China requires a sharp increase in interest rates to stabilize the demand for domestic assets and thus the exchange rate. Absent that, the exchange rate has to depreciate beyond its long-run value to provide an adequate real return to investors while prices and activity adjust to the new environment. Over time, the adjustment of the economy will stimulate demand and the exchange rate will rebound. But until that happens, which could take six months to a year or more, the incentive to take capital out persists. Intervention in these cases can delay the depreciation of the currency, but it does not reduce the incentive to take money out and indeed can stimulate additional speculation against the currency. The central point here is that the incentive for flight persists until the exchange rate overshoots its equilibrium value. By doing do, the subsequent expectation of appreciation creates an incentive for investors to hold again.

Policymakers have a range of options for dealing with these pressures, but employing one above all others is a recipe for trouble—it is risky to intervene without making necessary changes to domestic macroeconomic policies. This is precisely the current situation in China. From this perspective, although the rapid loss of reserves has financed the repair of Chinese balance sheets, it does nothing to stem the incentive for capital flight to continue. Indeed, the perception that the government is willing to spend large sums of money in such a situation can exacerbate pressures for flight.

One option for the government is simply to allow the exchange rate to float and the overshoot to occur. Much of the economic literature, informed by Latin America’s tortured experience with unsustainable pegged exchange rates, sees a smooth and rapid adjustment as far better for the economy resisting the depreciation. More broadly, a careful program of structural reform, adequate demand support, and cautious market liberalization—including exchange markets—clearly is preferable to the continued loss of reserves.

The usual policy recommendation for a country that does not want a large depreciation of its currency is to adjust domestic policies to reduce the incentive for capital flight. In this case, that means a tightening of monetary conditions. Chinese monetary policy remains highly accommodative, as measured by credit growth and offshore risk premium. Financial institutions still face significant pressures to lend to favored sectors and the central bank has moved cautiously to crack down on shadow banking excesses. All of this makes sense for a government concerned about slowing growth, but it is the wrong strategy if the goal is to stabilize foreign exchange markets.

The government understandably has ruled out these options, at least to date. Largely, that reflects domestic political constraints on how quickly the reform process can proceed. From an international perspective, a rapid depreciation of the RMB would be met by copycat measures from many trading partners and protectionist pressures globally. It would adversely effect global risk sentiment, generate a race to the bottom as other countries followed the RMB down, and provide relatively limited benefit to a Chinese economy already in surplus and committed to a domestic rebalancing and working off of manufacturing sector imbalances and excess capacity. Further, a large Chinese depreciation would spur substantial protectionist pressures, particularly in the United States where populist, anti-Chinese sentiment would find fertile ground. For all these reasons, capital controls appear to be the lesser evil for the Chinese government.

A common criticism is that capital controls would be a step backward in the ongoing effort to encourage the international use of the RMB, including through its inclusion in the special drawing rights (SDR) basket of the International Monetary Fund (IMF), beginning in September 2016. Indeed the IMF has sent mixed signals on financial reform, at times urging a go-slow approach even as it made foreign-exchange-market reform a condition for accepting the RMB into the SDR. In the Fund’s defense, its SDR decision speaks to the RMB being freely useable for transactions between member countries, and does not require that the RMB be convertible on and offshore for the private sector. Further, the IMF has cautioned correctly against too much momentum toward liberalization before hard budget constraints and other preconditions for successful reform are in place. That said, the decision to include the RMB in the SDR was seen by many in China as an important step toward improved status in the international economic arena and as a catalyst for further liberalization, and controls would be a step back in that regard.

From this perspective, there is a compelling case for capital controls as a temporary, stabilizing measure to relieve exchange-market pressure and allow time for the authorities to address existing imbalances. To some extent, such an effort is already underway, as the government reportedly has moved to crack down on misreporting of trade and provided informal guidance to banks to limit transfers. More formal controls and montioring are likley to be needed to constrain complex multinational companies from shifting funds abroad. This is far from the ideal policy, but may well be the constrained best option for a government trying to regain credibility and stabilize its markets.

Looking Ahead: Kahn's take on the news on the horizon

The European Central Bank’s promise to ease policy in March has provided temporary market stability, but the expected measures may not produce a material demand boost. Still, the message from central bankers globally is that negative interest rates are working better than expected.

Nigeria is the latest oil-exporting country to seek international support; an IMF program may be unavoidable.

If negotiations stall between Greece and its European partners, “Grexit” is likely to return as a market concern.

Why Air Pollution Is So Bad in Asia's Cities

China's surplus is down relative to its pre-global crisis level, both in dollar terms and as a percent of China's own GDP.    The same cannot be said of China's neighbors.   East and Southeast Asia are still a substantial exporters of savings to the rest of the world.

Indonesia’s high-stakes vote for president is likely to result in more political stagnation for the world’s third-largest democracy.