Bottom Line: The International Monetary Fund (IMF) deserves credit for effectively responding to the global and European financial crises. However, the institution will face different and potentially more difficult challenges in the next five years as it struggles to come to terms with a changing international power order and lending rules that are not well suited to address future crises.1

Christine Lagarde assumed the helm of the IMF in July 2011 at a moment of turbulence for the Fund. Roiled by the resignation of Dominique Strauss-Kahn two months earlier, the IMF was under attack on a number of fronts. The Greek adjustment effort, designed by and strongly supported by the Fund, was on the brink of failure; the IMF decision to provide one-third of the financing for Europe’s rescue packages had come under harsh criticism from emerging market members as a special deal for Europe; and there was a growing perception that the Fund was out of touch with the views of rising powers such as China, India, and Brazil. Efforts to strengthen its policy advice outside of financial programs—“surveillance” in Fund-speak—had run out of steam as the global financial crisis began to recede and major industrial countries found policy coordination inconvenient. Significant questions were being raised regarding whether the Fund would be able to deal with threats then facing the global economy.

Difficult times demonstrate the importance of the IMF, and now, five years later, a brighter take on the Fund’s role is possible. A global recovery has taken hold and, although credit rests more with national authorities and central bankers, the IMF’s steady support for the European periphery no doubt helped stem the panic, shore up confidence, and provide essential resources to needed financing packages. The Fund has acknowledged that some of the early programs were poorly designed (for example, in underestimating the drag from fiscal consolidation), but it is unclear what could have been done differently absent additional (and more timely) finance from European creditors to allow a slower pace of adjustment. I am more sympathetic to the charge that Fund decisions to delay restructurings in Greece in 2010–2011 and Ukraine in 2014 led to deals that were “too little, too late,” resulting in new lending rules in January 2016. I have concerns with the new approach, as I note below, but on the whole it represents a sensible effort to reduce crisis risks.

The IMF was not the only institution that failed to anticipate the global risks now roiling markets: a crisis in China and its contagion to emerging markets already shaken by lower commodity prices, capital outflows, and weak global demand. But it will be graded on how it responds. Latin America should be a particular concern for the IMF. Three of the largest countries in the region—Argentina, Brazil, and Venezuela—face significant economic challenges in the year ahead, and a crisis in any of these three countries could have profound spillover effects. None of these countries is close to asking the IMF for its financial support. But if that were to happen, the odds that the IMF will be asked to intervene with sizeable resources on multiple fronts is higher now than in many years. Beyond the challenges in the year ahead, two interlinked problems stand out in particular.

China and the Rising Power Question

One of the central challenges for the Fund going forward is its shifting relationship with China and the other emerging powers. Following the move by the Group of Twenty (G20) to meet at the leaders’ level in 2008, and the successful effort to bolster Fund resources to deal with the crisis, the IMF faced a double-edged challenge. It had to create a role for these countries and incentivize their fuller participation in the leadership of the international financial institutions, while at the same time strengthening its policy dialogue with these economies. On both counts, the Fund has struggled. On the representation side, it was hamstrung by the failure, until recently, of the U.S. government to approve a package of reform measures agreed to in 2010, though it did address one Chinese ambition with its support for inclusion of the renminbi (RMB) in the Fund’s currency basket, the special drawing rights (SDR). Still, the creation of the Asian Infrastructure Investment Bank (AIIB), the New Development Bank (formerly BRICs Bank), and talk of enhanced regional swap lines raises questions about the coherence and consistency of the global crisis architecture that places the Fund at the center.

In a recent speech, Lagarde highlighted two roles for the Fund going forward: providing a better framework for capital flows and strengthening the global financial safety net. For the Fund, that means a role at the center of a strengthened set of swap lines between central banks in advanced and emerging economies. That may be a bridge too far for leading central banks and governments. But absent concerted action, the temptation exists to continue the regionalization of rescue efforts, including in Asia through an expansion of the Chiang Mai Initiative, a currency-swap network in the region.

The Fund’s failure to come to terms with China’s macroeconomic imbalances that persisted through the past few years was a larger concern. Certainly, a careful reading of the Fund’s annual reports on the Chinese economy can find warnings concerning the imbalances that have roiled markets since last summer. However, it does seem that deference to the Chinese authorities muted those warnings and the Fund’s voice was not an effective signal to markets or the public more generally. To the IMF’s credit, the reports urged a cautious response to financial deregulation, stressing the importance of careful sequencing and hard budget constraints on firms before markets were opened. That said, the public perception now seems to be that the Fund was a cheerleader for the market reforms that led to the current crisis, which cannot help but damage the IMF’s credibility on this issue.

Related to its relationship with the rising powers, the Fund needs to decide how it interacts with European economies, clarifying the proper relationship with Europe's currency union and regional relationships. “Grexit” could reemerge as a challenge for markets, if agreement is not reached on economic reforms and debt relief in coming months. Even if agreement is reached, the IMF will be expected to lend to Greece in a highly risky environment. More broadly, the right lessons need to be drawn about the best role for the IMF to play when countries, without an independent monetary policy and with significant pan-European constraints on fiscal policy, have a crisis meriting IMF support.

The Fund’s Role as Fire Department

There is a broader issue at play here. Looking back to at least the Mexico and Asian crisis packages of the 1990s, we have seen a Fund that is struggling to come to terms with increasingly large demands on its resources. This period has also witnessed rapid growth in financial markets and the expansion and greater integration of major emerging markets into the global financial system. This means that the financial requirements of a rescue package for one of these countries have grown much faster than the Fund’s resources. In other words, the world is getting bigger more quickly than the Fund’s resources have grown (see figure 1).

The IMF was never intended to be a lender of last resort, though at times it benefited from markets believing that it was. At the same time, despite its de facto senior status, it has grown increasingly concerned about the demands on its balance sheet from increasingly large financing programs. It is becoming clearer that Fund money alone is not going to be enough and that the timing and scale of debt restructurings will be a function of the adequacy of financing rather than whether debt is above an arbitrary threshold. 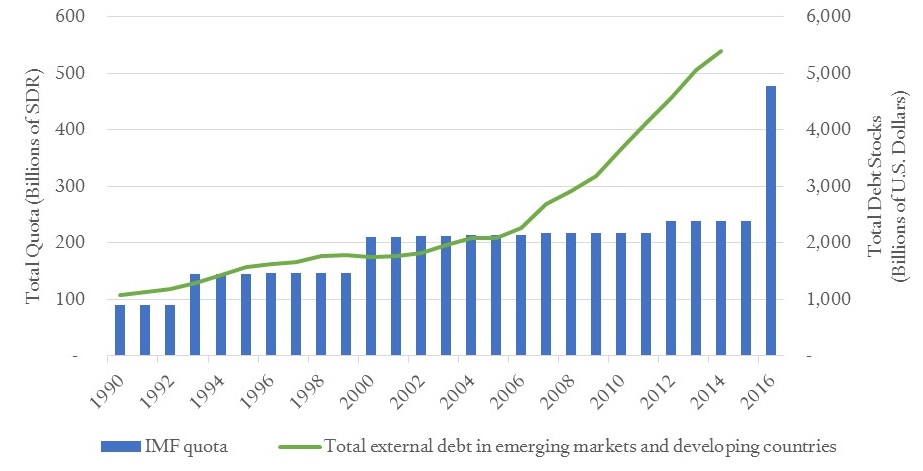 Last month, the IMF agreed to new rules guiding lending for large-scale, difficult programs. It now has embraced a greater reliance on “reprofiling”—restructurings aimed at keeping creditors in the game through an extension of maturities with little loss in market value—and wants its lending in risky, high-profile cases to be limited to situations where there is significant burden sharing with other official creditors. This solution, designed with Greece (and Europe more generally) in mind, does little to address a possible crisis in Latin America (or other places where there isn’t a group of official creditors willing to provide junior financing). Hopefully, this will trigger a broader debate about how to allocate the burden of financing these packages. The answer to that question will determine whether the Fund is an effective leader of the global effort to prevent and resolve crises. Stay tuned.

Looking Ahead: Kahn's take on the news on the horizon

Time could be running short for a Venezuelan government facing a deep recession, severe shortages, and hyperinflation—a debt default could come this year.

The risk of a maxi-devaluation continues to weigh on Chinese markets.

Negative interest rates have become more common in the industrial world, raising questions over whether central banks have the capacity to lift growth.

1 This newsletter draws on a longer analysis of the Fund’s record and future challenges.