How America Stacks Up: Economic Competitiveness and U.S. Policy compiles all eight Progress Reports and Scorecards from CFR's Renewing America initiative in a single digital collection. Explore the book and download an enhanced ebook for your preferred device.

Nearly three decades after the last major tax overhaul, both Democratic and Republican parties and President Barack Obama agree that cutting the corporate tax rate and taxing foreign profits differently would move the tax system in the right direction. The outdated corporate tax system does not raise as much revenue as the systems of most other rich countries, even as U.S. corporate profits have reached record highs, according to a new progress report and scorecard from the Council on Foreign Relations' Renewing America initiative. 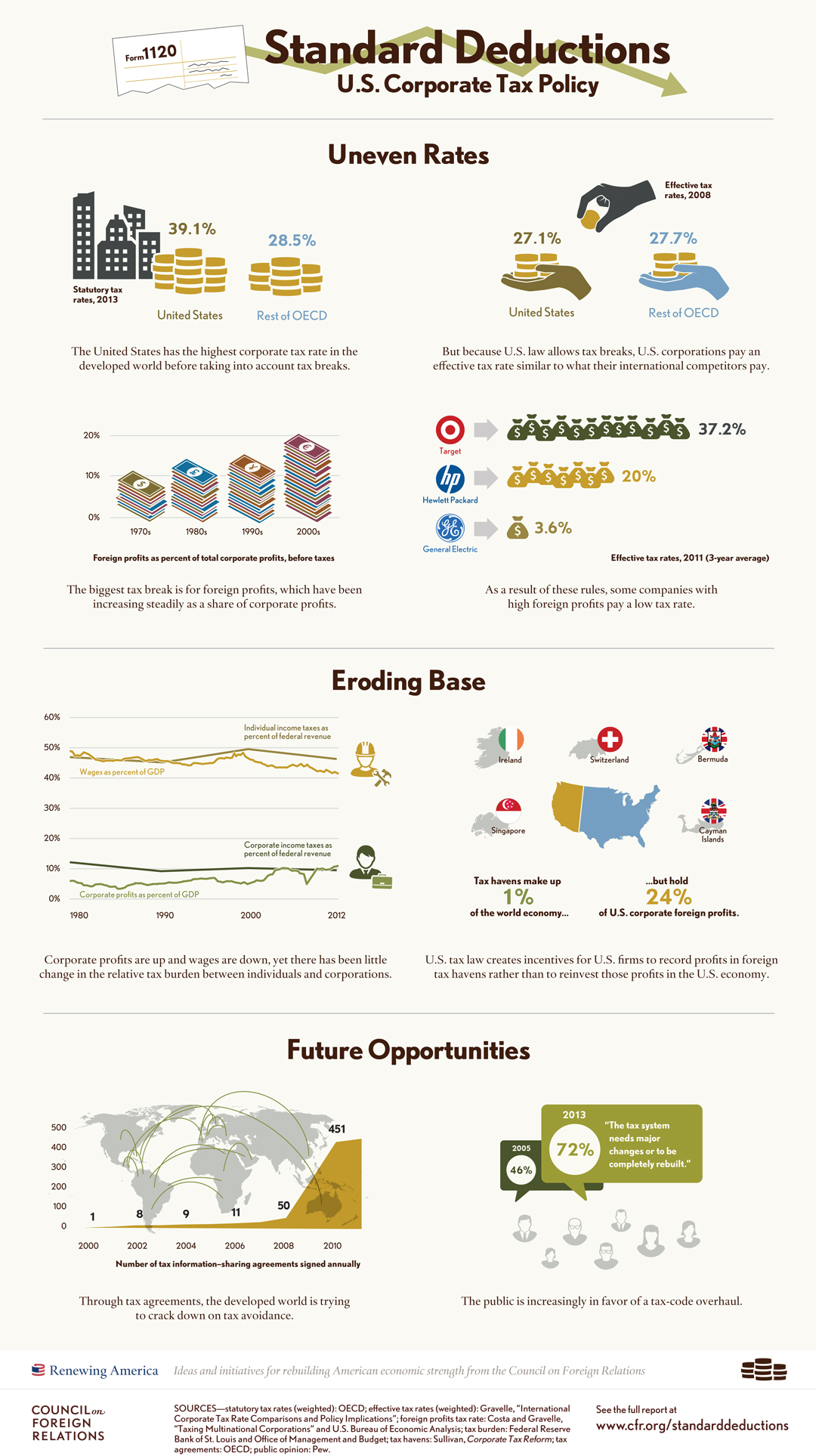 The U.S. corporate tax rate is the highest in the developed world, at 39.1 percent, and has remained largely unchanged since the last major overhaul in the mid-1980s. However, due to tax breaks and taxes deferred on foreign profits that stay abroad, the effective tax rate paid by U.S. corporations is much lower. In 2008, it was at 27.1 percent compared to 27.7 percent for the rest of the OECD.

The biggest tax break is for foreign profits, which have been increasing steadily as a share of corporate profits. The United States stands apart from most other developed countries in the way it handles other foreign profits. In practice, the U.S. tax is only levied if and when profits are repatriated to the United States. As a consequence, U.S. corporations keep most of their foreign profits abroad—as much as $2 trillion is currently retained offshore.

Additionally, corporations pay highly uneven tax rates depending on whether they qualify for these tax breaks, with research-intensive multinational companies paying much lower rates, for example, than domestic retailers.

Yet recent reform attempts have failed, including Republican Representative Dave Camp’s ambitious 2014 proposal. Comprehensive tax reform may have to wait until after the 2016 Presidential election. The general contours of a likely reform have been drawn—cutting corporate rates, evening out effective rates, and taxing foreign profits differently.

Congressional leaders have said comprehensive tax reform is not possible until after the 2014 elections. The general contours of a likely reform have been drawn—cutting corporate rates, evening out effective rates, and taxing foreign profits differently.

Read Alden and Strauss's op-ed on their report findings on Fortune.com.

This scorecard is part of CFR's Renewing America initiative, which generates innovative policy recommendations on revitalizing the U.S. economy and replenishing the sources of American power abroad. Scorecards provide analysis and infographics assessing policy developments and U.S. performance in such areas as infrastructure, education, international trade, and government deficits. The initiative is supported in part by a generous grant from the Bernard and Irene Schwartz Foundation.