Skip to main content
The Dilemma of Humanitarian Intervention

Syria’s widening civil war and the growing toll on civilians have raised new debate about the international community’s responsibility to mount a humanitarian intervention by outside forces. But any such efforts seem overshadowed by the Libya experience. In 2011 the UN Security Council invoked the "responsibility to protect" doctrine and adopted Resolution 1973, endorsing a no-fly zone over Libya and authorizing member states to "take all necessary measures" to protect civilians under attack from Muammar al-Qaddafi’s government. Western-led air strikes ultimately ousted Qaddafi from power and prompted criticism from Security Council members like Russia that the R2P doctrine was cover for a regime change strategy. Experts say such sentiments, combined with concern about the way Libya’s upheaval spilled over into the region, have given pause to humanitarian interventions backed by regional or global bodies. 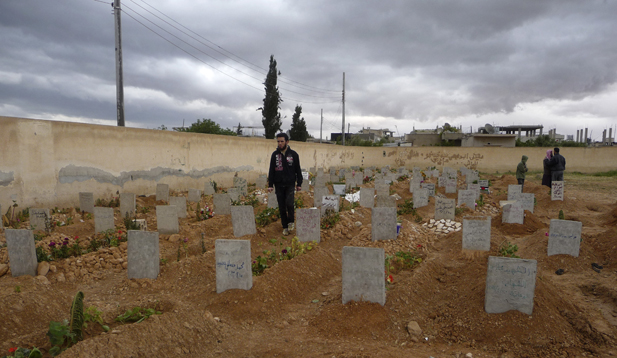 Graves of people killed in clashes between rebels and the Syrian government in Qusayr, Syria. (Photo: Courtesy Reuters)
More From Our Experts
David J. Scheffer
Forging a Cooperative Relationship Between ICC and a Special Tribunal for Russian Aggression Against Ukraine

The United Nations, formed in the aftermath of World War II to promote peace and stability, recognizes the importance of sovereignty, especially for newly independent nations or those seeking independence from colonizers. The UN Charter says: "Nothing contained in the present Charter shall authorize the United Nations to intervene in matters which are essentially within the domestic jurisdiction of any state." The principle does not rule out the application of enforcement measures in case of a threat to peace, a breach of peace, or acts of aggression on the part of the state. The Genocide Convention of 1948 also overrode the nonintervention principle to lay down the commitment of the world community to prevent and punish. Yet inaction in response to the Rwanda genocide in 1994 and failure to halt the 1995 Srebrenica massacre in Bosnia highlight the complexities of international responses to crimes against humanity.

In 2000, the Canadian government and several other actors announced the establishment of the International Commission on Intervention and State Sovereignty (ICISS) to address the challenge of the international community’s responsibility to act in the face of the gravest of human rights violations while respecting the sovereignty of states. It sought to bridge these two concepts with the 2001 Responsibility to Protect (R2P) report (PDF). A year later, the co-chairs of the commission, Gareth Evans of the International Crisis Group and Algerian diplomat Mohamed Sahnoun, wrote in Foreign Affairs: "If the international community is to respond to this challenge, the whole debate must be turned on its head. The issue must be reframed not as an argument about the ’right to intervene’ but about the ’responsibility to protect.’"

More From Our Experts
David J. Scheffer
Forging a Cooperative Relationship Between ICC and a Special Tribunal for Russian Aggression Against Ukraine

The doctrine was hailed by international affairs specialists as a new dawn for peace and security. In a 2007 Council Special Report, former CFR senior fellow Lee Feinstein wrote that the adoption of R2P was a watershed moment, "marking the end of a 350-year period in which the inviolability of borders and the monopoly of force within one’s own borders were sovereignty’s formal hallmarks."

Initially, the doctrine was most notably applied to mediate Kenya’s post-election violence in 2008, which political scientist Ramesh Thakur refers to as the "only successful R2P marker to date" (TOI). Following the mass atrocity crimes spawned by the highly disputed election in Kenya, other nations swiftly applied political and diplomatic pressure to stop violence and encourage a political solution that resulted in a coalition government. Before being cited explicitly in 2011 in reference to the situation in Libya, the Security Council invoked the R2P doctrine for the first time in its 2006 resolution expanding the UN mission in Darfur.

Some instances in the recent past have also suggested countries in Asia might be warming to humanitarian aid intervention. In the 2004 Indian Ocean tsunami, one of the worst-hit areas was Indonesia’s Aceh Province, where the government had been fighting a secessionist movement for more than four decades. The province, under martial law, was off-limits for most international human rights groups, aid organizations, and reporters. But after initial hesitation, the Indonesian government allowed international aid in what Elizabeth Ferris and Lex Rieffel of the Brookings Institution call "one of the largest disaster recovery and reconstruction efforts in modern times," and also resulted in a "peace agreement, which led to the election of a former secessionist leader as governor of the province."

Similarly, after a powerful 2005 earthquake rocked the long-disputed Kashmir region dividing India and Pakistan, the Pakistani government decided to give access to international relief agencies. In addition, an earthquake in China’s Sichuan Province in May 2008 led Beijing to make unprecedented moves to open up. The Chinese government, which in the past has spurned foreign aid, accepted international aid publicly, opened a hotline for the U.S. military to have increased communication with its Chinese counterparts, and eased media restrictions.

The 2005 UN document also emphasized prevention: "We also intend to commit ourselves, as necessary and appropriate, to helping States build capacity to protect their populations," the document said, "and to assisting those which are under stress before crises and conflicts break out."

But some rights activists and journalists who focus on humanitarian affairs have said regime change should sometimes be part of the process of protecting populations. David Rieff, a journalist who specializes in humanitarian issues, wrote in the New York Times Magazine in June 2008: "Use any euphemism you wish, but in the end these interventions have to be about regime change if they are to have any chance of accomplishing their stated goal." In the wake of the 2011 crisis in Libya, following calls for regime change, Thakur also argued: "R2P is not solely about military intervention but, if it is to have any meaning at all, must include that option as a last resort."

Russian officials have vowed to block further efforts at Security Council-endorsed interventions even amid humanitarian suffering. "The international community unfortunately did take sides in Libya and we would never allow the Security Council to authorize anything similar to what happened in Libya," Russian foreign minister Sergei Lavrov told Australian TV in January 2012.

Increasingly the intervention in Libya is becoming regarded as unique, and there appears to be less of an appetite for destroying the baseline order in states, regardless of how odious a state may be, says Stewart M. Patrick, CFR senior fellow and director of the program on international institutions and global governance.

"Libya has exposed fissures within the international community and brought to the fore conflict not only in the Security Council permanent members but also among many developing countries that have long been lukewarm about the concept" of R2P, Patrick says.

Beyond operational and political questions, military intervention also involves legal issues, says CFR’s Matthew Waxman. "Humanitarian/military intervention outside of a UN Security Council mandate remains a very highly contested area of international law," he says. And Russia and China have historically been reluctant to support any form of intervention. Besides their long-standing noninterference policy in the internal affairs of other countries, they are "particularly worried that it could create a precedent for the international community to have a say in how they treat their own, sometimes restive, minority populations," says CFR’s Patrick.

The willingness to use armed force is also inevitably influenced not only by the desperation of the affected population but also by geopolitical factors, including the relevance of the country to the world community, regional stability, and the attitudes of other major players, say experts.

The U.S. role as standard bearer for the R2P concept remains a question. It has been reluctant to commit to a forceful intervention in Syria, limiting itself to announced plans to arm the opposition and working with Russia to try to convene a peace conference bringing together the Assad regime and rebels. CFR’s Waxman says the U.S. nation-building experiences in Iraq and Afghanistan have demonstrated the on-the-ground challenges faced after U.S.-led interventions. "The United States has limited power to help put these countries back together after regimes collapse in ways that ensure that rights and safety of the local populations are maintained," he says.

President Obama’s appointment in June 2013 of two top officials who have been outspoken in the past on humanitarian intervention--Susan Rice as national security adviser and Samantha Power as UN ambassador--prompted discussions about whether he might be signaling willingness to intervene in humanitarian crises. But a number of analysts have cautioned against taking too simplistic a view about the roles Rice and Power will play. "Both Rice and Power have moderated their views on U.S. military intervention abroad over the years, in large part because of the backlash from the wars in Iraq and Afghanistan, preferring to resort to diplomatic pressure, ’moral suasion,’ and other tools," writes the National Journal’s Michael Hirsh.

At present, the world community has limited options for responding to humanitarian crises. UN General Assembly Resolution 46/182 formed guiding principles for states’ response to humanitarian disasters and was central to the establishment of the office of the UN emergency relief coordinator and the development of the Inter-Agency Standing Committee.

But the General Assembly resolution reiterates that "the sovereignty, territorial integrity, and national unity of States must be fully respected in accordance with the Charter of the United Nations," which makes it difficult to operate in situations where the affected country denies access. In such cases, the role of regional actors and neighbors becomes critical.