Skip to main content
The Muslim Insurgency in Southern Thailand

Over the past four years, an insurgency in Thailand’s southern, predominantly Muslim provinces has claimed nearly three thousand lives. The separatist violence in these majority Malay Muslim provinces has a history traceable back for more than half a century. Some experts say brutal counterinsurgency tactics by successive governments in Bangkok have worsened the situation. Political turmoil in Bangkok and tussle between supporters of former Prime Minister Thaksin Shinawatra and the country’s military have further contributed to the instability, working to stymie any serious initiatives for a long-term solution to the crisis.

Thailand has faced secessionist movements since it annexed the independent sultanate of Patani [Note: Thailand’s annexed sultanate is spelled "Patani"; the country’s southern province is spelled "Pattani"] in 1902, making the area the southernmost tip of the country. A policy of forced assimilation enraged the ethnically Malay Muslims, who represent the majority in the region. Many of the region’s Muslims adopted Thai names and the national language. But local traditions were secretly cultivated, and between the 1940s and the 1980s separatists staged a series of opposition uprisings. The insurgency is largely confined to the three provinces of Pattani, Yala, and Narathiwat and five districts of Songkhla province—Chana, Thepa, Na Thawi, Saba Yoi, and Sadao. An August 2008 report by the International Crisis Group says the religious, racial, and linguistic differences between the minority Malay Muslims and the Buddhist majority in Thailand have led to a deep sense of alienation (PDF). Malay Muslims also harbor resentment against the country’s security forces for past and continuing human rights abuses, including extrajudicial killings and forced disappearances, the report says. Poor socio-economic conditions add to regional discontentment with the Thai government. 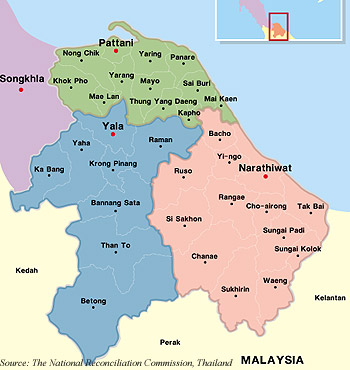 In the 1980s, the Thai government reversed its assimilation policy under the premiership of General Prem Tinsulanonda. Prem supported cultural rights and economic development in the historically marginalized region, and also worked with the Malaysian government to enhance security in the southern border area. By the late 1990s, the separatist movement fell quiet. But when Thaksin Shinawatra became prime minister in 2001, a new series of separatist attacks began. His government responded aggressively, causing renewed bloodshed. Many blame his reaction for exacerbating tensions. Joseph Liow Chin Yong, an expert on Southeast Asian Muslim politics at the S. Rajaratnam School of International Studies in Singapore, says the current violence stems from Thaksin’s "policy missteps, one after another."

The latest conflict, since 2004, is in part a consequence of bad government policies, experts say. First the heavy-handed approach by Thaksin’s government, and then the lack of any real progress addressing the South’s grievances by successive military and civilian governments, have led to continued violence.

Even after a civilian government came into power in January 2008, the insurgency-ridden South continued to be under martial law as well as the emergency decree. Experts say together they granted more power to the security forces than ever before.

Negotiating with the Insurgents

One of the biggest obstacles in controlling the insurgency is the government’s inability to identify who is orchestrating insurgent attacks. No group has claimed responsibility for the attacks or made specific demands. "Keeping quiet has worked to [the insurgents’] advantage, baffling the Thai security forces, and giving them a mysterious aura," writes Zachary Abuza, a Southeast Asia terrorism expert at Simmons College in Boston. With no specific groups stepping forward to demand concessions, the government has attempted to solve the problem by negotiating with longstanding separatist groups. Liow says this signals that the insurgents "have the upper hand" over the Thai state and have no need "to reach out for the olive branch that is being offered." However, Bangkok has engaged in talks with some of the following groups it thinks play a role in the insurgency:

Foreign support—whether in the form of arms, money, or ideological influence—for the southern separatist movement remains difficult to ascertain due to a lack of clarity over the groups responsible for attacks. Croissant suggests that educational opportunities extended to Thai Muslims by Islamic nations have functioned as a kind of Trojan horse for outside influence. Thai Muslims, long denied equal educational opportunities, study abroad in the Middle East and Pakistan. Many return to Thailand to instruct in southern religious schools, causing a surge in more radical Islamic teachings in recent years. But while Thai militants may increasingly use the language of jihadi extremism, the movement remains local, writes Liow in a report published by the East-West Center. He says ascribing the character of the current insurgency "to the seductive appeal of radical Islam is a gross simplification" of a complex situation involving "politics, nationalism, history, and identity." A 2008 paper (PDF) by the Rand Corporation argues "precisely because Thailand’s southern border provinces continue to be characterized by an extremely strong sense of Malay-Muslim self-identity, they have a built-in barrier against external penetration."

Malaysia plays a historical role in the southern separatist movement, not just because its proximity has allowed insurgent leaders to slip across the border, but because the majority of Thai Muslims are ethnically Malay and some groups have argued that joining Malaysia would be preferable to remaining a part of Thailand. While there is frequently a diplomatic salvo of allegations and responding denials from Bangkok to Kuala Lumpur alleging that militants are being trained in Malaysia, there is little evidence to prove that this is indeed the case, writes Abuza in the Terrorism Monitor. From the Malaysian perspective, one of the root causes of the problem is poor socio-economic conditions. Ian Storey, a fellow at the Institute of Southeast Asian Studies in Singapore, writes in the March 2007 Terrorism Monitor that the Malaysian government does not support the southern insurgency and, fearing spillover into its own territory, has a vested interest in seeing stability return to the area. However, he writes, there is a lot of sympathy from people in the northern Malaysian states for their ethnic brethren across the border.

Experts say it will help if there is more representation by Malay Muslims in the local administrative structure. This ICG report (PDF) says the government must address areas of education, past injustice, and development. The insurgency-ridden provinces are some of the poorest provinces in Thailand. To boost economic development in the area, the government included them in the Indonesia-Malaysia-Thailand Growth Triangle, started a special economic development zone with tax incentives for those willing to invest in the area, and is working bilaterally with Malaysia to develop the border region. However, some experts remain skeptical about the prospects for these efforts, particularly as violence continues.

A Role for the United States

The insurgency in Thailand has important implications for the United States as Bangkok is a long-term military ally in the war against terrorism in Southeast Asia and a significant trade and economic partner. Thailand also contributed troops and support for U.S. military operations in both Afghanistan and Iraq and was designated as a major non-NATO ally by President Bush in December 2003. Its airfields and ports play a significant role in U.S. global military strategy, including having served as the primary hub of the relief effort following the 2004 Indian Ocean tsunami. Nicholas P. Vavich, a major in the U.S. Marines, argues in this paper (PDF) that the insurgency’s potential to expand in the future poses a threat to U.S. strategic interests in the region. He writes Washington should work closely with the Association of South East Asian Nations (ASEAN) to help resolve the conflict and tie future U.S. aid to Thailand to improved democratic reform, human rights, and projects to stimulate growth and jobs in the south.