Khaled Meshal has led Hamas since 2004. Because he lives in exile in Syria, Meshal sometimes escapes the media attention that focuses on the Palestinian territories. The June 25, 2006 abduction of an Israeli soldier, and Israel’s subsequent invasion of Gaza, thrust Meshal into the spotlight. Israeli Vice Premier Simon Peres accused Meshal of ordering the abduction. Operating free of Israeli restraints, Meshal has served as Hamas’ top ambassador, raising crucial funds for Palestinians at a time when the United States and European Union have cut aid. After the Hamas electoral victory in the Palestinian territories, Meshal said the group was ready to negotiate what he called a just peace with Israel, but the movement’s failure to renounce violence and his role in the recent escalation may bring further pressure on him.

Who is Khaled Meshal?

Born in 1956 in the West Bank village of Silwad, Meshal has lived most of his life outside the Palestinian territories. In 1967, his family moved to Kuwait, where his father served as an imam in a local mosque. During the 1970s Kuwait was a hotbed of Arab nationalism and pro-Palestinian sentiment, and at the age of fifteen, Meshal joined the Muslim Brotherhood. Later, while studying physics at Kuwait University, he founded a student group called the List of the Islamic Right.

When Hamas was founded in 1987, Meshal was still living in Kuwait. He became very active with the organization, eventually leading its Kuwaiti chapter. After the 1990 invasion of Kuwait by Iraq, Meshal moved to Jordan where he became head of the Hamas branch in that country. In 1999, he was briefly imprisoned and then expelled when Jordan’s King Abdullah closed the local offices of Hamas. He spent two years in Doha, Qatar before leaving his family behind and moving to Damascus, where he currently resides.

How does Meshal lead Hamas in exile?

Though he is the top-ranking Hamas official, Meshal cannot return to the Palestinian territories for fear that he will be arrested or killed by Israeli authorities. Ismail Haniyeh serves as prime minister of Hamas’ government, which came to power after elections in the Palestinian territories in January, but he does not control the broader Hamas organization. Some experts believe Haniyeh had no advance knowledge of the attack resulting in the abduction of the Israeli soldier. The dynamic between Meshal and Haniyeh has been closely analyzed. "There’s a lot of speculation as to whether they have philosophical differences," says David Schencker, senior fellow at the Washington Institute for Near East Studies. "They certainly have different interests." 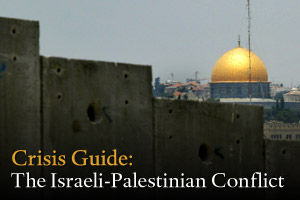 Because he lives outside the Palestinian territories, Meshal is not confined by the travel restrictions Israel has put on other Hamas leaders. He is able to serve as Hamas’ top diplomat, traveling to and negotiating with other nations. Seen as charismatic and possessing diplomatic skills, Meshal is "welcomed with open arms in various capitals and he’s seen as a legitimate political actor," Sadick says. Since Hamas’ electoral victory in January 2006, Meshal has served as its representative in talks with the Egyptian and Russian governments, as well as the Arab League. He even met with a group of retired U.S. diplomats in February. Following that meeting, Edward Peck, a former ambassador to Iraq, told The Times of London that Meshal seemed to be "moderate in many senses" and "entirely rational."

Meshal’s travels also afford him the opportunity to raise money, which has become crucial since the United States and European Union cut their shipments of aid to the Palestinian Authority when the Hamas government refused to renounce violence and recognize Israel. In April 2006 alone he raised $100 million from Iran and Qatar.

For fear of assassination, Meshal does not make regular public appearances. Nevertheless, he has become a prominent spokesman for Hamas, giving newspaper interviews, holding occasional press conferences, and even writing an op-ed in Britain’s Guardian in which he said Hamas was ready to negotiate a just peace with Israel.

However, Meshal defends Hamas’ use of violence as a legitimate means of resistance to an occupation. He insists that Palestinian rights have been trampled by Israel and ignored by the international community. In an interview with the BBC, he indicated a long-term, albeit limited, truce would be possible if Israel were to withdraw to the pre-1967 borders. He explained that Palestinians were "kicked out of their land in 1948—the international community must find a solution for those people."

Will Israel try to apprehend Meshal?

Israel has targeted Hamas leaders for assassination in the past, and experts say this is a concern for Meshal: He survived a botched assassination attempt by Israeli intelligence agency Mossad in 1997 when he was still living in Jordan. In that episode, Mossad assassins broke into the building where he was sleeping and injected poison into his ear. Jordanian authorities discovered the plot and captured two of the Israeli agents. King Hussein was outraged by the incident and demanded Israel provide an antidote, which it did reluctantly. Schencker suggests Meshal will probably be safe in Damascus, "The Israelis couldn’t get him in Jordan," he says, "It’s a little more difficult in Syria."