Consider the following graph, which shows the Middle East’s oil export revenues over time.* For the calculations, I assumed oil will average $120 a barrel in 2008. That is on the high side – as oil would have to average more than $120 a barrel over the remainder of the year to bring the annual average up to $120. On the other hand, oil keeps on rising … 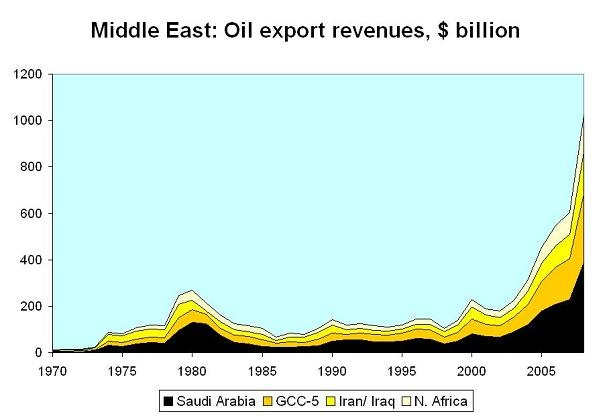 Looking at nominal dollars though can be a bit deceptive. Relative to world GDP, the Middle East’s surplus is actually a bit smaller this time around. 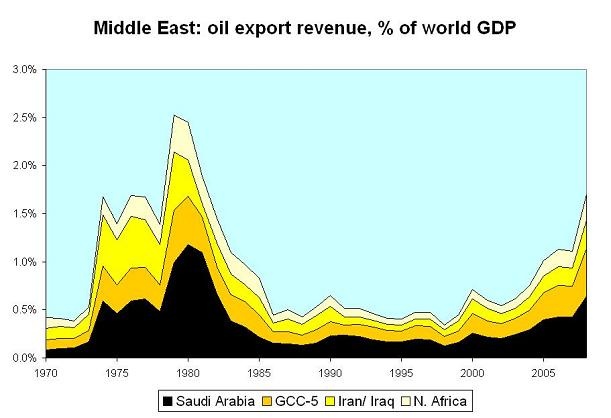 Real oil prices are back where they were in 79-80. But the world has become a bit less oil-intensive over time. A barrel of oil produces more output now than in the early 80s – or, alternatively, it takes a bit less oil to generate a dollar of output.

The oil importers though shouldn’t be celebrating too much. At least not the US. The following graph shows US and EU oil imports against the Middle East’s oil exports, both plotted against world GDP. 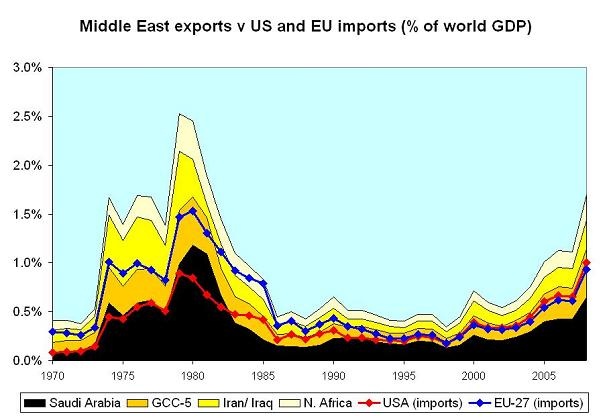 Two things jumped out at me.

Second, the relative position of the US and Europe have shifted. Back in the 1970s, Europe imported more oil (relative to world GDP) than the US. Now the US imports a bit more than Europe. Chalk that down to falling domestic oil production – and a vehicle fleet that is only ½ as efficient as Europe’s vehicle fleet.

The result: US oil imports are as large – relative to the world’s GDP – as in the 1970s, while Europe is importing less than in the 1970s.

What of the Gulf itself?

The conventional wisdom is that this boom is different from than past booms. The private sector is playing a bigger role in the Gulf’s current boom – the state less. This boom is driven by private investment, not state spending.

The Gulf is doing its best to spend its windfall. Stately pleasure domes are springing up all along the coast. Saudi Arabia announces six, no seven!, new economic cities, which it hopes will create millions of jobs for its restive, youthful population. There are worrying echoes of the wasteful 1970s. But this time round, more of the spending is being done by private companies, with an eye to consumer demand, rather than by states.

That argument has a grain of truth. But I also suspect that it overstates the differences. A lot of the rise in private investment is being supported by the state, in one way or another. And in many cases, there are very close ties between the state and private businesses. The families that own many key construction companies are often close to the families than run the state. Other big investors are owned by the state – or privately owned by the family that runs the state. That makes financing big projects a lot easier.

It also causes problems for those Gulf residents that aren’t busy flipping Dubai condos and plotting their next land deals. Their cost of living is rising rapidly. Roula Kalaf in the Financial Times:

But the upbeat mood has been marred by soaring inflation, which independent analysts estimate at 15 per cent in the United Arab Emirates and as much as 20 per cent in Qatar. Across the Gulf, both nationals and expatriates are complaining as rents climb and food prices surge. The pressure comes two years after many Gulf nationals were devastated by the collapse of stock markets, as state attempts to distribute oil wealth through initial public offerings turned sour.

.... Nor is it clear that the boom is creating sufficient employment for Gulf nationals, given the construction sector’s near total reliance on cheap foreign labour and the dire state of the region’s education systems. This may be less pressing a concern in countries with small national populations but it is putting governments in populous states such as Saudi Arabia under political pressure. “The corporate sector is making money but the man in the street does not feel better off; maybe some people feel even worse off,” says Anais Faraj, executive director at Nomura Investment Banking in Bahrain.

“The big beneficiaries of this boom are the companies but most employ non-locals, and at a certain level, the low-paid-level people, like secretaries, are hurting a lot,” argues Khalifa Jassim al-Thani, head of the chamber of commerce in Doha. “Over the past four years, prices of real estate have gone up four to five times.”

The Gulf continues to peg to the dollar (Kuwait is a partial exception, but even Kuwait still manages its currency primarily against the dollar)

Both reforms would tend to shift some of the region’s economic purchasing power out of state hands. A currency that rose with the price of oil would increase the external purchasing power of existing salaries. Government employees – and private workers – wouldn’t need to wait until their salaries were increased to benefit from the oil boom. Oil dividend payments would directly distribute the oil windfall to the gulf’s citizens.

Currency reform is not just a way to constrain inflation, but also a means of redistributing spending. At present, the petrodollars are converted into local money at a fixed rate and doled out as governments see fit. With stronger local currencies the state would get fewer dirhams, dinars or riyals for every petrodollar. But Gulf residents would be able to buy more with their money, and guest workers could send more rupees home to families in Kerala.

There is another way to transfer economic initiative from governments to people. At present the Gulf states buy social peace by doling out generous benefits and subsidies, such as cheap housing and medical care, expanding the public payroll and forcing private companies to hire locals in the name of Omanisation or Saudi-isation. ...

Could there be a better way? Last winter, 604,000 Alaskans each pocketed a $1,654 cheque from the state’s Permanent Fund, which invests Alaska’s oil revenues on their behalf. Each year, the fund distributes a fraction of its profits, averaged over five years, to every resident. ... In a region that likes to impress people with outlandish projects, paying a simple dividend cheque to every Gulf national would be a more audacious venture than the tallest new tower.

Both reforms have a second virtue: they would create mechanisms -- a weaker currency, smaller dividend payments -- that would help the Gulf adjust to falls in the price of oil -- and thus insulate it against the boom and bust cycle that has marked the region’s economic development.

Oil doesn’t only go up. Or so the oil-importing economies hope.

What keeps Zhou Xiaochuan up at night