China is running a persistent current account surplus, one that could be larger than officially reported (the huge tourism deficit looks a bit suspicious).

Reserves are down, but—from an external standpoint—China’s need for reserves is also down. The two year fall in short-term debt is actually about equal to projected drop in reserves.

The Fund though sees things a bit differently. Buffers, according to the Fund’s staff report, are now low, and need to be rebuilt. Some in the market agree.

For China, two “traditional” indicators of reserve adequacy—reserves to short-term debt and reserves to broad money—point in completely different directions.

Reserves are over 400 percent of short-term debt (way more than enough). ***

Reserves are now “only” 15 percent of broad money (not enough; 20 percent of M2 is the traditional norm).

You cannot really fudge the difference; you have to tilt one way or the other. (Hat tip to Emma Smith of the Council on Foreign Relations’ Greenberg Center for Geoeconomics, who prepared the charts). 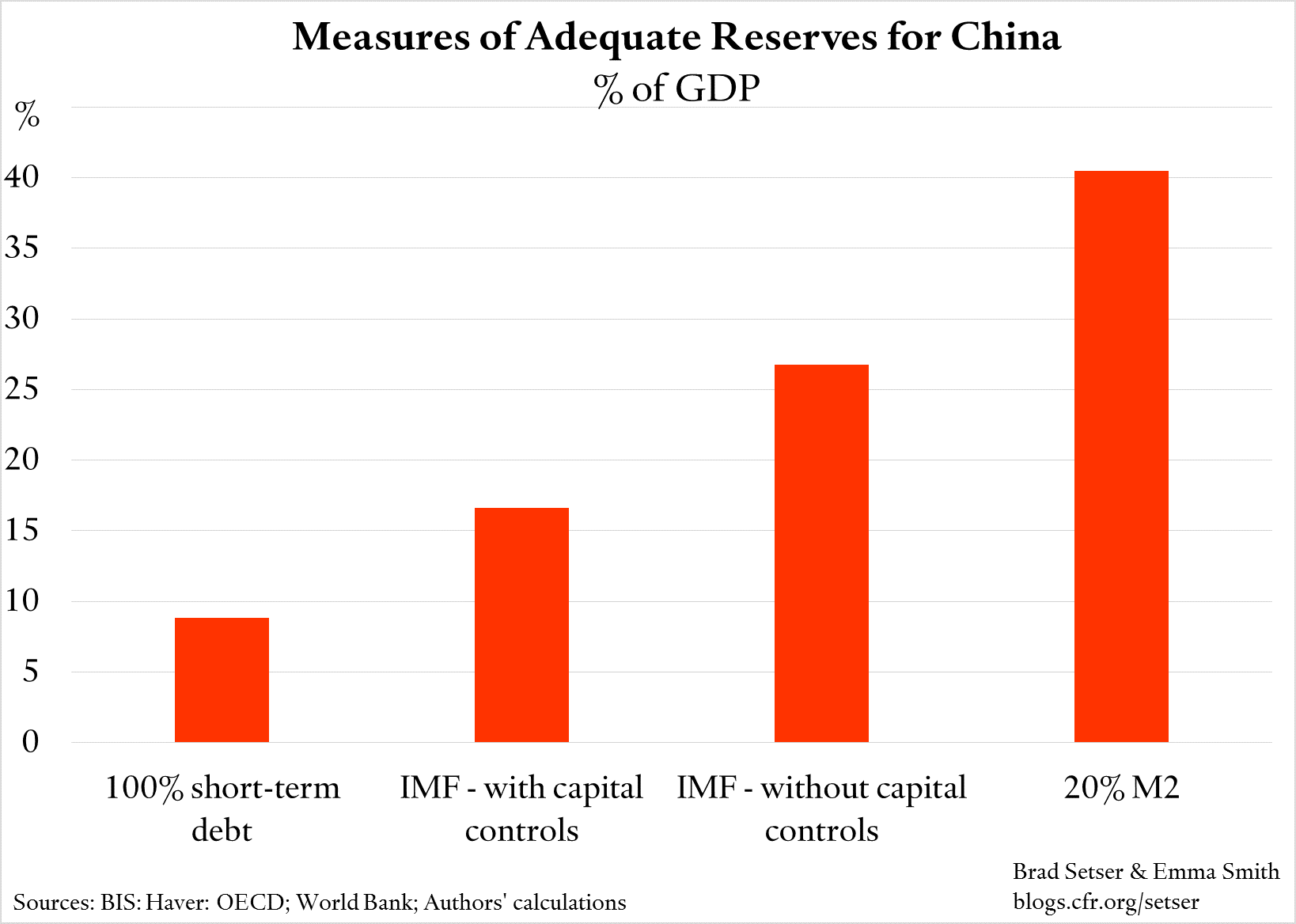 I personally put more stock on balance sheet indicators, and reserves to short-term external debt is the most important. From a balance sheet point of view, there is also a strong case for paying attention to reserves relative to domestic sight deposits (a measure of liability dollarization). The Fund though sees things differently; in the design of the new reserve metric the Fund leaned strongly against balance sheet indicators of reserve need (see the discussion of liabliity dollarization here), and instead went with a composite of the three traditional indicators (short-term debt, m2, and imports—though the Fund prefers using exports), with an additional factor for longer-term external liabilities.

The Fund’s reserve metric effectively says China needs to hold more reserves, relative to its GDP, than a typical emerging economy. Especially if China opens its financial account before its currency floats freely.

And that is the case even though China has much less external debt than a typical emerging economy, and also has less liability dollarization of its financial system. 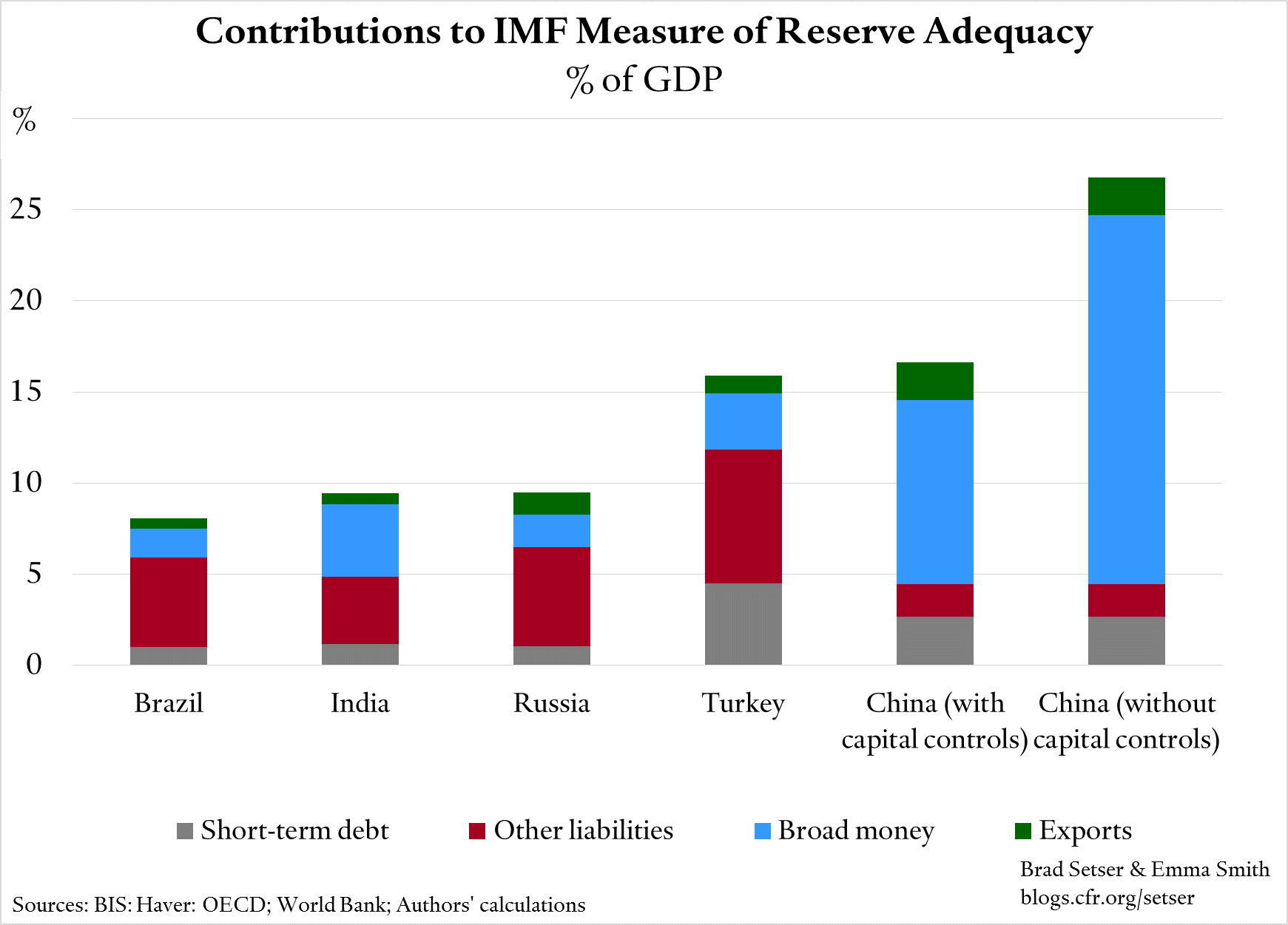 Personally, I think foreign currency deposits pose more risks than domestic currency deposits, and, to the extent a country should hold reserves against the risk of domestic capital flight, those countries with more domestic foreign currency deposits should hold proportionately more reserves. The Fund’s metric, though, explicitly doesn’t adjust for liability dollarization. As a result, the Fund believes China needs to hold far more reserves against the risk of domestic capital flight than other emerging economies, including emerging economies with a lot more domestic FX deposits. 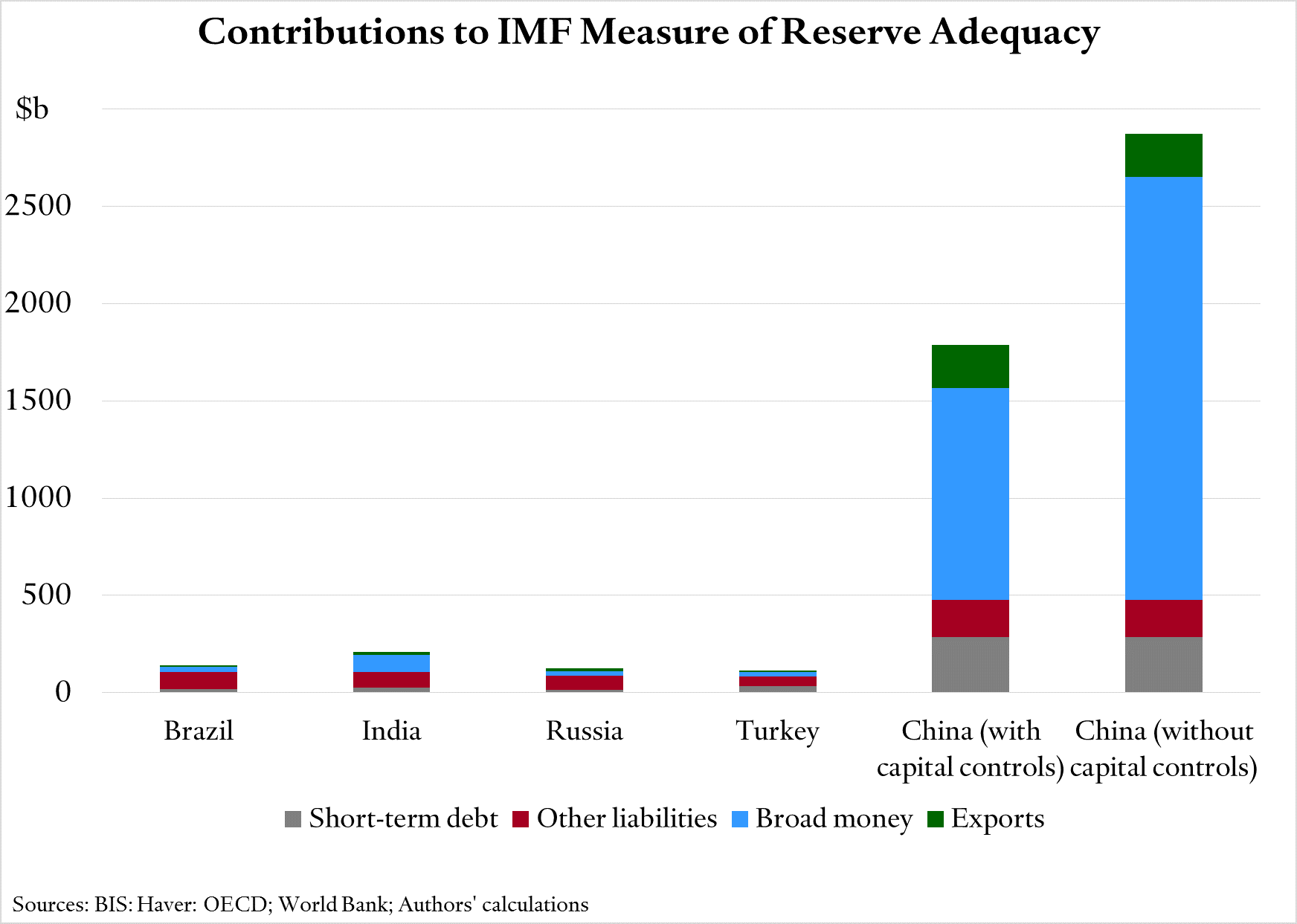 ** I will have more to say on this in an another post. There is a debate about the liquidity of China’s $3.2 trillion in reserves ($3.3 trillion counting other foreign assets). The key issue here is how China accounts for the foreign assets of China Ex-Im and China Development Bank (CDB). They shouldn’t technically be counted in reserves, but China’s hasn’t been completely clear on this point. The bulk of the evidence though suggests that China Ex-Im and CDB loans show up in the net international investment position in “loans” not as reserves, and that, to the extent these loans have been financed by entrusted reserves, those entrusted reserves are counted as “other foreign assets” in China’s SDDS disclosure of its foreign exchange reserves. In other words, the illiquid loans are not currently counted as part of China’s “foreign exchange reserves,” but rather appear elsewhere. China really should clarify this though. The IMF Article IV unfortunately did not shed new light on this issue.

**** The IMF generally requires 5 percent of M2 in its composite metric, or 25 percent of the standard M2 to GDP norm. That rises to 10 percent of M2 for countries with fixed exchange rates, so long as the financial account is open. With M2 to GDP running around 200 percent thanks to China’s high savings rate, and with China’s GDP projected to rise above $15 trillion over the next few years, this soon won’t be an academic debate.