A common explanation for low Treasury yields is that low rates outside the United States have piled into the U.S. market, as investors in Europe, Japan and elsewhere look to the United States for a reasonable mix of safety and yield.

That is part of what Gavyn Davies, in one of his typically thoughtful posts, argues that the Fed has learned over the past year. The United States is no longer a (monetary) island, the rest of the world matters. Of course, what Lael Brainard called the elevated sensitivity of exchange rate moves to monetary surprises is also a part of the global story. It isn’t just a flows story. An awful lot of the tightening in U.S. financial conditions that occurred in anticipation of the Fed raising rates came through dollar appreciation; too much in my view.

So what is going on? 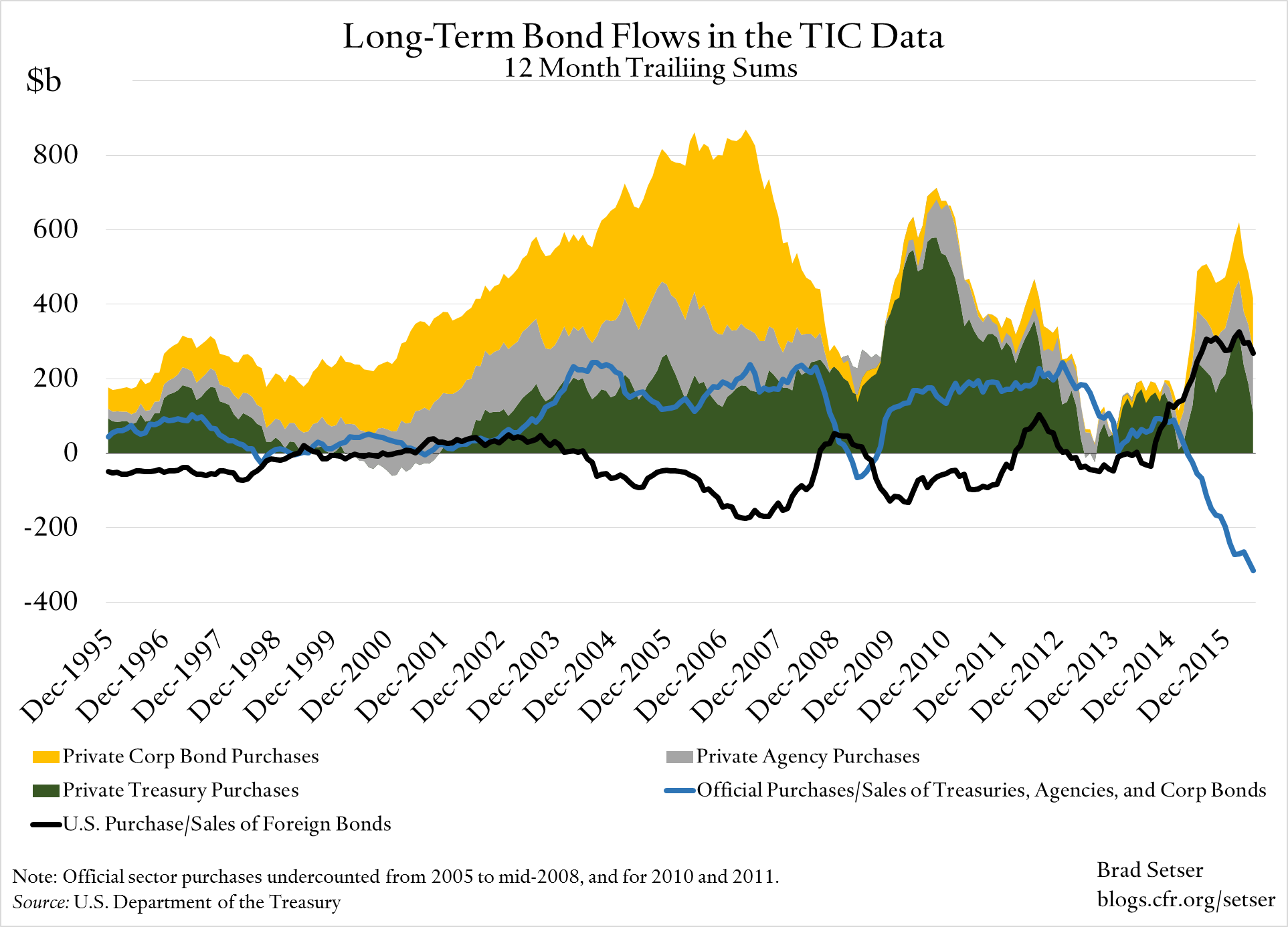 It is actually pretty simple, in my view. Treasury sales in the Treasury International Capital (TIC) data (and also, I suspect, most of the sales of U.S. equities) are linked to the fall in global reserves.

Over the last 12 months China has sold several hundred billion of reserves (though most of those sales were in the fall of 2015 and early 2016, recent sales are more modest), the Saudis have been selling and Japan—for reasons of its own—has been selling securities while increasing its deposits (Japan has reduced its long-term securities holdings by a bit over $100 billion over the last two years, while raising its short-term deposits by a similar amount, according to the SDDS data).

A plot of estimated growth in global reserves (I sum the reserves of a broad set of countries, and assume the currency distribution of reserves maps to the IMF COFER data on reporting countries) against official bond sales in the TIC data suggest the official sales are in line with the fall in global reserves. 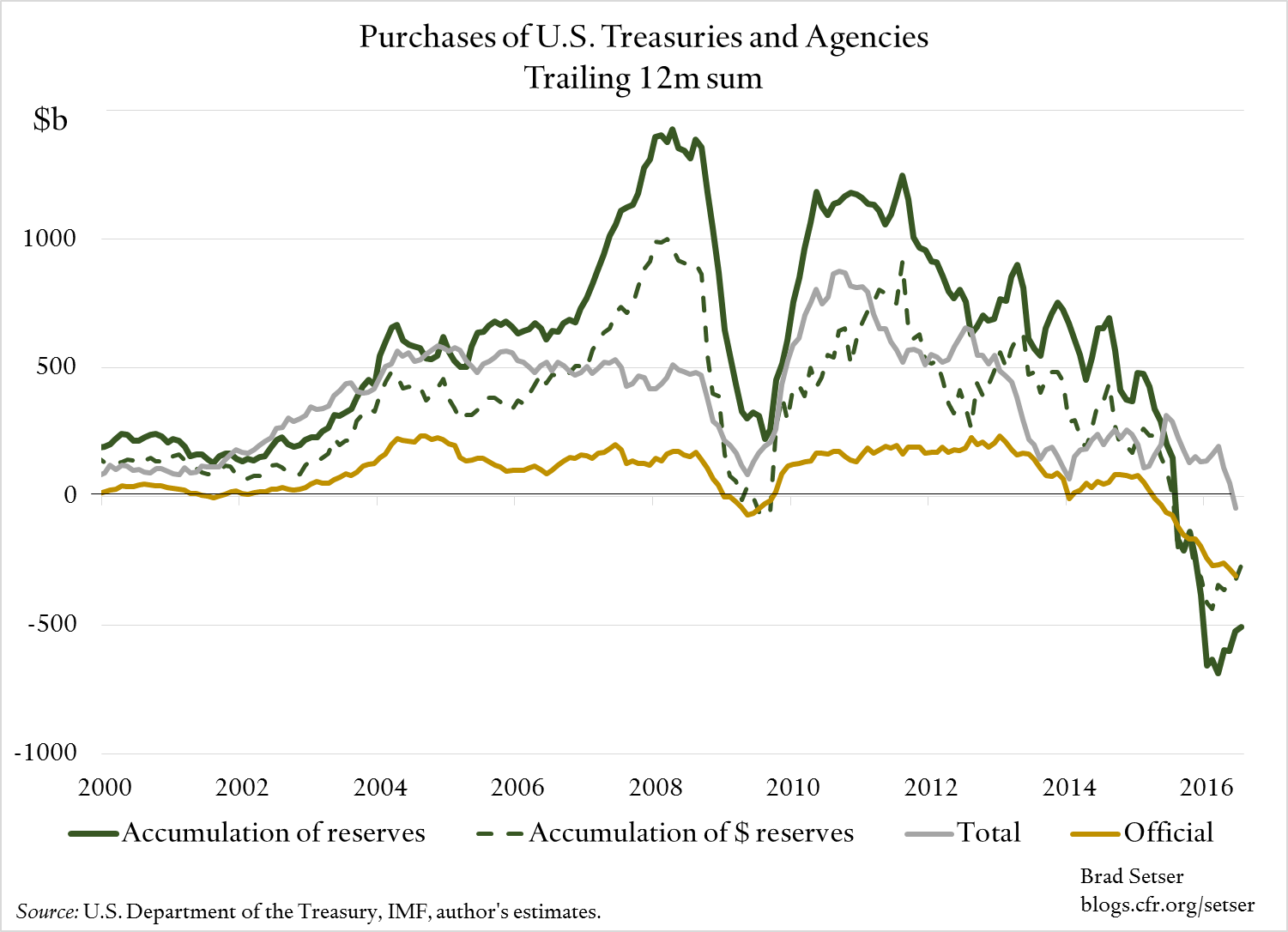 So why hasn’t the fall in official demand for Treasuries had an impact on Treasury yields?

Well, China’s reserve sales have come with a globally deflationary shock. The yuan has depreciated over the last year, and weakness in Chinese investment demand has pulled down commodity prices (the IMF estimated that between 20 and 50 percent of the fall in broad global commodity indices over the past few years is due to China; see paragraph 18). In that context, there is little reason to think China’s sales should be driving up U.S. yields. Particularly not when China’s current account surplus—and thus the net acquisition of foreign assets (or net reduction in foreign debt) by Chinese residents—is still around $250 billion (it was over $300 billion in 2015, but fell a bit in the first half of 2016).

Official Chinese sales of Treasuries are offset by a buildup of private Chinese assets abroad (even if they are hard to track) and the repayment of debts Chinese residents owe to the world’s banks. Big repayments too. The banks then have to park the funds formerly lent to China somewhere.

If you strip out official sales, foreign private demand for Treasuries looks solid.

And more importantly, foreign private demand for U.S. bonds of all kinds, including close substitutes for Treasuries, is actually pretty strong. Right now, unlike in many past periods (2005 to 2007 for example, or 2010 and 2011) I suspect most of the "private" purchases of Treasuries and Agencies in the TIC data are actually private purchases, not official purchases in disguise.

And then there is another, hidden source of inflows into the U.S. bond market. American investors, faced with low yields on their foreign bonds, have been selling off their foreign portfolio and bringing the proceeds home. To the tune of $270 billion over the last 12 months.

Sum up American selling a portion of their existing holdings of foreign bonds and bringing the money home and around $400 billion in foreign private purchases, and there is an almost $700 billion net inflow from private fixed income investors in to the United States.

One small subcomponent of all this: foreign investors have rediscovered their love for Agency bonds. You need to go back to the summer of 2007 to find as much foreign demand for long-term Agencies as was recorded in the TIC data this June.

Throw in the fact that the Fed is clearly in the process of rethinking the path of U.S. policy rates (and Larry Summers is rethinking the Fed’s policy target) and current U.S. yields are easier to understand.

China’s July Reserve Sales: Bigger, But Still Not That Big