Back in 2005, when Ben Bernanke first warned of the risk of a global savings glut, the combined savings rate of Asia’s main “surplus” economies (China, Japan, South Korea, Taiwan, Hong Kong, and Singapore) equaled 35 percent or so of their collective GDP.

That number now? About 40 percent. 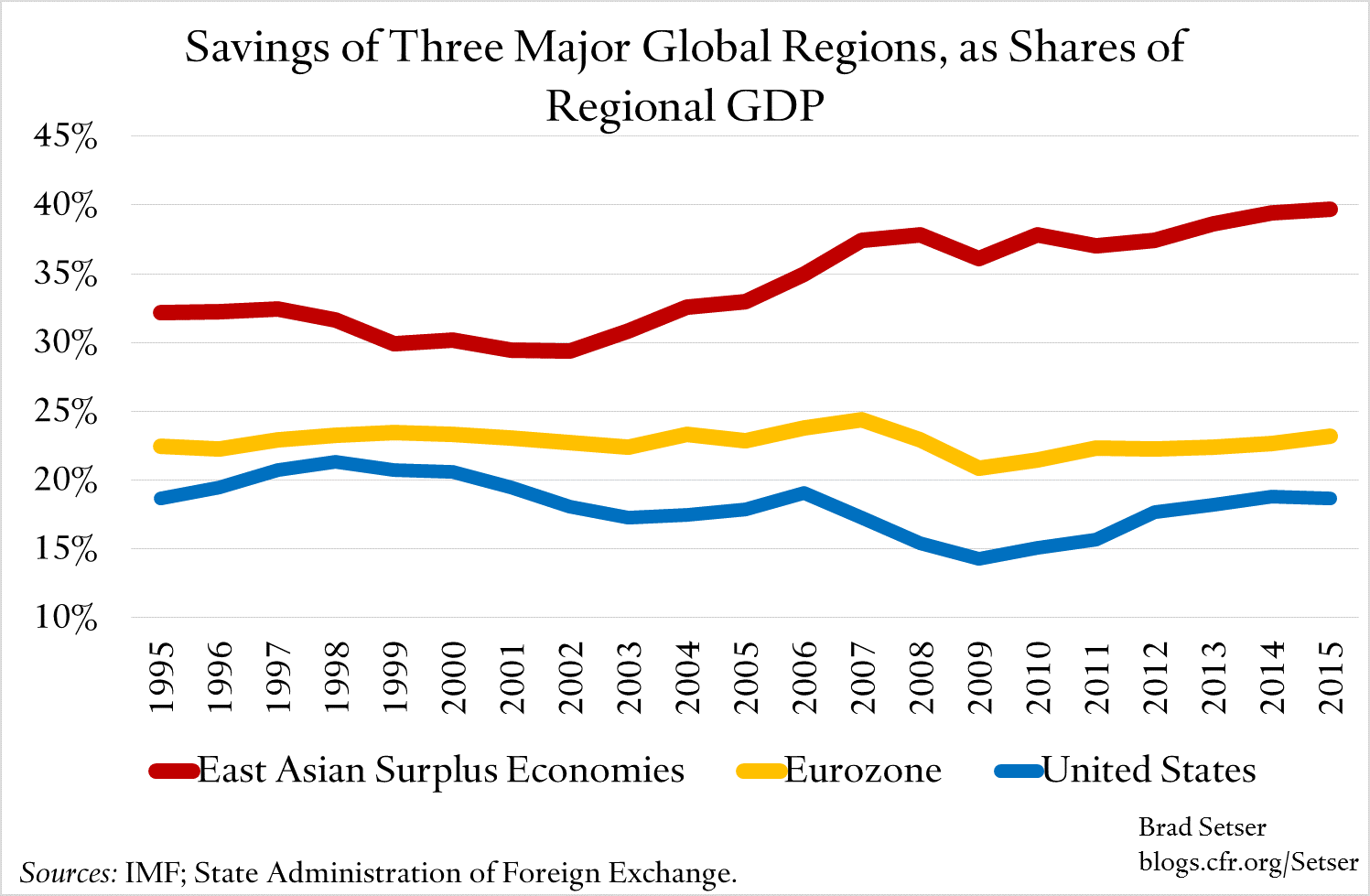 That is obviously a lot of savings—savings which either has to finance a very high level of investment at home or has to be exported to the rest of the world. And with low interest rates around the world, the world doesn’t especially need to import savings from Asia right now.

East Asia’s high level of savings is the subject, obviously, of my new CFR working paper.

Much is often made of the small fall in China’s national savings rate. China’s savings rate peaked at a bit over 50 percent of GDP; in 2015 it dipped to 48 percent. A fall, yes, but not a big one. Remember that the flip side of high savings is a low level of consumption; without high levels of investment, domestic demand growth can easily fall short.

In the aggregate data for Asia’s surplus countries, the rise in China’s share of the region’s output more than offsets the (modest) fall in China’s savings rate. The national savings rate in Korea and Taiwan has also increased over the last five years. Hence record regional savings.

In dollar terms, the jump in savings is even more spectacular. Asian surplus economies saved around $2.8 trillion back in 2005. Now they save around $7 trillion. China’s savings have increased from $1 trillion to more than $5 trillion. 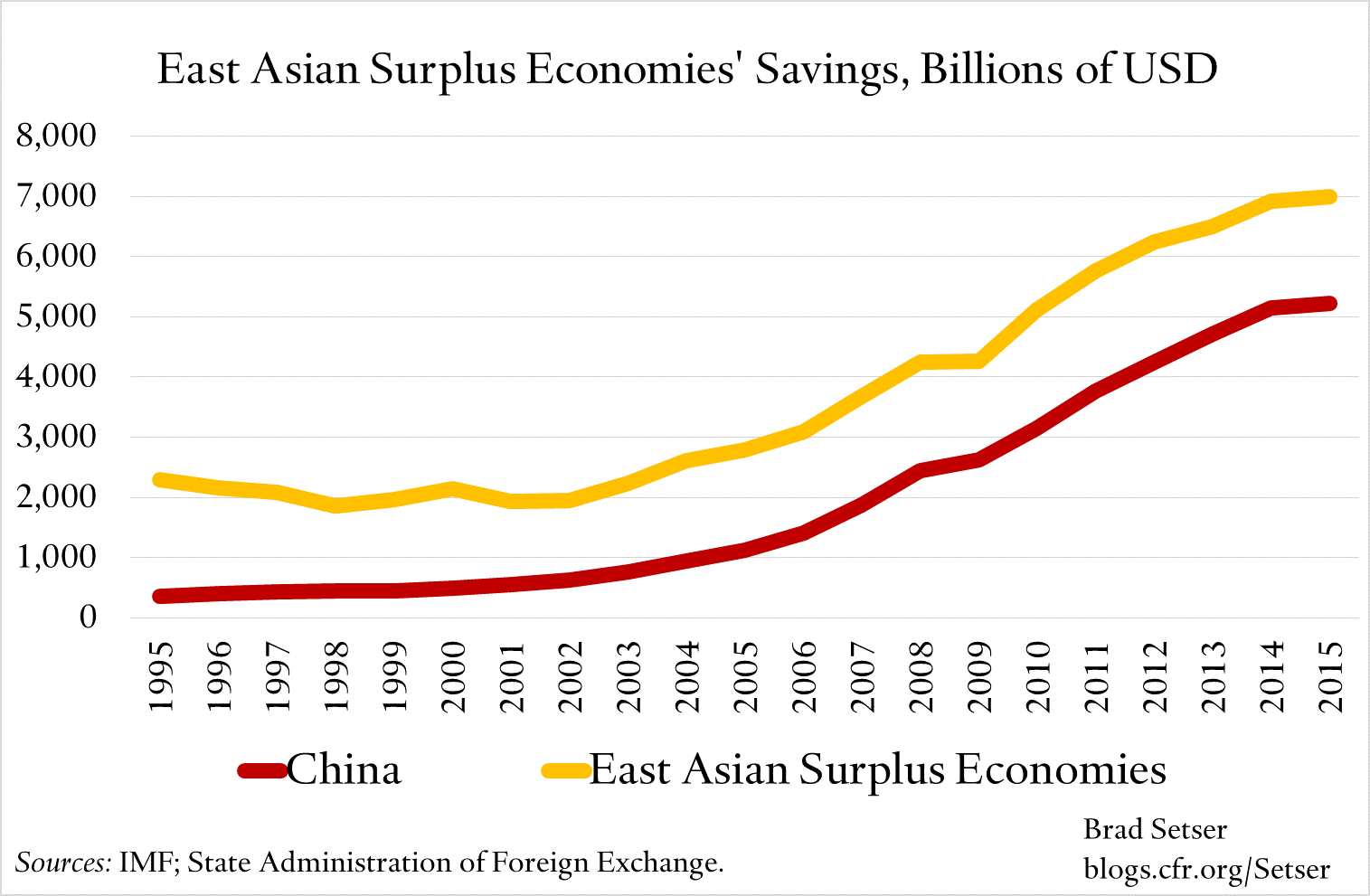 The dollar numbers matter in one important way. They illustrate the size of the supply of the raw material for East Asia’s large—$700 billion in 2015—external surplus.

And, along with Europe’s surplus, it contributes to a global glut in savings, one where real interest rates globally are depressed. Too much savings is chasing too few good investments. 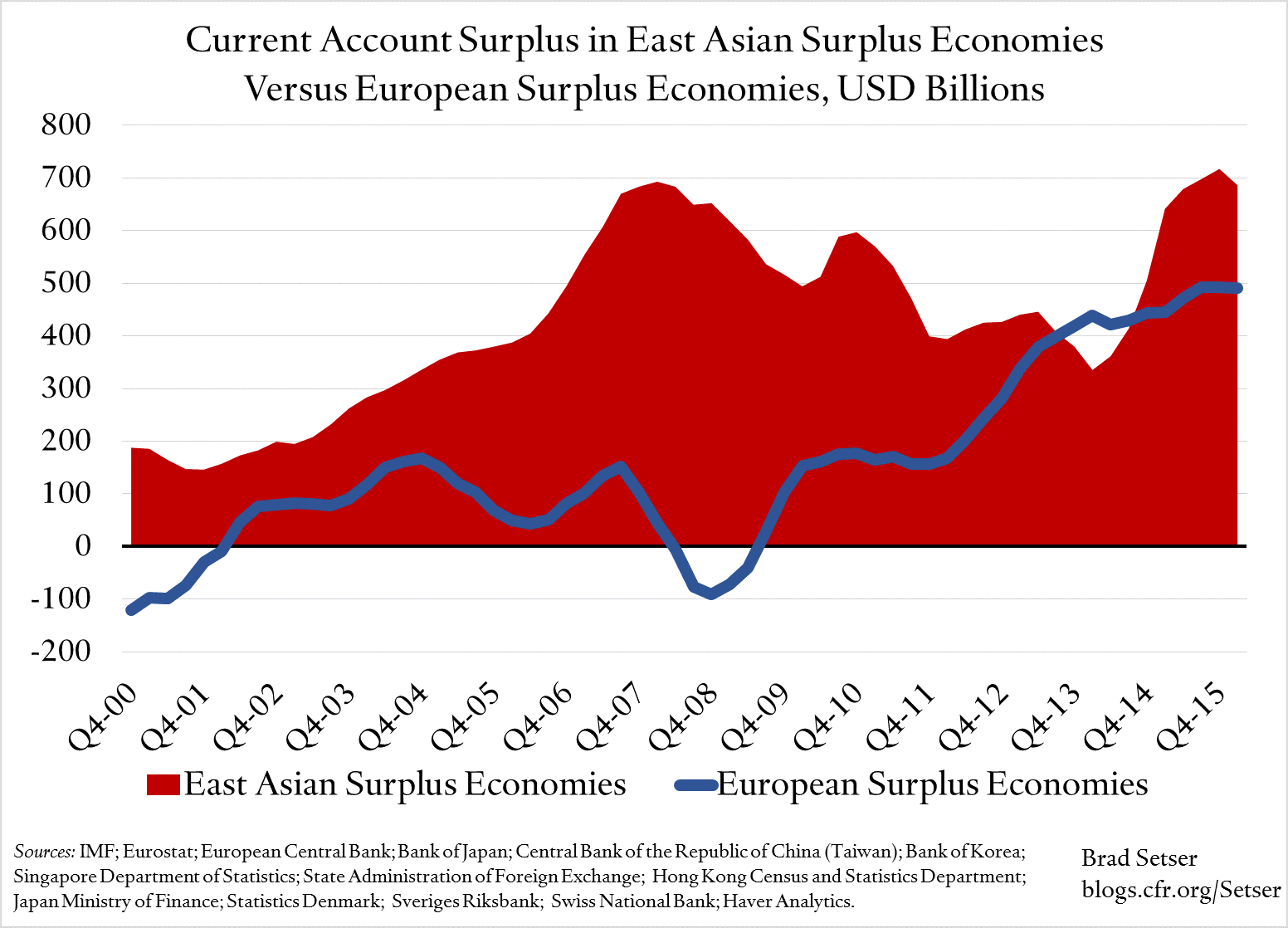 It is true that as share of the GDP of Asia’s surplus economies, Asia’s external surplus is smaller than it was before the global crisis. 4 percent of regional GDP, versus a peak of about 7 percent. After the crisis, China adopted a set of policies that put more of its unusually high level of savings to work inside China, partially offsetting rising surpluses in Korea and Taiwan. 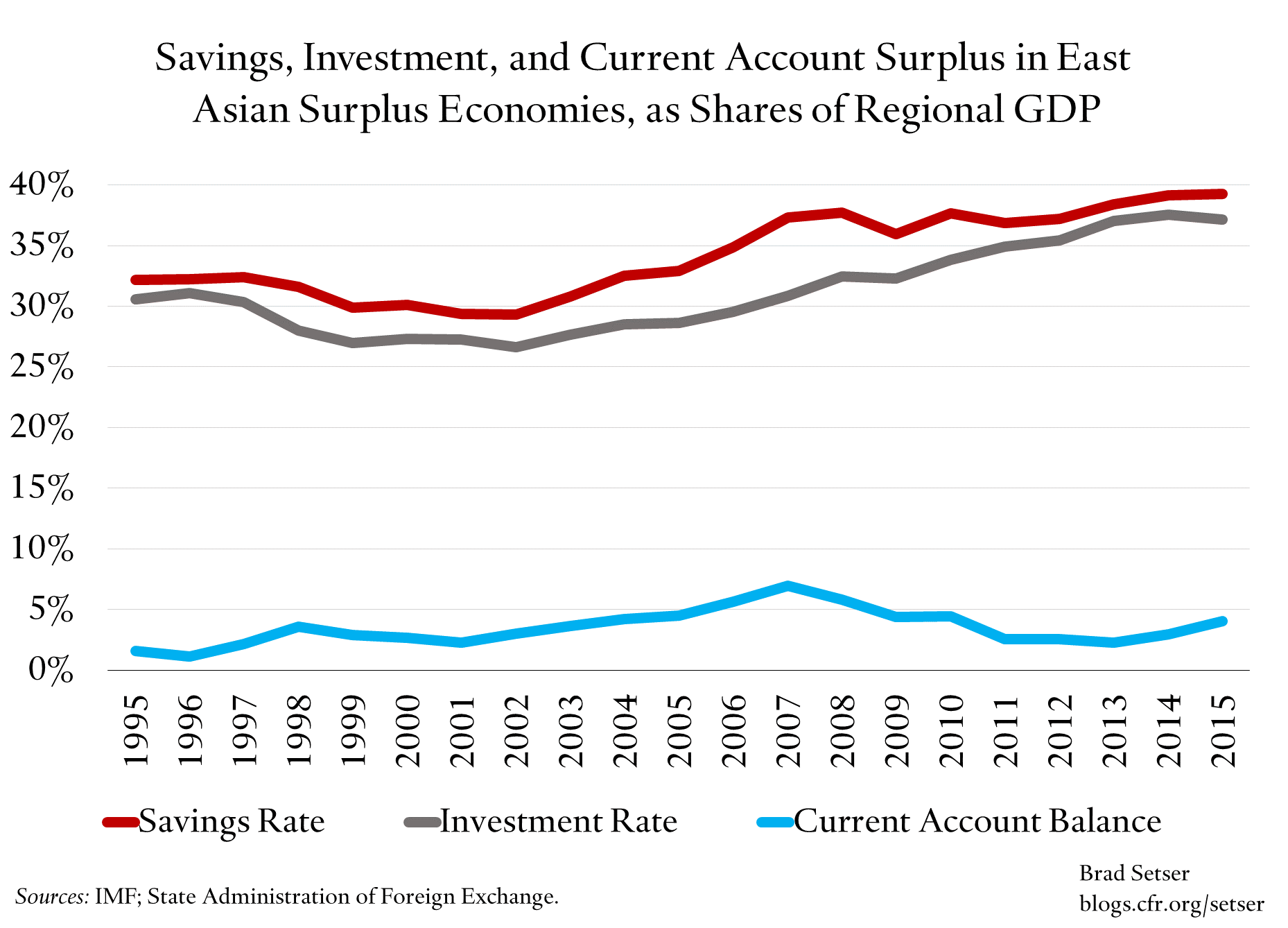 As a result, East Asia’s aggregate 2015 external surplus was only a bit smaller, relative to the GDP of its trading partners, than it was prior to the global crisis. I think that is a metric that matters for the global economy. The rest of the world is having trouble generating strong demand growth right now; sharing demand with East Asia doesn’t help. 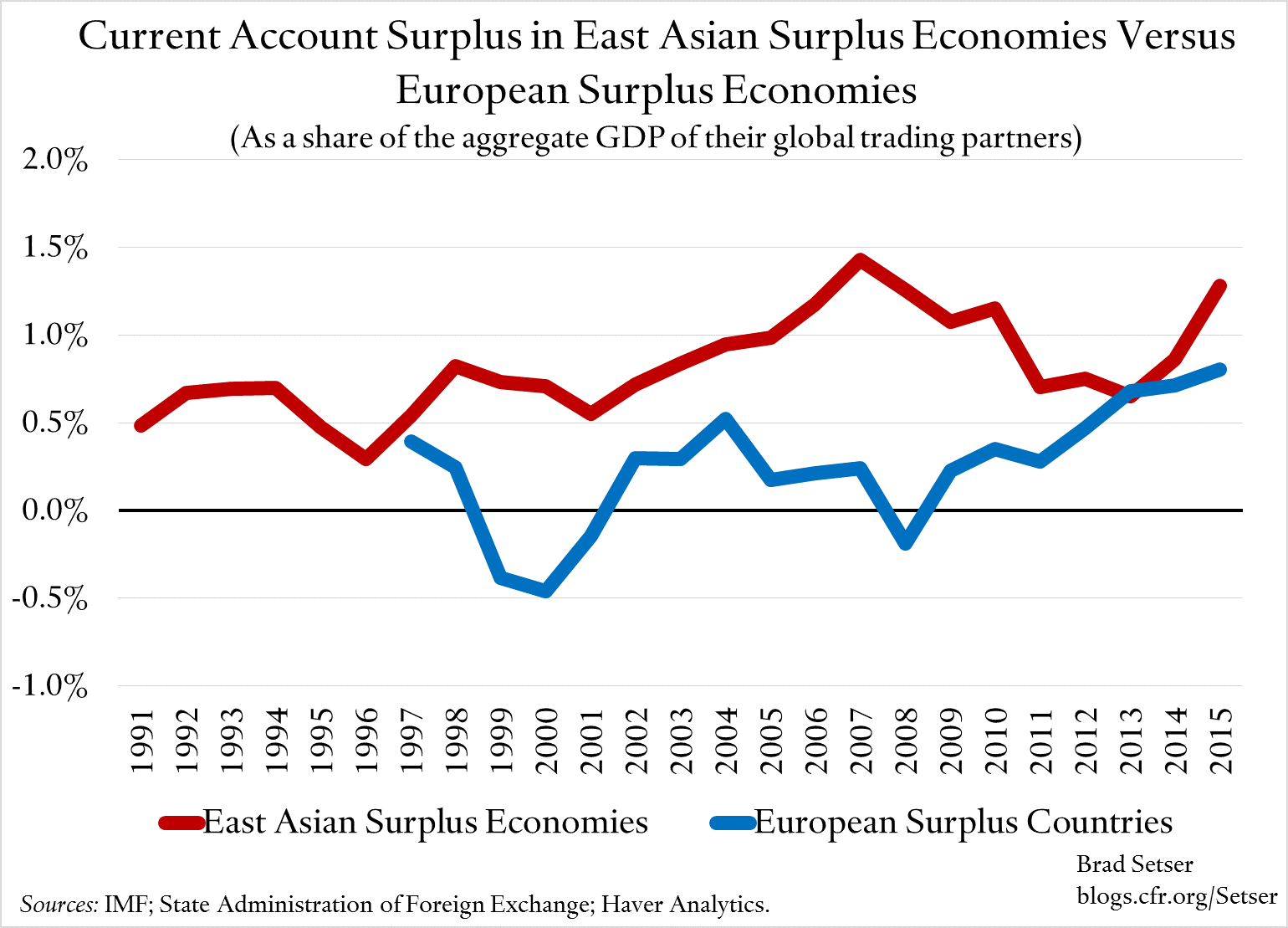 The surplus of Asia’s main surplus economies should fall a bit in 2016. China’s current account surplus is coming down a bit. Some of that is real—import demand has picked up, thanks to China’s latest credit-based stimulus. And some of it may be fake. I have my doubts that all the rise in tourism imports is real (if tourism imports disguise capital outflows, China’s underlying surplus needs to be revised up. China’s goods surplus has remained around $600 billion).

Yet without some policy shifts, there is also a risk that Asia’s savings exports (e.g. its current account surplus) could rise even higher over time.

Why? The high level of savings, and the fact that the adjustment that occurred after the global crisis has come from a rise in investment, not a fall in the underlying level of savings.

Asia’s current account has remained in surplus even with large fiscal deficits pulling down Japan’s overall national savings and even with record levels of investment in China. Fiscal deficits generally result in government dissavings in a national accounting framework; high levels of domestic investment put domestic savings to work at home and thus reduce the external surplus. Without a reduction in the underlying level of national savings, less investment in China and smaller fiscal deficits in Japan might result in an even larger Asian current account surplus, and new global risks.

The pre-crisis constellation of risks won’t repeat itself exactly, but large external surpluses can export secular stagnation, and add to the risk of contagious liquidity traps.

It cannot be continuing to juice credit to support high levels of investment in China.

It could be a set of policies that lower the level of national savings in many East Asian economies to levels that map to more sustainable levels of investment.

Notably, more public support for the provision of healthcare and basic pensions in China, Korea, and Taiwan, ideally financed through progressive income taxes rather than higher social contributions.