Skip to main content
Chicken Feet And China: Back to the Future

Yes, this is a blog about chicken feet exports—technically, NAICS code 311615, "poultry processing."

Welcome to the glamorous world of tit-for-tat trade spats. The biggest trade case of 2009 was the tires "421 safeguards" case, which prompted China to respond with duties on U.S. exports of chicken parts.

The possibility that the U.S. and China could embark on a cycle of sanction and counter-sanction will, I expect, force a new group of people to explore the nooks and crannies hiding in the data on U.S. exports to China.

Some of the sectors are well known.

Aircraft, of course. They are one of several sectors that account for about 10 percent of total U.S. exports to China and Hong Kong. Along with autos. Auto exports fell a bit in 2015, but in 2014 auto exports were almost as big as aircraft exports. Mostly SUVs I think, with many coming from the German transplants. In numeric terms, the legacy of the United States once powerful electronics manufacturing sector matters—though there hasn’t been much growth, alas, since the crisis.

Hopefully everyone now knows about the bling—gold and jewelry are about a third of U.S. exports to Hong Kong (and have at times been as much as ten percent of combined exports to China and Hong Kong).

U.S. chicken part exports to China are mostly feet, from what I understand. A clear case of the gains from trade that emerge from different culinary preferences.

The tires part of the tires for chicken feet case is often cited as an example of how protection doesn’t work. China retaliated, and the U.S. ended up importing more tires from South Korea (though that might have happened no matter what, given the large won depreciation in 2008), Taiwan, and Indonesia. Don Lee of the LA Times:

"In September 2009, Obama, in response to a union complaint, approved safeguard tariffs of 25% to 35% on imported Chinese car and light-truck tires for three years. It seemed to work at first blush. Total Chinese imports of new radial tires for cars dropped 28% in 2010 from the prior year, to $899 million. But other trading partners rushed to fill the void. Shipments from South Korea, Thailand and Indonesia doubled in value, more than offsetting the decline in Chinese-made tires." 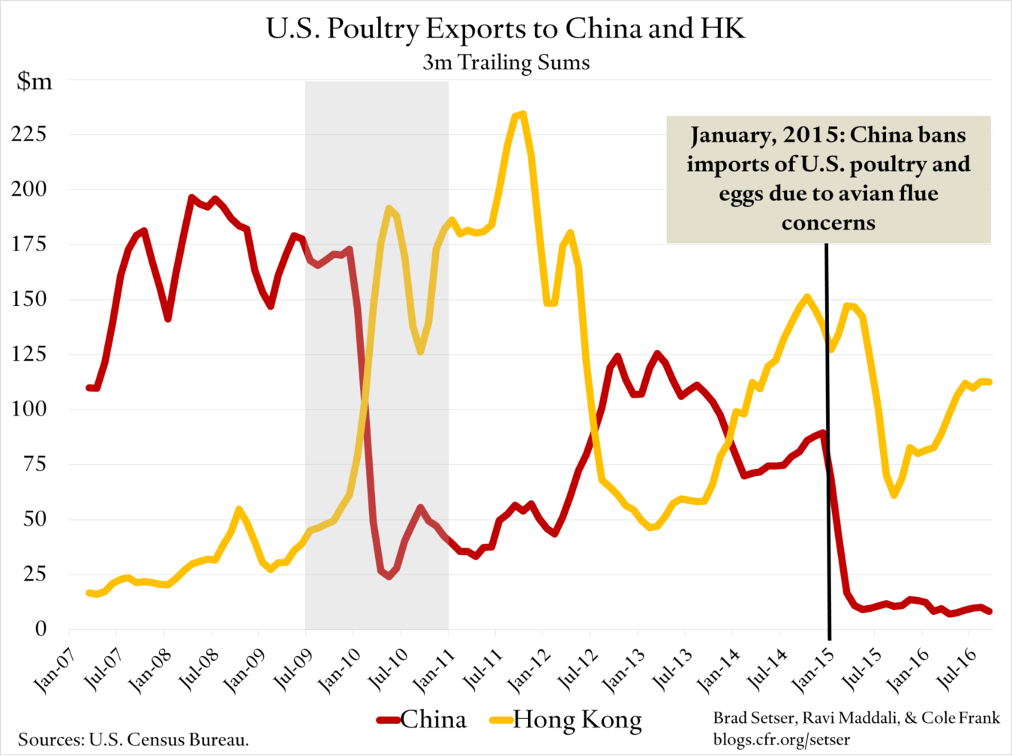 (The sharp decline in poultry exports around January 2015 reflects China’s ban of poultry imports from the U.S. over avian flu concerns, though China has also reimposed tariffs on chicken parts at various times, generating an ongoing dispute at the WTO.)

Cole Frank, Ravi Maddali, and I also deflated meat and edible meat offal exports (HS code "02") by the corresponding price index to get a “real” exports number. There is no real sign China’s tariffs had any significant impact on overall U.S. exports. China “lost” more than the U.S. did in a very narrow sense, as the U.S. tire tariffs at least diverted trade away from China. 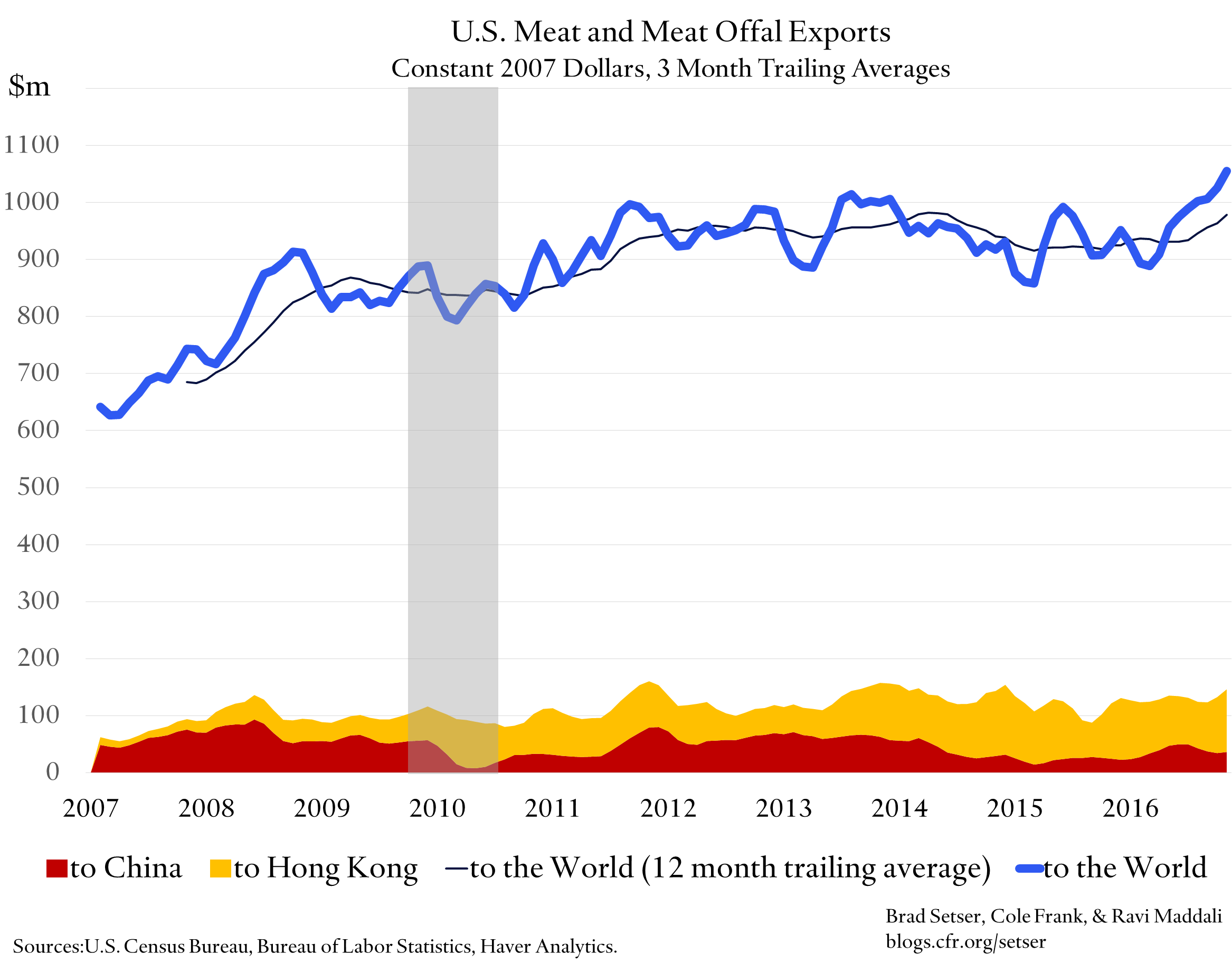 This is mostly just a fun story. China has a reputation as an effective trade counter-puncher, so it is interesting to find a case where it seems like China did not land much of a punch.

I suspect even China faces more problems identifying good targets for trade retaliation than is commonly thought. It isn’t just that Hong Kong can provide an alternative port of entry. A decent chunk of U.S. exports to China are globally traded commodities, which aren’t conventionally thought to be the most effective targets for retaliation.* If China stops buying U.S. soybeans and wants to still eat more poultry and pork, it will need to buy ‘beans from Brazil and Argentina. Or oil seeds (rapeseed) from Europe. Both would open up new markets for U.S. soybeans.

Even so, there is no doubt that China does have the ability to retaliate; its reputation is mostly well-earned. The U.S. government -- tweets aside -- doesn’t have as many tools at its disposal as China does to tilt its domestic playing field toward domestic domestic production, and faces more legal constraints. Consistently "winning" tit-for-tat trade exchanges with China will be hard.

And mathematically it will take a lot of small sectoral cases—tires, chicken feet, and the like—to make a material impact on the overall trade balance. Chicken feet are a $1 billion ballpark U.S. export sector. Tires at the time generated $2 billion in imports. The net impact of the sanctions in both sectors was in the millions of dollars. The bilateral deficit is close to $350 billion dollars.

Trade cases certainly could be used as leverage to encourage broader changes in Chinese policy, not just to address sector-specific grievances. At the same time, in my view, the impact of trade cases tends to be overwhelmed by the impact of exchange rate changes—and the other macroeconomic drivers of imbalances.

* Hitting autos would hit Germany as well as the United States. And on aircraft, well, China can clearly reduce its purchases of Boeings. But it if it decides not to buy from Boeing at all, it loses leverage with Airbus—leverage that it hopes to use to build out its domestic aviation industry.

** We looked at tires too. Extending the full Peterson Institute analysis through 2016 might be interesting. On first glance the most recent round of counter-vailing duties on Chinese tires seems to have had more of an effect than the 421 safeguards. 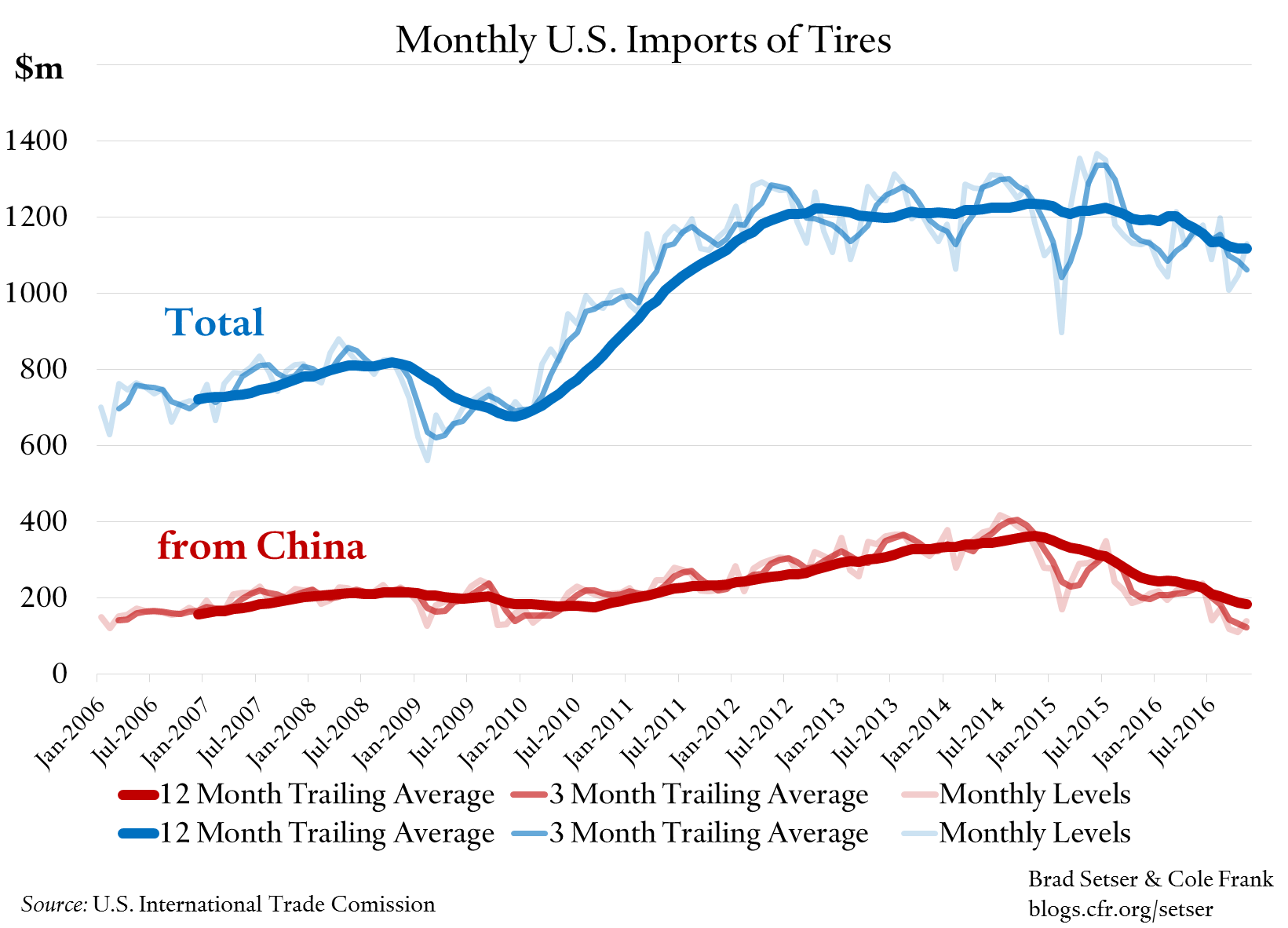