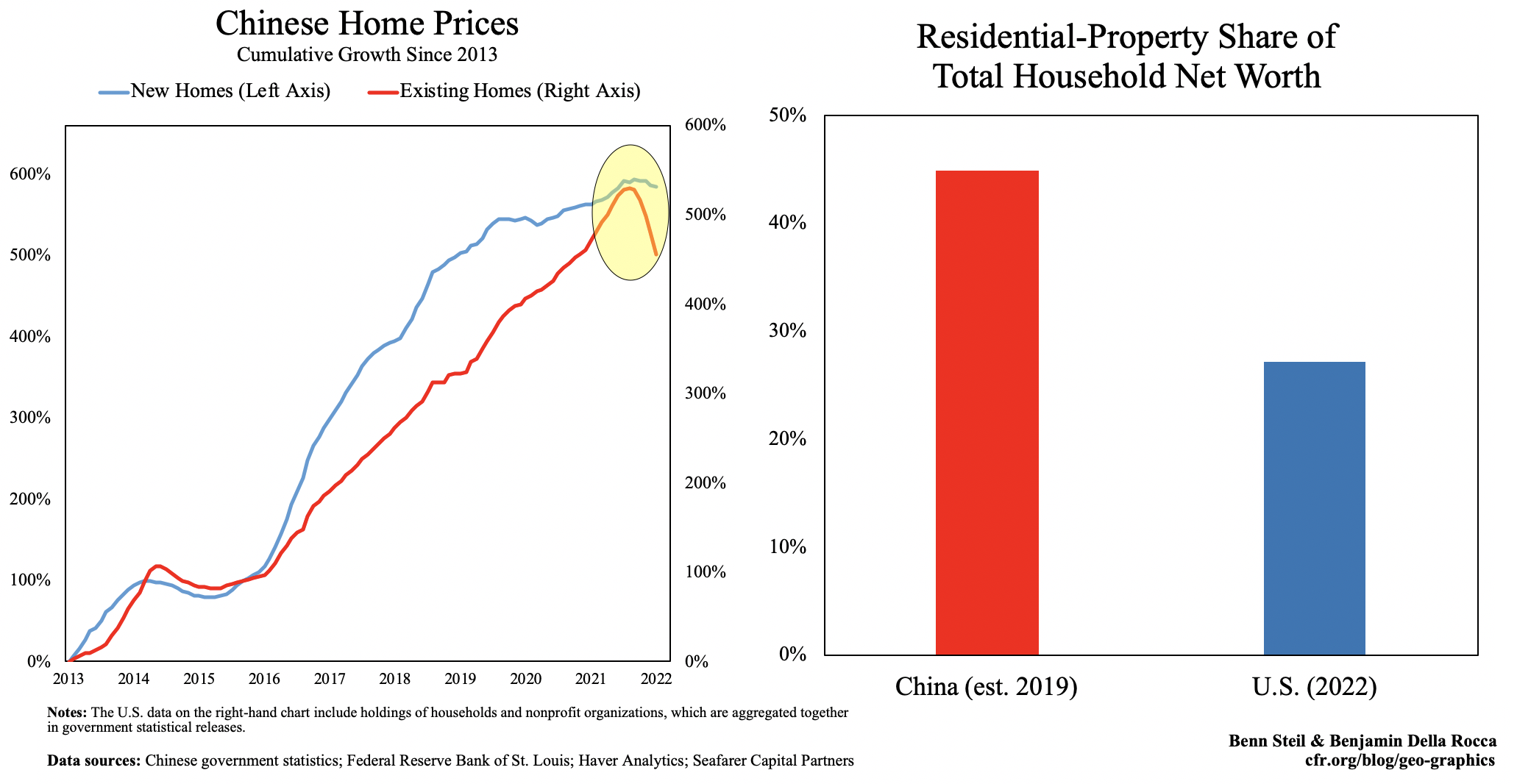 The state-controlled press says it is all working perfectly—speculation is being stamped out, and the housing market is “stable.” Yet home sales are plunging.

So how does the government square this circle? It points to data showing steady prices for new homes. Our left-hand graphic above confirms this fact. But it also shows a steep decline—the steepest on record—in prices for existing homes.

What is happening? The government cares less about prices of existing homes than new-home prices, since over-leveraged developers make their money selling new units. So, not surprisingly, it is betting the house on keeping new homes popular and profitable.

Chinese cities have been imposing price floors and prohibiting “malicious price cuts” on new construction. They have been offering generous consumer-goods vouchers and tax cuts to buyers of new properties. All of this costly window-dressing is keeping new-home prices up and overleveraged developers afloat, even as the market for existing homes tanks. Still, real-estate analysts and Chinese developers alike widely expect new-home prices to head south soon enough.

Falling house prices affect GDP through the so-called wealth effect—that is, consumers’ tendency to cut spending when their assets fall in value. A $100 decline in housing-market net worth, according to one U.S.-based study, lowers consumption by $2.50-5.00. In China, the housing wealth effect is likely at least this large. As the right-hand chart above shows, homes represent roughly 45 percent of Chinese household net worth. (In some cities, it is more like 70 percent.) That compares with just 27 percent in the United States.

What does all this mean for China’s economy? If existing-home price declines bring a wealth effect at the upper end of the range above, then we would expect recent changes alone to shave roughly half a percent off China’s 2022 GDP growth. Last month, owing to omicron’s spread, the IMF revised China’s 2022 growth forecast down to 4.4 percent, 1.1 percentage points below the government’s target, although home-price effects do not seem to be part of their equation. All else equal, something below 4 percent is more likely. Of course, President Xi may be unwilling to accept 4 percent growth—in which case we can expect yet further measures to juice borrowing and home prices.

Eventually, unsustainable debt becomes—well, unsustainable. At that point, there is a financial crisis or productivity collapse that crushes growth. Defining “eventually,” of course, is the big challenge.