Agencies, yes. But not Treasuries.

Keith Bradsher of the New York Times, citing Ben Simpfendorfer of RBS, argues that China’s government is likely to reduce its purchases of US debt.

“All the key drivers of China’s Treasury purchases are disappearing — there’s a waning appetite for dollars and a waning appetite for Treasuries, and that complicates the outlook for interest rates,” said Ben Simpfendorfer, an economist in the Hong Kong office of the Royal Bank of Scotland.

In some sense China’s purchases of US debt has to fall from its current level, as the current level of purchases is unsustainable in a context where China’s reserve growth seems to have slowed. The TIC data show a $44.4b increase in China’s US holdings in September and a $67.5b increase in October, with nearly all the increase coming from the rise in China’s short-term Treasury holdings.

That said, the available data from US suggest that China has yet to lose its appetite for either dollars or Treasuries, despite all the talk coming out of China.

We don’t have data for November or December, so the available US data points are by now a bit stale. But China’s $67.9b of purchases of Treasuries in October were exceptionally high ($43.5b in September isn’t shabby either). That level of Treasury purchases suggests, if anything, that China was shifting funds into dollars, as China’s recorded US purchases almost certainly exceeded China’s October reserve growth. I suspect that China wasn’t shifting into the dollar so much as holding more dollars in ways that register in the US data, so I would discount this data point a bit. Still, the raw October data doesn’t indicate a shift away from either the dollar or Treasuries. Rather the opposite.

Over the last 12 months, China’s recorded US Treasury purchases have topped $190 billion -- a record. Most of the rise has come in the past few months of data. The US survey of foreign portfolio investment has tended to revise China’s purchases of Treasuries up, so $190 billion should be considered a minimum. 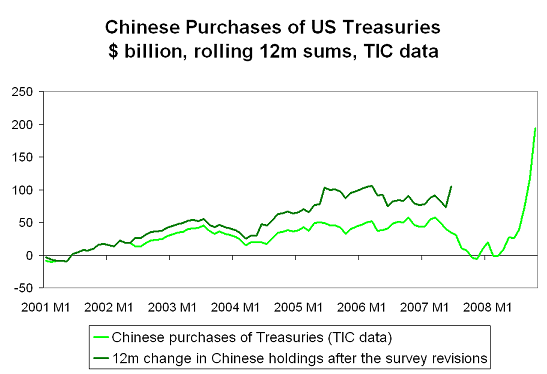 The TIC data for November and December isn’t available. But I suspect that the $136b increase in Fed’s custodial holdings of Treasuries over the last two months provides some clues about the evolution of China’s portfolio. Central bank holdings of Treasuries at the Federal Reserve Bank of New York continue to rise rapidly. As of now, I would argue the available evidence suggests that China’s appetite for Treasuries has increased in q4 -- largely because of a fall in its appetite for Agencies. Let’s see what the November and December TIC data show.

Looking ahead, China’s official purchases of Treasuries will be function of three things:

1) The pace of China’s reserve growth. That will be determined by the evolution of China’s trade surplus, FDI flows and hot money flows. The World Bank expects China’s current account surplus to rise in dollar terms in 2009; I tend to agree. Oil will not average close to $100 a barrel in 09. The fall in commodity import prices will help to offset a (probably large) fall in exports. The fall in exports implies fewer imported components, and China’s domestic slowdown implies fewer imports too. But FDI inflows will slow and hot money flows clearly have reversed, so overall reserve growth (counting the increase in China’s hidden reserves) should slow.

2) The share of China’s reserves that are held in dollars. That is currently close to 70% best I can tell. I have no idea if China will want to continue to maintain that dollar share even as the US runs huge fiscal deficits. But now that China is pegging tightly to the dollar, I would guess that Europe would put a lot of pressure on China not to sell dollars for euros in a way that drives up the euro. That would be tantamount to driving the RMB down v the euro to support China’s exports to Europe. I consequently don’t expect a big change in the dollar share, but that is a huge assumption.

3) The share of China’s dollar reserves that are invested in Treasuries. That share is currently rising, big time. At some point though China will have brought its Agency portfolio down to an acceptable level and start to worry about the size of its Treasury holdings. So I wouldn’t expect it to rise forever.

Sum it all up and the pace of China’s Treasury purchases should fall from their recent monthly highs in 2009. But that is only because they currently are at such a high level. Even SAFE cannot sustain a close to $70b a month pace of Treasury purchases for all that long. Not unless it really plans to run its Agency portfolio down to zero.

One last point: Hot money has to go somewhere and hot money outflows from China could go into the dollar. If Chinese reserve growth is below China’s 2009 current account surplus, private Chinese investors will be building up their foreign assets. China’s government won’t necessarily be the only Chinese buyer of dollars. Or, for that matter, euros.

Central banks aren’t always a stabilizing presence in the market

Democracy Is Down, but Not Out