China’s stated policy goal is to rebalance away from both investment and exports.

That is not all that easy to do.

After the crisis, China rebalanced away from exports (exports fell significantly as a share of China’s GDP, and China’s manufacturing trade surplus also fell relative to China’s GDP) mostly by juicing up investment (investment rose from around 45 percent of GDP to 50 percent of GDP; see Figure 19 of this Goldman Investment Strategy report, among other sources).

Downsizing investment typically means slower growth, and more of a temptation to look to exports for growth.

No matter. Over the past few years, China does seem to have become less reliant on exports for growth. Since 2012, exports of manufactured goods (*) have fallen from 23 to 19 percent of China’s GDP.

The explanation for the ongoing surplus is straight forward: China’s imports of manufactures have also been moving down. 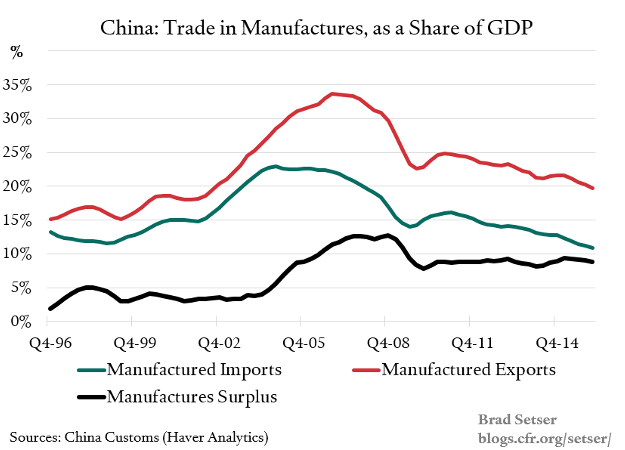 For China, more than most countries, it makes sense to break manufactured imports down further, and divide them into processing imports (processing is the data category for imported components for reexport—the famous Asian supply chain) and imports for China’s own use. I think the last category is important—but to be clear, it is a derived category, you will not find it reported on its own.

The disaggregated story is in its own way more interesting. 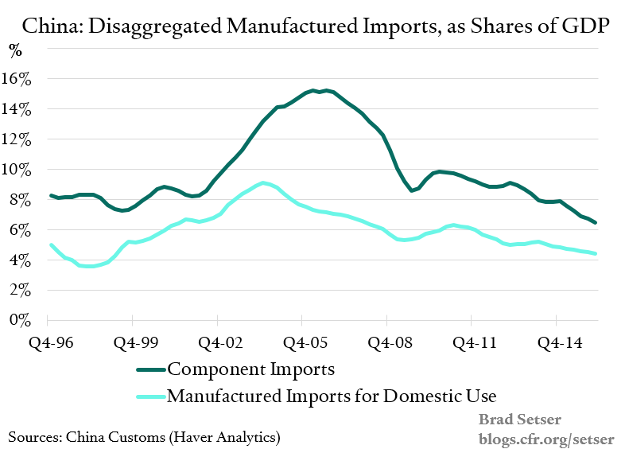 And imports of manufactures for domestic use also appear to have been on a downward trend relative to China’s GDP since around 2003.

With all the focus on trade globally and in the United States, it is worth highlighting that China’s manufacturing exports, largely to meet global final demand, are around 15 percent of China’s GDP after netting out imported components, while manufactured imports to meet Chinese domestic demand appear to be in the range of around 5 percent of China’s GDP. 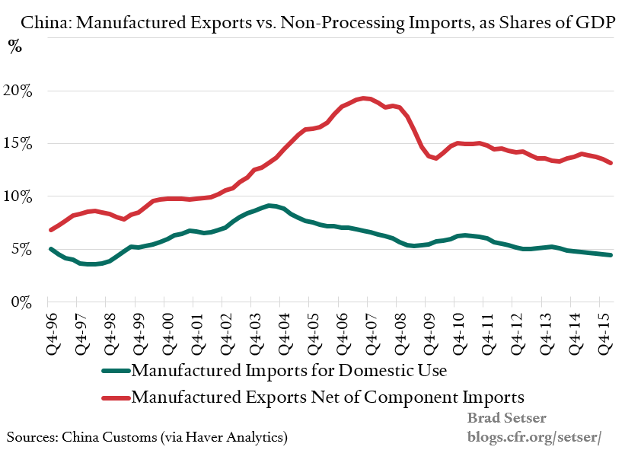 A gap here, to be clear, is natural. China has to export manufactures to import commodities, and thus will typically run a surplus in manufactures. But the gap between manufactured exports and manufactured imports has been quite big for some time, and it is part of the “China shock” to world trade over the last ten years.

Bottom line: China’s recent pattern of import substitution—of components for the export sector most obviously, but across manufacturing more broadly—deserves a bit more attention than it has received to date.

(*) China doesn’t report this number directly, but the difference between China’s total exports and its exports of primary products (commodities) provides a reasonable proxy, just as the difference between China’s total imports and its imports of primary products provides a reasonable proxy for manufactured imports.

The Case for More Public Investment in Germany is Strong