Martin Wolf’s important column does a wonderful job of illustrating the basic risk China poses to the world: at some point China’s savers could lose confidence in China’s increasingly wild financial system. The resulting outflow of private funds would push China's exchange rate down, and rise to a big current account surplus—even if the vector moving China’s savings onto global markets wasn’t China’s state. History rhymes rather than repeating.

And I agree with Martin Wolf’s argument that so long as China saves far too much to invest productively at home, it basically is always struggling with a trade-off between accepting high levels of credit and the resulting inefficiencies at home, or exporting its spare savings to the world. I never have thought that China naturally would rebalance away from both exports and investment. After 2008, it rebalanced away from exports—but toward investment. There always was a risk that could go in reverse too.

In one small way, though, I am more optimistic than Martin Wolf.

I suspect that China’s regime was under less outflow pressure in 2016 than implied by the (large) fall in reserves, and thus there is more scope for a combination of “credit and controls” (Wolf: "The Chinese authorities are in a trap: either halt credit growth, let investment shrink and generate a recession at home, a huge trade surplus (or both); or keep credit and investment growing, but tighten controls on capital outflows") to buy China a bit of time. Time it needs to use on reforms to bring down China’s high savings rate.

All close observers of China know that China has been selling large quantities of reserves over the last 6 or so quarters. The balance of payments data shows a roughly $450 billion loss of reserves in 2016, with significant pressure in q1, q3, and q4. The annualized pace of reserve loss for those three quarters was over $600 billion (q2 was quite calm by contrast).

But close examination of the balance of payments indicates that Chinese state actors and other heavily regulated institutions were building up assets abroad even as the PBOC was selling its reserves. In other words, a lot of foreign assets moved from one part of China’s state to another, without ever leaving the state sector.

For a some time I have tracked the balance of payments categories dominated by China’s state—and, not coincidentally, categories that experienced rapid growth back in the days when China was trying to hide the true scale of its intervention. One category maps to the foreign assets the state banks hold as part of their regulatory reserve requirement on their deposit base. Another captures the build up of portfolio assets (foreign stocks and bonds) abroad, as most Chinese purchases of foreign debt and equity historically has stemmed from state institutions (the state banks, the CIC, the national pension fund). Even if that isn't totally true now, portfolio outflow continues to take place through pipes the government controls and regulates.

These “shadow reserves” rose by over $170 billion in 2016, according to the balance of payments data. The state banks rebuild their foreign currency reserves after depleting them in 2015, and there were large Chinese purchases of both foreign equities and foreign debt.

And the overseas loans of Chinese state banks—an outflow that I suspect China could control if it wanted to—rose by $110 billion. 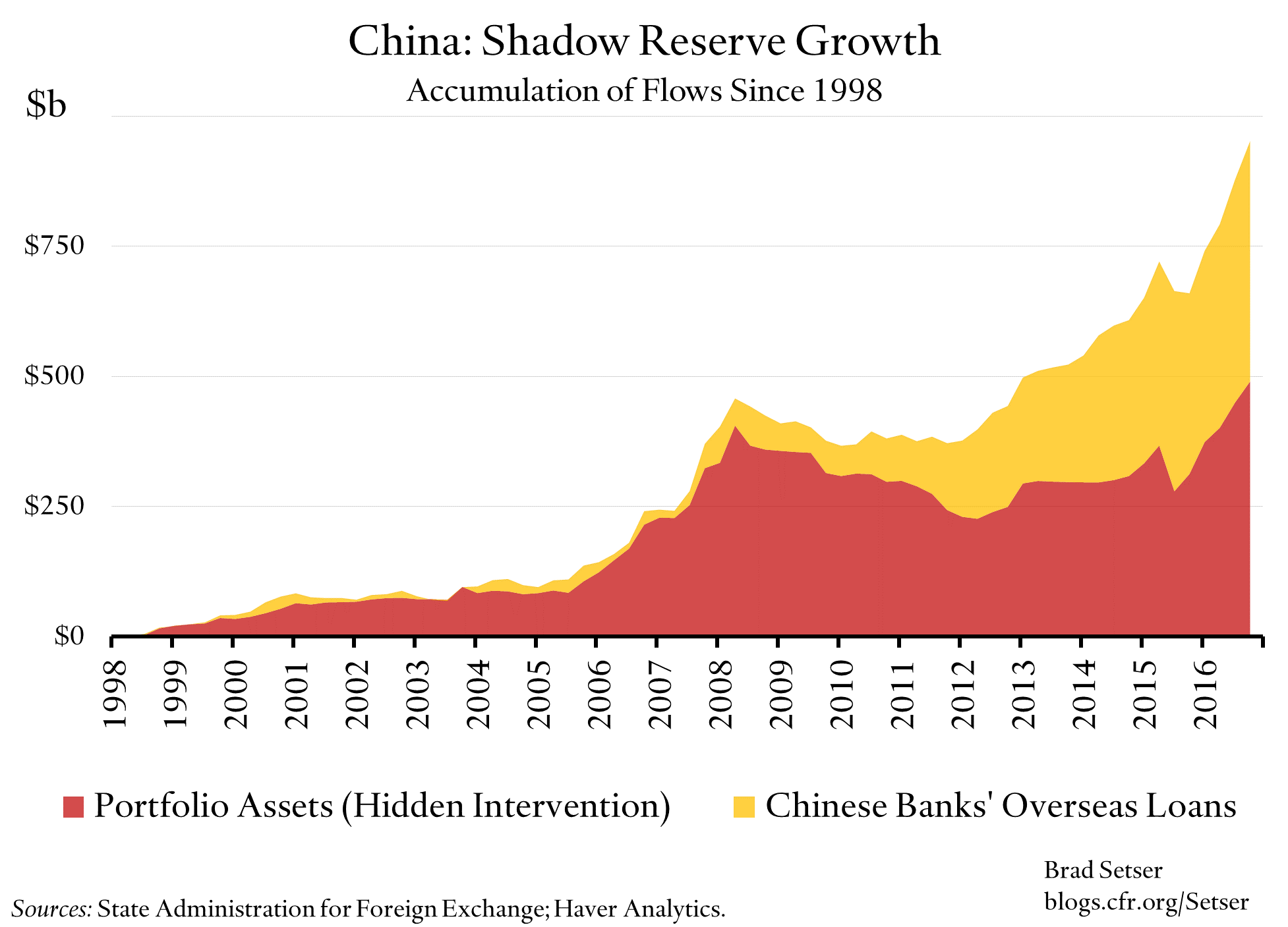 As a result much of the foreign exchange that the central bank sold ended up in the hands of other state actors. My broadest measure of true official outflows* shows only $150 billion in net official sales of foreign assets in 2016. 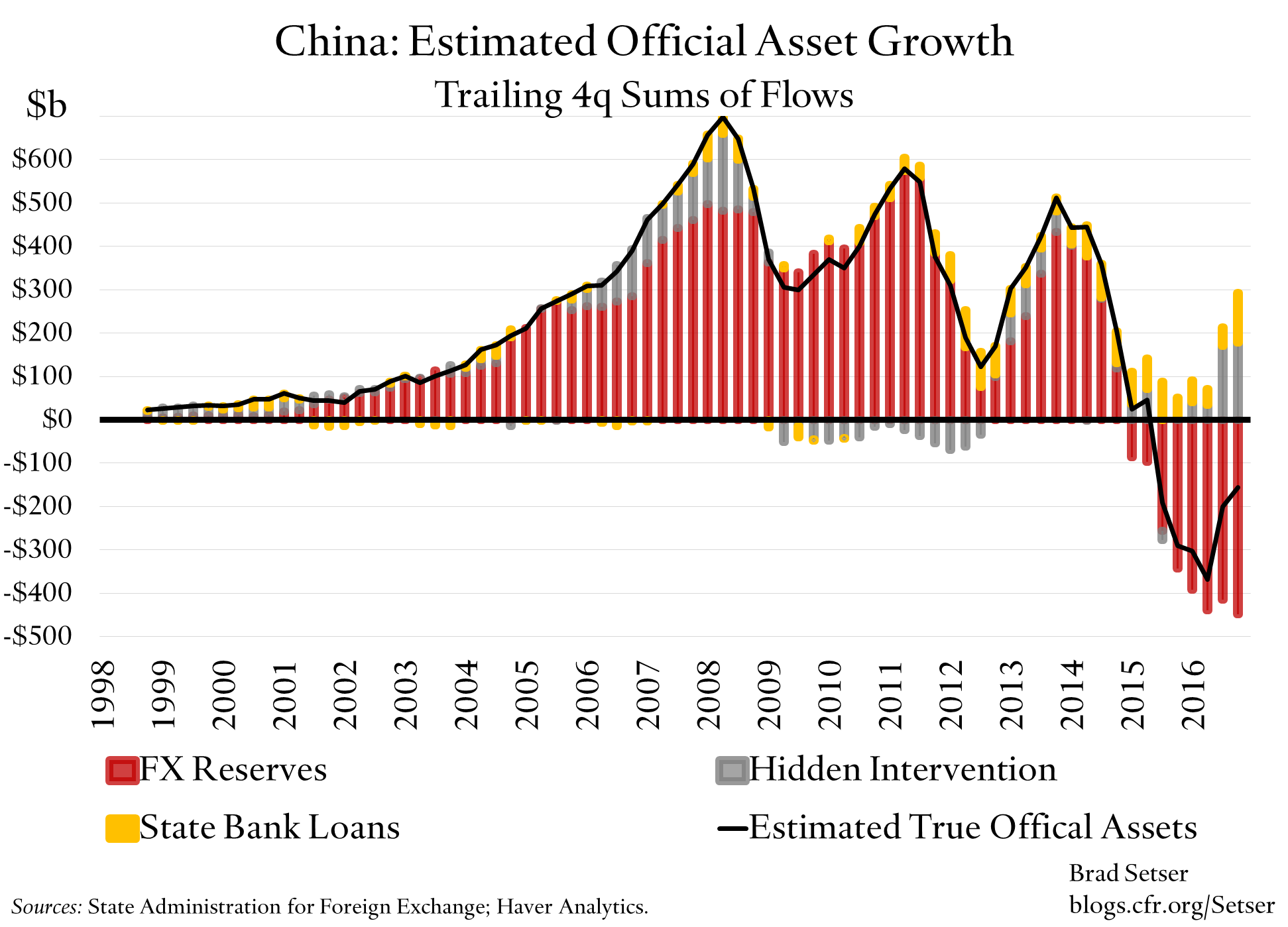 Not a small sum to be sure. But not an unmanageable sum. That kind of outflow can easily be financed out of China’s large foreign exchange reserves for a time, or China could more or less bring the financial account into balance by limiting the buildup of foreign assets by the state banks and simultaneously cracking down on outward FDI (over $200 billion in outflows 2016, and largely from state and state-connected companies).

In other words, much of the reserve draw was offset by the buildup of other state assets—especially counting the assets state banks and state firms acquired abroad.**

There are of course still private outflows. But the outflows aren’t that much bigger than what China could finance out of its export surplus. If you take the growth in the state banks' overseas assets ("other, other assets" and "other, loans, assets" for the BoP geeks) out of the data, it seems that the pace of outflows actually slowed a bit in 2016. 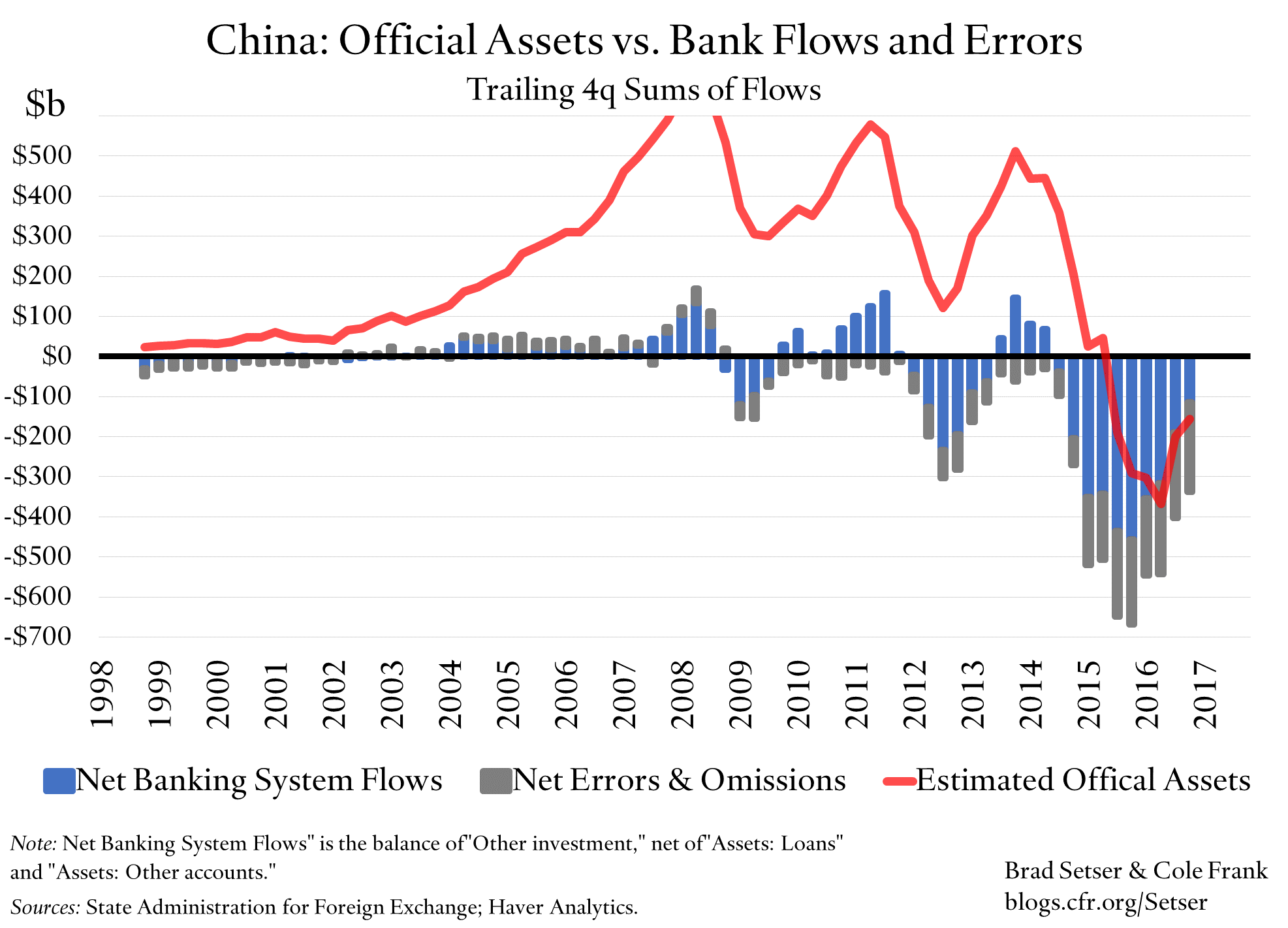 Of course, I do not like simple stories. I think the outflow numbers on the financial account are a bit less scary after you adjust for the financial activity of China's state, but I also think the current account may disguise some real private outflows.

Bottom line: the 2016 reserve drain was offset in part by the buildup of assets at the state banks and in other large regulated financial institutions, so it is a bit less scary than it seems—for now. Especially in a context where China’s growth is accelerating, China is on a tightening cycle and, for now, the dollar isn't appreciating in the way many expected.

* This measure includes the foreign loans of China's banks (assuming, correctly, that all the major lenders are state-owned), the traces the PBOC's other foreign assets leave in the balance of payments data (other, other, asset -- which reflects the foreign assets the banks hold as part of their regulatory reserve requirement on domestic deposits) and portfolio equity and debt. Historically, the CIC has dominated portfolio equity outflows and the state banks accounted for most portfolio debt outflows. That is a bit less true now, so this arguably over-counts. If that is the case, I would welcome a revision to the Chinese balance-of-payments data that splits out China's holdings of portfolio assets abroad by sector -- consistent with the reporting provided by many other countries. One thing though is clear: portfolio outflows are governed by quotas and are executed through channels the state regulates. They cannot happen without state approval.

** This would explain in part why the data on fx settlement, which includes the state banks as well as the PBOC, shows fewer sales than implied by the change in the PBOC's foreign balance sheet.