Should I declare victory and go home? I always have thought a fast-growing, high investment emerging economy should run a current account deficit, not a surplus—

Not yet, I would say.

It is always dangerous to try to assess China’s trade and balance of payments data for the first quarter, and even more so to opine on the basis of numbers from the first two months. China’s q4 to q1 seasonality is vicious, and the data distortions from the lunar new year are real.

But the numbers out now point to some big swings—swings that are worth highlighting. And some real puzzles. I would love to paint a simple picture. But I do not think there is one. The level of chaos in the balance of payments data that the combination of data revisions and real changes seem to have produced is in fact impressive.

In the fourth quarter of 2016, China trade surplus in goods—measured goods, trackable goods—was about $500 billion (annualized). A bit less if you trust the seasonal adjustments. That is a bit off from its peak level of around $600 billion, but still pretty large. The goods surplus incidentally is the easiest to verify in the counter-party data. It generally isn’t off by that much.

In the fourth quarter of 2016, China’s current account surplus—the surplus on trade in goods and services (e.g. tourism) net of the balance on interest and dividends from cross border investment—was roughly $50 billion (annualized; the non-annualized surplus in q4 was about $12 billion). That is down from $250-$300 billion in the first part of 2016. The q4 gap between China’s goods balance and its current account was absolutely massive—over $400 billion, annualized. 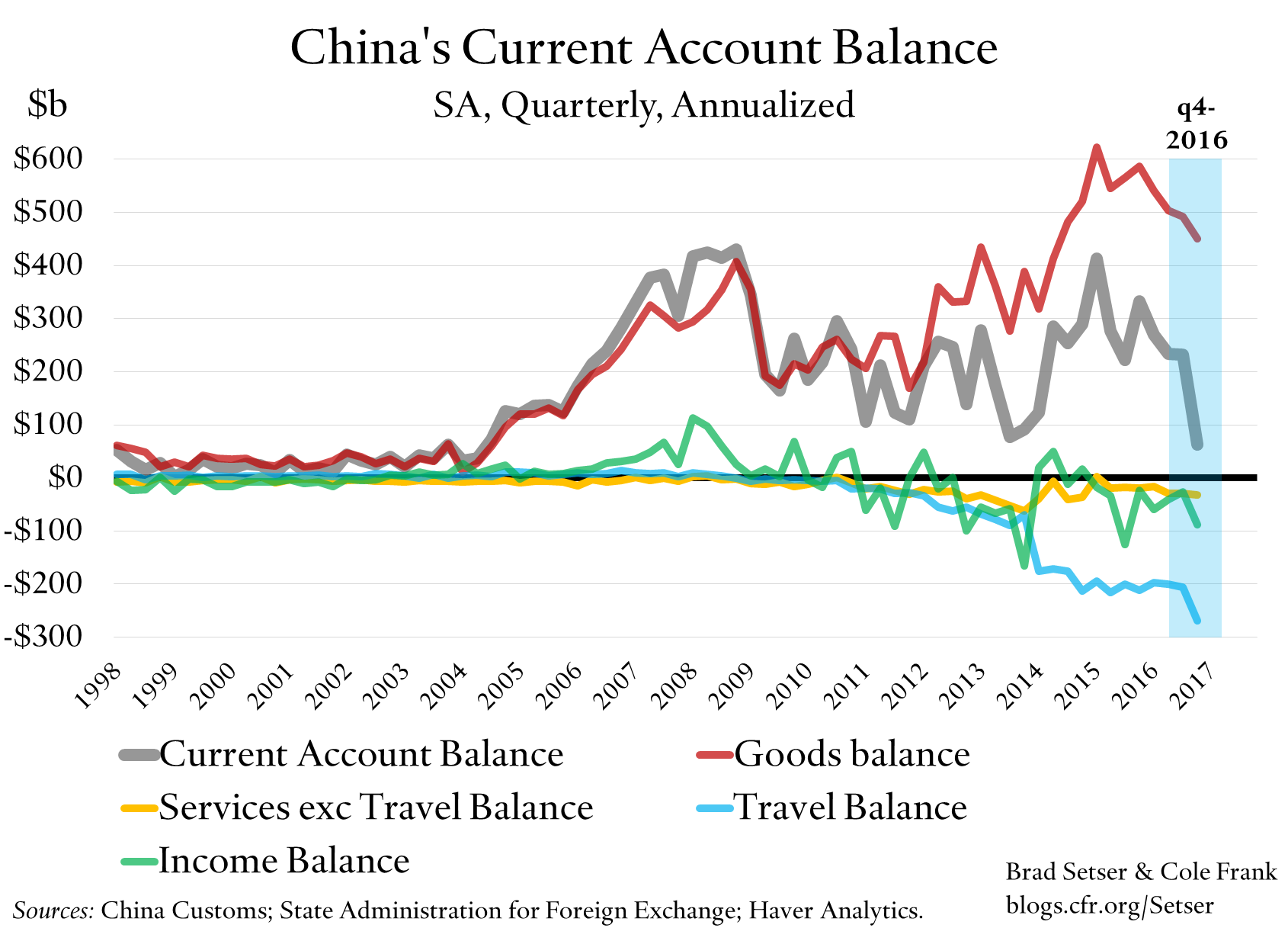 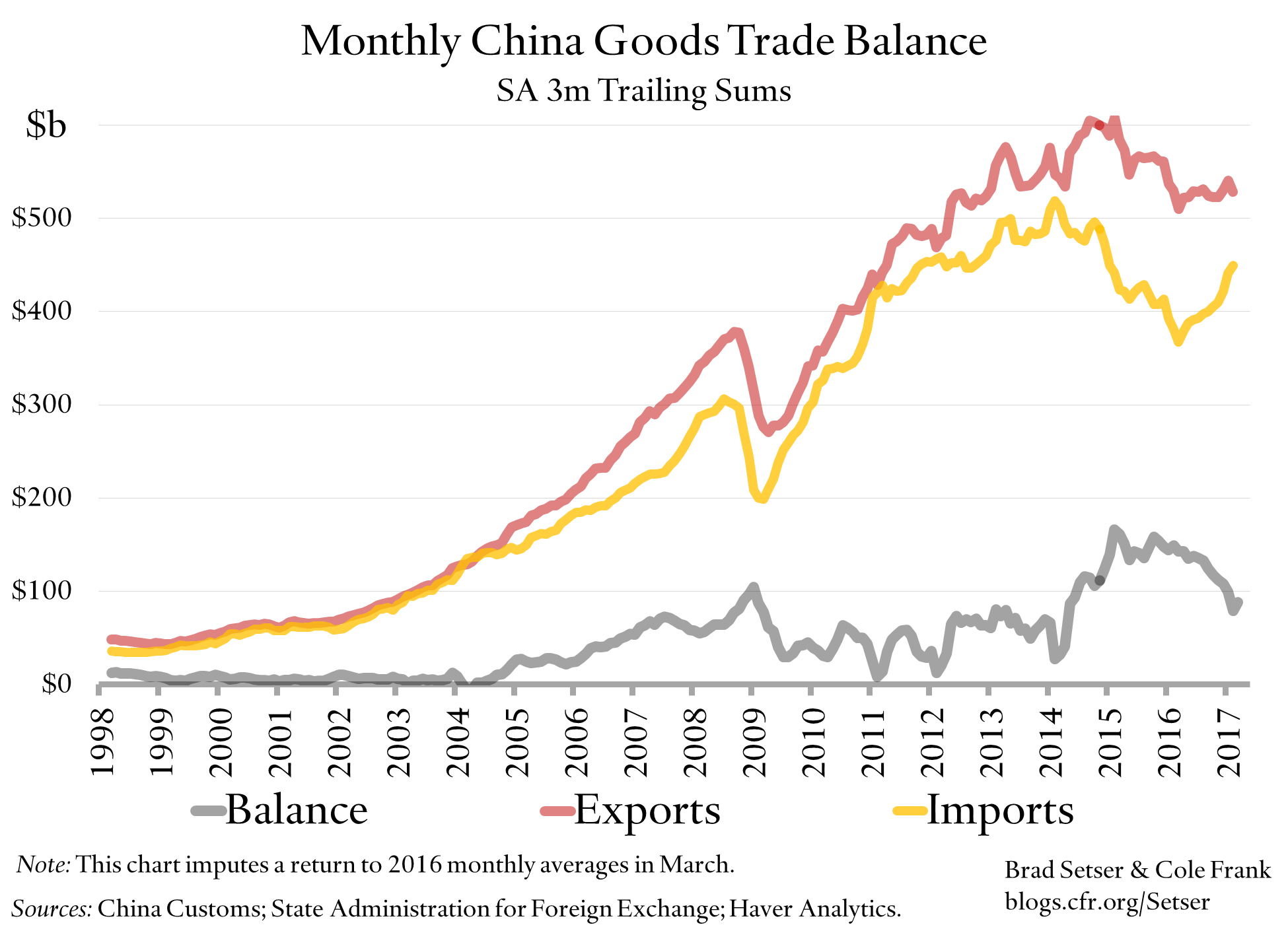 And much of this appears to be “real”—not a simple function of changes in iron and oil prices. The average year-over-year increase in import volumes for January and February in the official Chinese data is close to 20 percent (gulp). Of course, these numbers need to be interpreted with appropriate caution: the lunar new year always distorts the numbers in some ways (though combining the January and February data in principle should smooth out the impact) and the March numbers could radically change the picture.

Broadly speaking outflow pressure looks to have gone way down (see the IIF chart) even as China’s trade surplus has apparently shrunk (or even almost disappeared, after counting services). That of course can happen if a strong expansion pulls in funding from abroad (or in China’s case, convinces Chinese firms who held dollars abroad to profit from an expected depreciation to bring those funds back home).

What the heck is really going on?

My best guess: revisions to China's method for collecting data on the non-goods balance and real changes in the goods balance combined to produce what appears to be a major swing.

I suspect a portion of the fall in the current account in q4 was a result of disguised outflows—not a real change (a portion is also real: there is a reason why emerging economies have rallied…and it isn’t all a function of bets on Trump’s true trade policy).

And it does seem like there was a jump in Chinese imports in q1—the rise wasn’t simply due to higher oil prices (oil averaged just over $30 in q1 of 2016, so higher prices for oil and all oil derivatives—petrochemicals for example—are influencing all year-over-year comparisons).

But I want to see more data before I draw any strong conclusions—January and February really need to be joined with March to get a better picture of the overall trend. 20 percent year-over-year growth in import volumes seems a bit too high to be sustained, even for a booming China.

These arguments aren’t very "Zero Hedge-y". And they sort of go in offsetting directions. Many are informed by a sense that China’s current account surplus hasn’t really gone from $250 billion to $0-$50 billion in a couple of quarters, even if it likely has gone down. A $200 billion current account swing should be big enough to have some really significant effects globally. I see some knock-on effects (the emerging market rally for example), but, for now, not big enough ones for me to think the full swing is real.

At this stage, all the arguments are more working hypotheses than anything else. Something is going on, it just isn’t completely clear what.

To start, China apparently revised its tourism data (yet again). The tourism deficit is about 2 percent of GDP—so the estimated tourism deficit matters for the overall balance of payments.

China’s tourism exports—spending by foreign tourists in China—got revised down (after being revised up in the last revision). The flat trajectory of spending by foreign tourists in China is consistent with arrival numbers. But the revisions are a substantial change from what was in the data previously, even if the last rounds of data largely undid the effect of the previous revisions (if that makes sense). 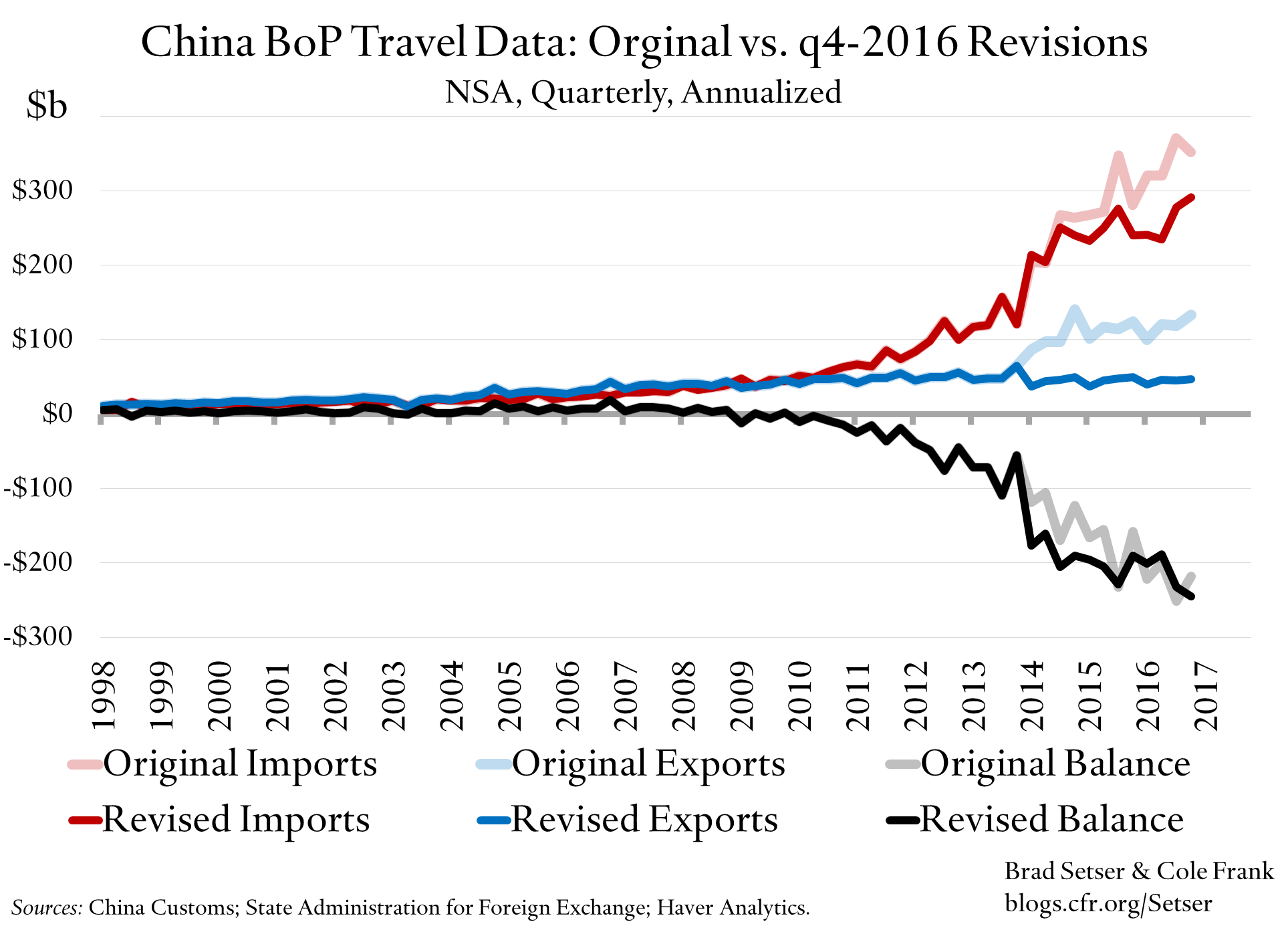 China’s tourism imports jumped in q4-2016, helping bring the current account down (in the seasonally adjusted numbers). And this possibly reflects the impact of the latest revisions—which didn’t change the trajectory of tourism imports (spending by Chinese residents abroad) nearly as much as they changed the trajectory of China’s tourism exports. The big 2014 jump in reported tourism imports remains. That corresponds to the introduction of a new methodology of collecting the data. Take out the q1-2014 jump, and the growth in tourism is more or less in line with the data on the number of Chinese residents travelling abroad.

The second jump—in q4-2016—shows up more obviously in the seasonally adjusted numbers (seasonal adjustment by the way is sensible for tourism: tourism, like the harvest, has a pronounced seasonality). Tourism spending is estimated to have increased by 20 percent year-over-year in q4. Which is possible, but it seems a bit out of line with changes in the number of Chinese residents travelling—I am not aware of a big jump in outbound tourism in q4. (The data for h1 suggests the number of outbound tourists was flat to up slightly). 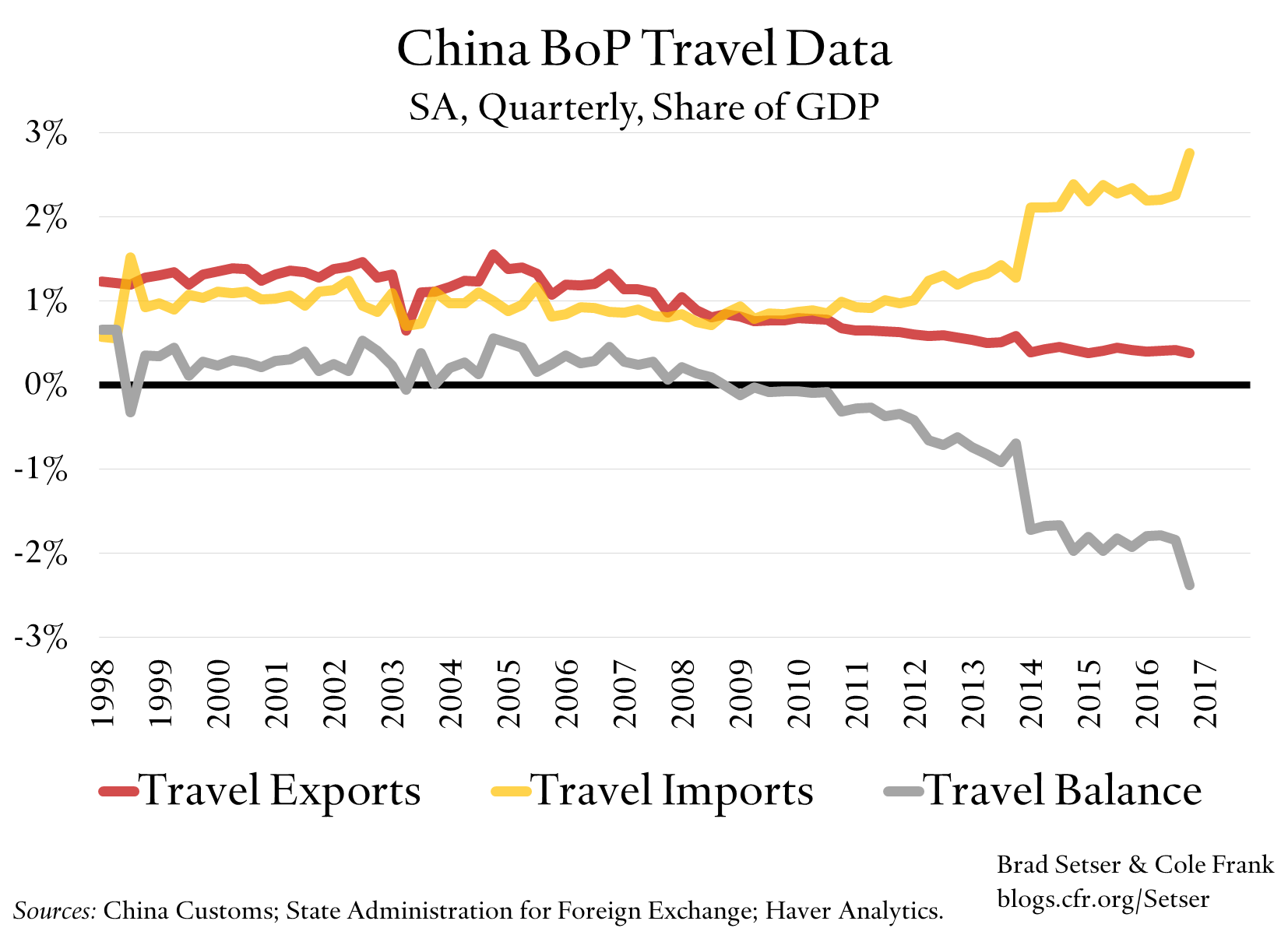 The problem with the “new” tourism data is actually simple: the new methodology almost certainly overcounts actual spending abroad by Chinese tourists, as it counts purchases of assets abroad as tourism imports. Take the Bloomberg story on Chinese residents purchasing expensive art abroad for example. I guess that probably should be counted as a goods imports. But no doubt a portion of the tourism outflow is going into financial assets abroad, and thus really should be in the financial account.

Remember that the Chinese tourism import numbers no longer match up to the data reported on tourism exports in the biggest destinations—notably Hong Kong. Either the Chinese numbers are off, or the numbers reported by countries receiving large numbers of Chinese tourists are off. Suffice to say that since 2013 the number of outbound tourists has increased from about 100 million to around 125 million. And tourism imports in the balance of payments have gone from about $125 billion to about $260 billion (in the revised data). The methodological change in how China reports its tourism data (introduced in 2015, but with an impact on the 2014 numbers) has had a huge impact. 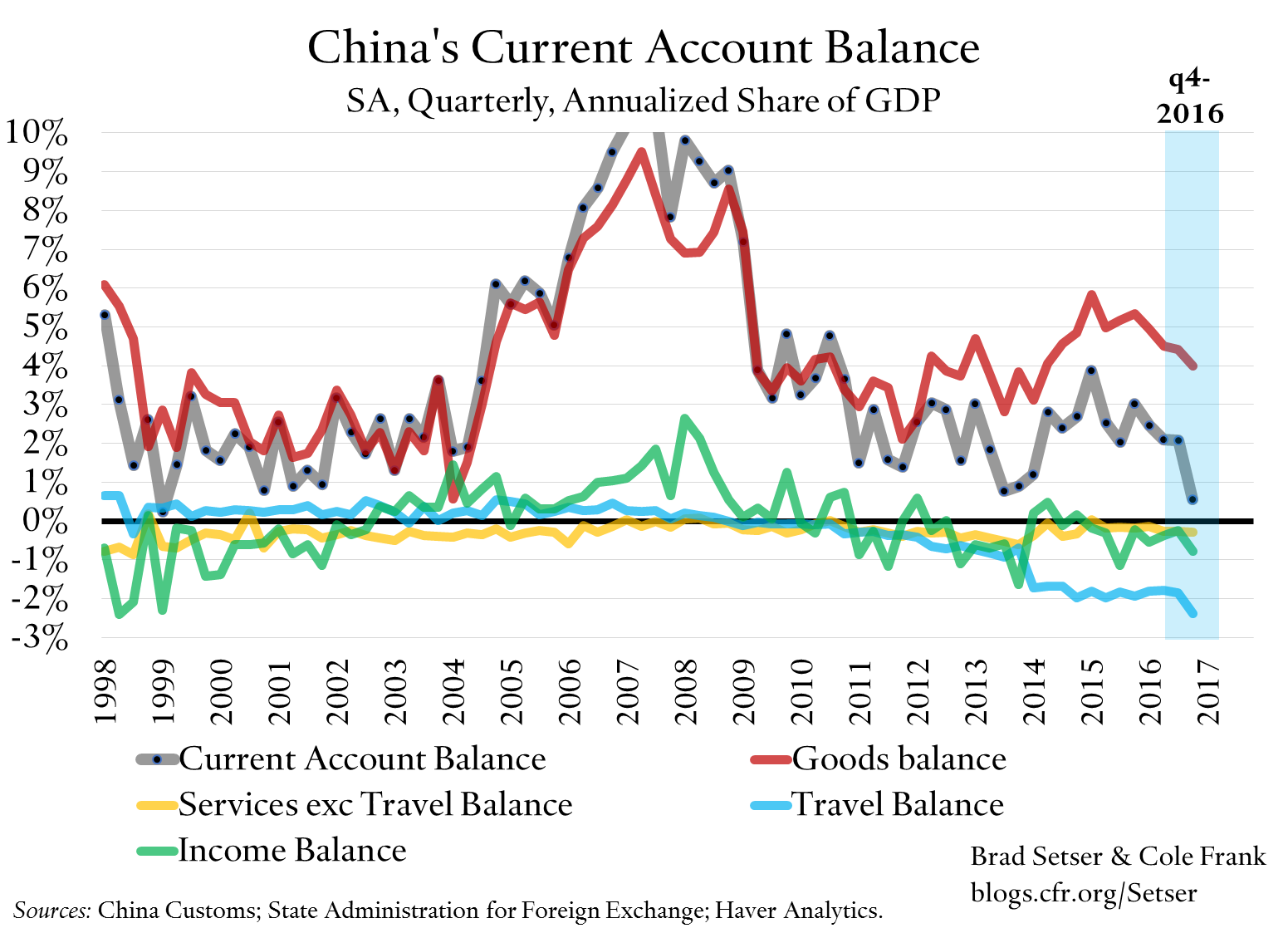 With an annualized tourism deficit that is now close to $250 billion, the question of how much of China's tourism deficit is real, and how much of it reflects disguised outflows matters for the global balance of payments, and for assessments of currency misalignment.*

In some ways the fall in China’s goods surplus in q1—or really the first two months of q1—is more interesting than the fall in the q4 current account. Obviously q1 is heavily influenced by the lunar new year, and the q1 data tends to show pronounced seasonality.

And equally clearly some of the rise in the deficit is from higher commodity prices, and thus fully expected.

But the year-over-year data also shows a really large rise in import volumes—combined January/February import volumes were up 20 percent in the official data.

Combined January and February export volumes were up about 5 percent. That is a huge gap. If it is confirmed in March, it will suggest that China's overall surplus really is falling on the back of China’s stimulus.

I have long thought the slowdown in China's import volumes back in q1-2015 sent an important signal of China’s economic cycle. And right now the trade data points in the opposite direction. March will help establish just how strong that acceleration is.

Of course the acceleration in imports is probably more pronounced than the actual Chinese cycle, as imports tend to reflect trends in investment more than trends in services and are heavily influenced by demand for commodities. And, if China is pulling back on its stimulus, the pace of import growth should moderate. In Martin Wolf's terms, China looks to have escaped the trap of high savings through a combination of credit stimulus and controls in the first quarter, but sustaining the current equilibrium may well require sustained stimulus.

And the sharp rise in imports also raises the possibility that goods imports have been overstated as a way of moving money out of China in an era marked by stronger enforcement of controls. Sort of like the travel data.

That said, there is no question that China’s current account has suddenly become quite volatile. In part that is because a high fraction of China’s goods imports are commodities (the share of manufactured imports has slid as a share of GDP) and commodity prices are volatile. In part it is because of the explosive growth in reported tourism imports, China's propensity to revise the tourism numbers, and the possibility that the current account is now influenced by disguised financial outflows. And in part it is because of new volatility in the import volume numbers. Twenty percent year-over-year increases in volumes aren't common any more, especially when the volume growth isn't a reflection of exports.

Bottom line: A roughly $200 billion (greater than 1.5 percent of China's GDP) swing in the current account over the course of a couple of quarters doesn’t happen that often, absent a true oil shock or a financial crisis. It demands both attention, and a bit of skepticism.

* The current account balance, not the the trade balance, is the variable used in the IMF’s multilateral exchange rate surveillance, and in the United States' foreign exchange report. I at times do wonder if that influences decisions about how to revise China’s balance of payments methodology. The key changes have all had the effect of reducing China’s current account surplus relative to its trade surplus (they are also defensible on technical grounds).