Autos are one of the United States’ most important exports to China—ranking just behind aircraft and soybeans and (at times) non-monetary gold (through Hong Kong). 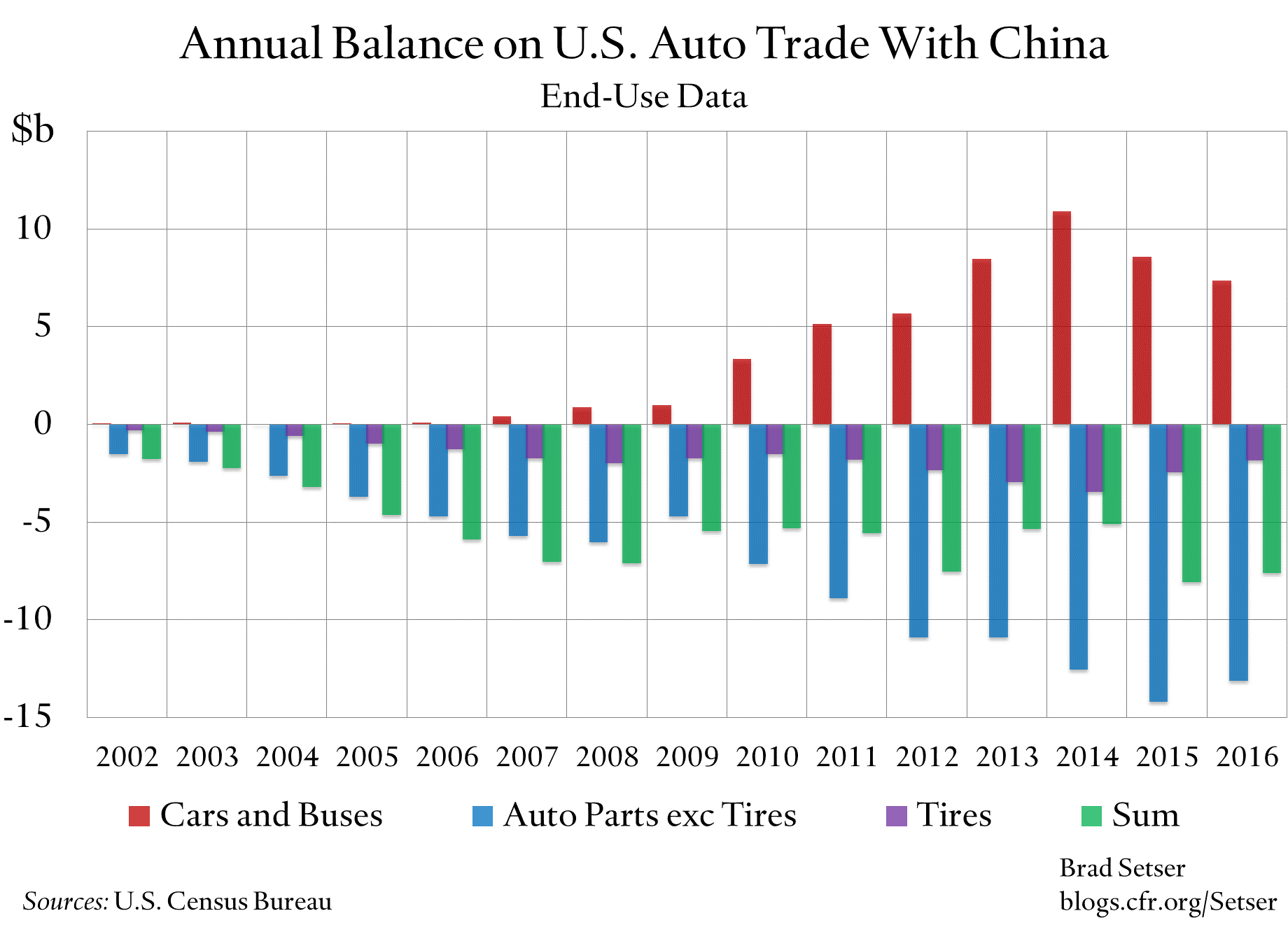 But change is in latest end-use data.

U.S. exports of autos to China have stalled after a few years of spectacular growth subsequent to the global crisis, and the U.S. has started to import finished autos from China. GM is now making a Buick for the both the Chinese and the U.S. market in China. 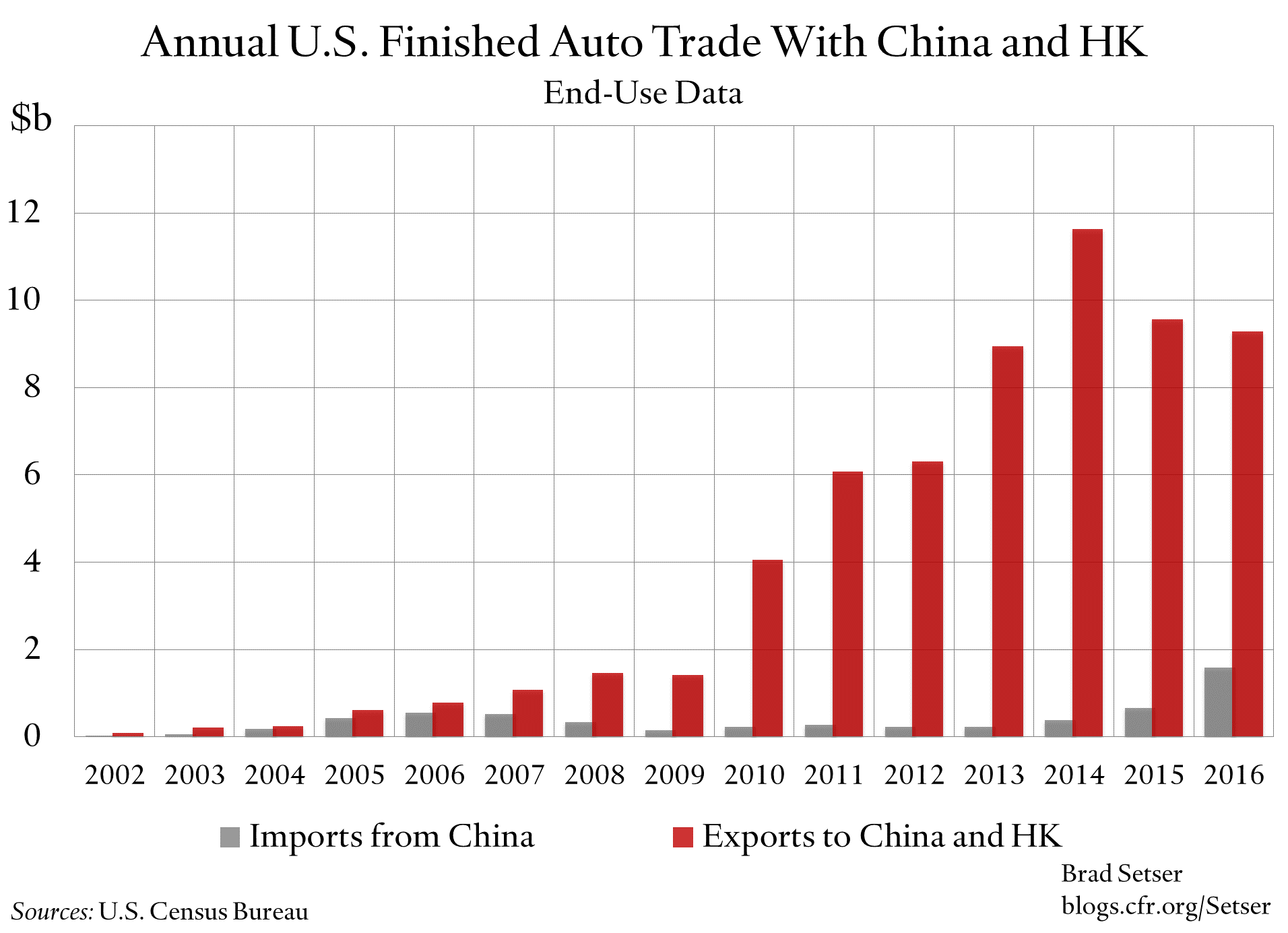 U.S. imports of auto parts remain substantial -- though the growth in imports in 2016 was modest, consistent with the broader slowdown in imports of all kinds. 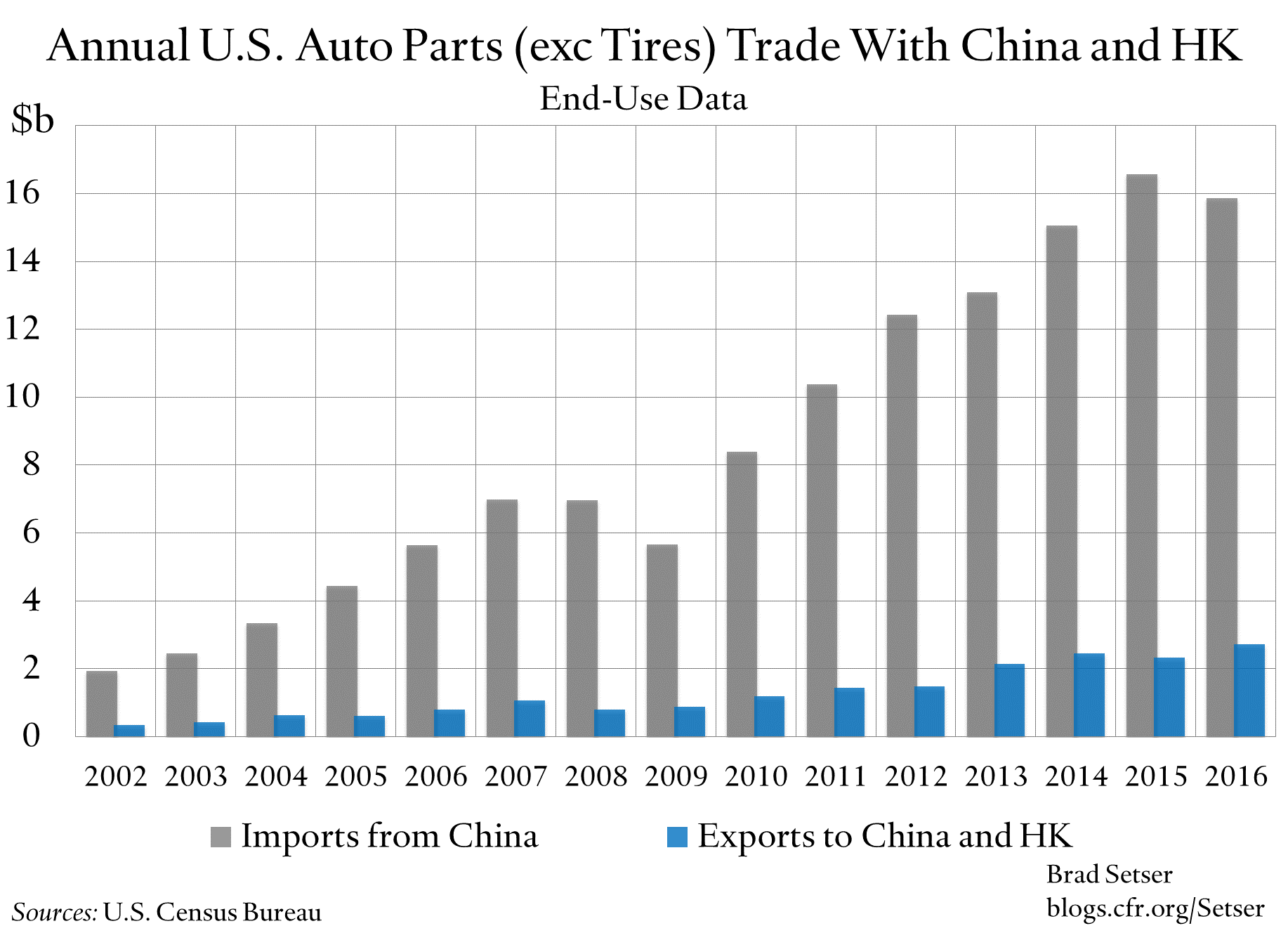 The net deficit in autos and auto parts increased a bit in 2015 -- and remained roughly at that level in 2016 (if you exclude tires, imports of tires are falling again).

And trade tensions in autos are rising. Read Jonathan Swan of Axios.

For all China’s new talk on the virtues of globalization, China’s auto market isn’t all that open.

The United States’ success exporting autos to China has come in the face of substantial barriers at the border, notably China’s 25 percent auto tariff. China also imposes a special tax on cars and SUVs with large engines, which tends to fall on imports (a luxury tax is imminently reasonable by the way; it only arouses suspicion because of the relative absence of domestic Chinese production in this segment).

The backstory behind U.S. auto exports to China is interesting.

Chrysler initially didn’t invest as heavily as GM and Ford inside China—so a few years back it was exporting Jeeps from the U.S. to China rather than producing locally. It has now set up shop in China.*

And when the euro was strong in the mid 2000s, both Mercedes and BMW invested significantly in U.S. production. They tend to make larger, heavier models (notably SUVs) in the U.S., given the preferences of U.S. consumers. And they used their U.S. facilities to serve global luxury markets in these segments. With demand down in the U.S. after the global crisis and with demand booming for larger autos in China, their exports from the U.S. to China soared after the global crisis. China’s auto market is in some ways like that of the U.S.—bigger cars are often preferred (better if you are sitting in the back seat rather than driving yourself).

The results—briefly—were spectacular. U.S. auto exports soared, admittedly from a low base. From under $1 billion to over $10 billion. 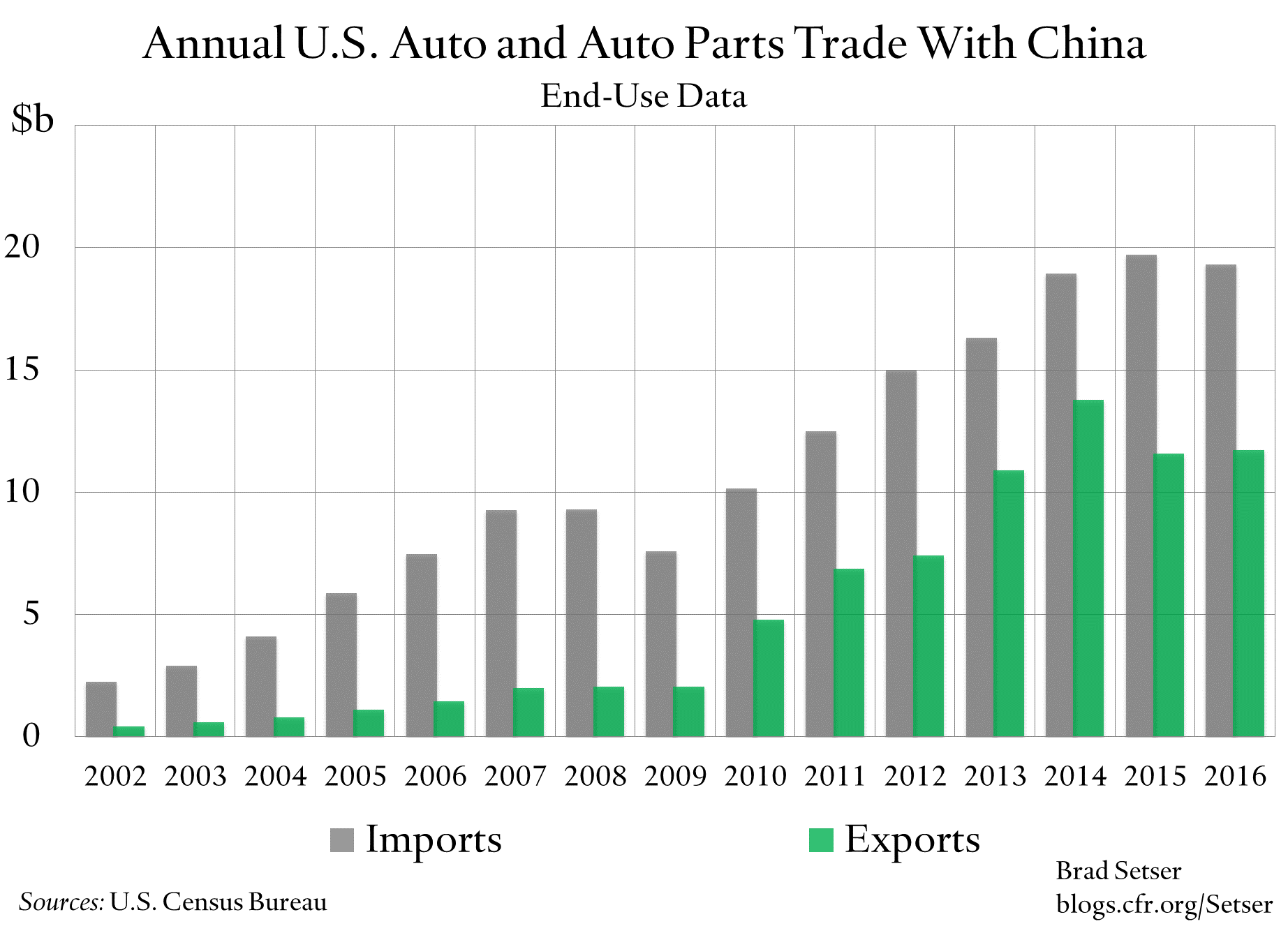 Even with a tilted playing field.

Imports never have been that large relative to China’s total auto market (imports are less than 5 percent of sales, according to Keith Bradsher and Karl Russell of the New York Times). The growth came from booming demand, especially at the top end of the market.

And more and more top end production is being located in China (Chrysler, GM, BMW, and Mercedes are all producing more luxury vehicles in China). The tariffs provide a strong incentive, and there are other incentives to produce locally as well (Audis became the car of choice for Chinese government officials for a while because Audi produced luxury cars in China, and made China’s government procurement list, though with the anti corruption campaign there is pressure to trade down to VWs).

The auto sector is interesting because the current trade rules allow China a great deal of scope to favor domestic production over imports—and because it highlights tension between the interest of U.S. companies (which generally want to invest in China to supply the Chinese market, and are more focused on the “rules” governing investment in China) and U.S. workers (who generally stand to gain far more if U.S.—or German—firms produce cars in the U.S. for the Chinese market).

China has a high tariff—which clearly encourages production in China for the Chinese market.* The 25 percent tariff is a real barrier. It is consistent with the global rules: China’s auto tariff is bound at 25 percent, the EU’s tariff is bound at 10 percent, and the U.S. tariff on autos is bound at 2.5 percent (light trucks, including many SUVs, have a much higher tariff—20 percent). Japan currently doesn’t apply a tariff on autos. But China’s relatively high auto tariffs at least raise a real question about whether the rules negotiated in the 1990s should be updated to reflect China’s emergence as a major auto manufacturer.

China also forces foreign companies that want to invest in China to form joint ventures with domestic Chinese firms. The joint venture (JV) requirement, not the tariff, generates the most flak from the world’s auto companies.

I cannot prove it, but I suspect that the JV requirement’s impact on U.S. (and European) workers is actually more complex than it seems. I would guess that one of the reasons why many firms have decided to export luxury cars to China rather than produce luxury cars in China is concern that their JV partners might develop into competitors. And I also suspect that the JV requirement has discouraged global auto companies from using China as an export base for the global market—as I think any profits from exports sourced from China would need to be split with a Chinese partner. Better to supply global markets from wholly owned subsidiaries.

If Trump and his team do make autos a focus, the result of the negotiations will be interesting.

My guess is that liberalizing the rules governing inward investment in the auto sector without changing the tariff won’t do much to improve the trade balance, and could worsen it (if global firms started to produce more cars in China for export in the absence of the JV requirement).**

Conversely, if China really wants to lead on trade, it could make a down-payment with some unilateral tariff cuts, starting in autos.

* The state by state data is interesting if you know the location of various production facilities, even if the state data is broken down by product and by country, so you have to extrapolate a bit to get exports of a given product to a given country. South Carolina and Alabama are pretty obviously dominated by BMW and Mercedes. And I suspect auto exports from Texas may include Cadillac Escalades shipped to China.

** A country that doesn’t import in equilibrium shouldn’t export as much, so if China doesn’t import the exchange rate “naturally” should appreciate to penalize exporting from China. Obviously that hasn’t consistently been the case for China, but it is important to recognize that policies that impact particular sectors do not on their own determine global outcomes. If China wants to discourage auto imports, the result should be a stronger currency and fewer exports of other things.