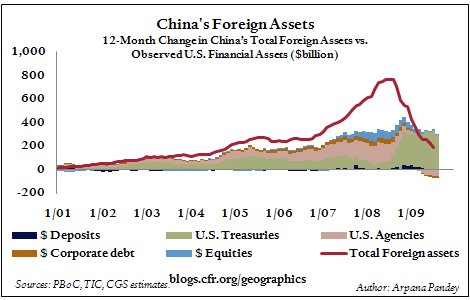 China has accumulated a massive stock of U.S. dollar reserves in recent years. Statements of concern from China regarding the risk that U.S. economic policy might undermine the future purchasing power of these assets has fuelled the market’s concern that China may shift away from dollar purchases. Yet the chart shows that over the 12 months ending in July 2009 China accumulated more dollar-denominated assets, mainly U.S. Treasuries, than foreign assets in total. Despite its rhetoric, China has thus far taken no actions to wean itself off of the dollar.

Wolf: The Rumors of the Dollar’s Death Are Much Exaggerated

Guha: Down But Not Out