Roughly a third ($650 billion) of China’s $1954 billion in reported foreign exchange reserves at the end of March aren’t invested in dollar-denominated assets. That means, among other things, that a 5% move in the dollar one way or another can have a big impact on reported dollar value of China’s euros, yen, pound and other currencies. China’s headline reserves fell in January. But the euro also fell in January. After adjusting for changes in the dollar value of China’s non-dollar portfolio, I find that China’s reserve actually increased a bit in January. Indeed, after adjusting for changes in the valuation of China’s existing euros, pounds and yen, I estimate that China’s reserves increased by $40-45b in the first quarter -- far more than the $8 billion headline increase.

That though hinges on an assumption that China’s various hidden reserves -- the PBoC’s other foreign assets, the CIC’s foreign portfolio, the state banks’ foreign portfolio - didn’t move around too much.* 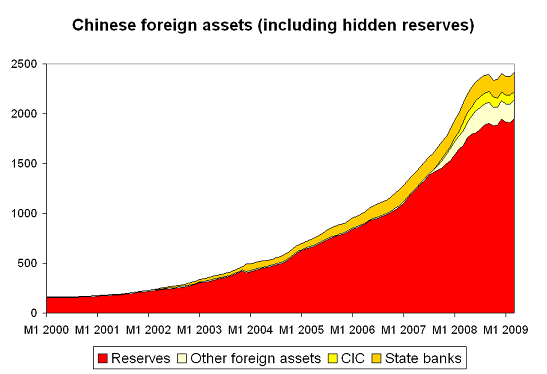 Clearly, the pace of growth in China’s reserves clearly has slowed. Quite dramatically. Reserve growth -- counting all of China’s hidden reserves -- has gone from nearly $200 billion a quarter (if not a bit more) to less than $50 billion a quarter. Indeed, reserve growth over the last several months, after adjusting for valuation changes, has been smaller than China’s trade surplus. 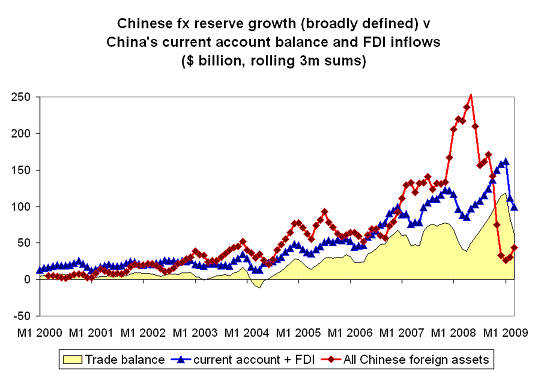 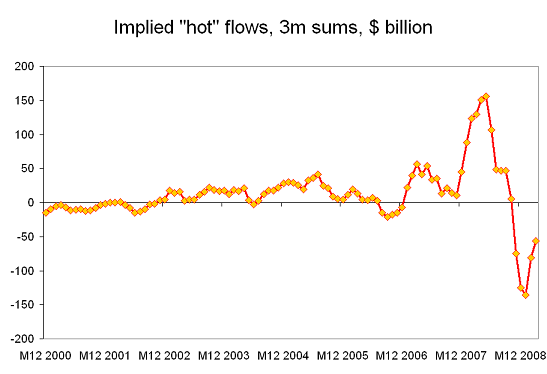 But there is some evidence that the pace of the "hot" outflows has started to slow. Indeed, the evidence showing a turn here -- assuming the data on the state banks’ doesn’t have any surprises -- is better than the evidence showing a turnaround in trade flows.*** The non-deliverable forward market is no longer pricing in a depreciation of China’s currency, and in the past, changes in the NDF market have corresponded reasonable well with hot money flows.

I consequently wouldn’t be totally surprised if the pace of China’s reserve growth started to pick up again over the next couple of quarters. The fall in reserve growth over the past two quarters has corresponded to rise in capital outflows -- not with a sustained fall in China’s trade surplus.

But even if reserve growth picks up a bit, China’s government will likely buy fewer US assets than it did in 2008. Some of those assets though were in a sense bought with "borrowed" money -- the hot inflow. This adjustment though isn’t a bad thing; we all should want China to buy more of the world’s goods and fewer of the world’s bonds.

For now, though, the available data indicates that China is still buying US assets: in January, China’s US holdings rose by about $20 billion (almost all deposits and short-term Treasuries).**** Keith Bradsher’s lede focused on the headline change in China’s reserves in January and February -- the fall in reserves wasn’t adjusted for valuation changes, and thus overstates the actual change in China’s dollar holdings. Yves Smith consequently is a bit more worried than I am. China’s purchases have slowed, but -- if the TIC data is accurate -- they haven’t stopped.

One last point: As Bradsher notes, China’s trade surplus can help to finance the United States (now reduced) trade deficit even if it doesn’t flow directly into China’s central bank. The hot money leaving China has to go somewhere, and no doubt a large fraction currently flows into US dollar-denominated assets. A decent chunk of the outflows seems to be showing up in Hong Kong’s reserves for example, and the HKMA likely holds a dollar-heavily portfolio.

Sustained hot money outflows pose more problems for China than for the US. They imply a lack of domestic confidence in China’s economic prospects. The risk to the US would come if China’s government decided to suddenly stop buying US assets -- or sell its existing assets -- at a point in time when private Chinese investors didn’t want to hold US dollars or US assets.

* The main issue here is what happened to the state banks’ dollar reserve requirement; those dollars seem to be held on deposit at the PBoC, where they are counted as part of the PBoC’s balance sheet as "other foreign assets."

** I am also assuming that China doesn’t mark its bond or equity portfolio to market, and thus changes in the market value of China’s existing investments have no material impact on China’s reported reserves.

*** A fall in the reserve requirement and the PBoC’s other foreign assets reduces reserve growth, and thus would increase estimated hot money outflows. Adding in FDI outflows (Chinese mining companies expanding abroad) and the Rosneft loan, if it wasn’t financed out of the state banks existing pool of foreign exchange, by contrast, would tend to reduce estimated hot money outflows.

Big changes, but not much adjustment: China’s March trade data