Or at least it is on Bloomberg.

I wanted to elaborate on three points:

First, the increase in China’s tourism spending, if it is real, is huge. The reported rise in tourism spending by China since 2012 is about equal to the reported fall in Chinese commodity (primary product) imports. A $200 billion move over roughly 2 and a half years (the Chinese data indicates spending by Chinese tourists abroad--imports of travel services in the data--have increased from $120 billion in 2013 to about $315 billion in the last four quarters of data)* is real money. 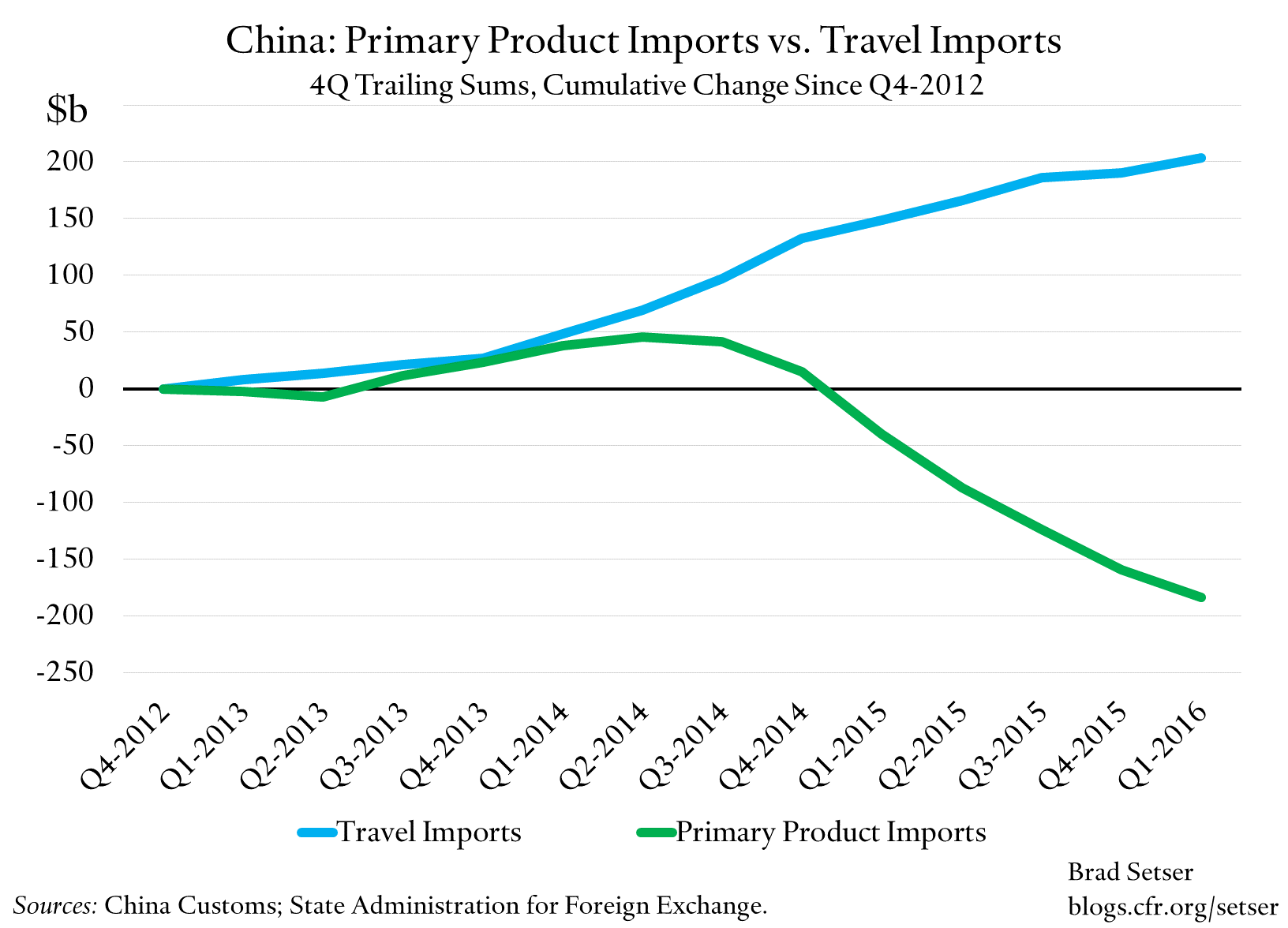 Second, the timing of the rise corresponds to a change in the methodology used to collect China’s balance of payments data. Most of the jump now shows up in the 2014 data.* SAFE’s presentation to the IMF on the implementation of the IMF’s new balance of payments data standard is remarkably honest; they don’t seem to have any idea if their new data set—based on credit card data and the like—really captures tourism spending abroad, or captures something else.** Under a heading titled “related issues to the new method” SAFE notes:

“For example, some remittance reported as travel in ITRS (International Transactions Reporting System) and some overseas purchases via bank card are actually goods transactions, because the money is used for valuables and durable goods, Sometimes, the money is used for investment abroad, which should be included in financial account. However, without further information, it is hard to identify how much should be allocated to goods item or financial account”

My argument is simple: in correcting for potential problems in the old data, China introduced a new set of problems—and those problems appear to be quite large.

Third, I do not doubt that China’s imports of “valuable goods” are significant, and until 2013 often were unreported (e.g. the goods surplus was overstated a bit in the old methodology). China has significant tariffs, a high VAT, and often imposes an additional luxury tax domestically. All that increases the incentive to shop abroad.

But I also think the available evidence indicates that the growth of China’s hidden luxury imports has slowed, not accelerated, since 2013.

Hong Kong’s retail sales have been falling since 2013, with particularly sharp falls in the sale of luxury goods. Ben Bland of the Financial Times recently reported:

"Kingdom Jewellery is trying to stand out among the eerily quiet luxury stores in Hong Kong’s Causeway Bay, once the world’s most expensive shopping district in terms of rents. ’Our customer flow has dropped 60-70 per cent’ since the peak of Chinese luxury spending in 2013, says manager Jacky Sze. ’I don’t have much hope for the rest of this year, or next.’ ... Before demand was hit by President Xi Jinping’s corruption crackdown and the economic slowdown, Chinese tourists were happy to spend up to HK$100,000 ($12,890) on a single purchase at Kingdom. Now many customers are reluctant to spend more than HK$1,000 at a time, according to Mr Sze.... Retail sales in Hong Kong fell by 10 per cent in the first seven months of the year, compared with the same period in 2015, with purchases of jewellery and watches declining by 22 per cent."

A Schroder’s report from early 2016 on the luxury sector was similarly gloomy.

"2015 was a terrible year for the luxury goods sector. ... the main drag was Hong Kong where sales declined at a double digit rate ..."

Yes, Hong Kong lost out to other markets. But it is still the largest destination for Chinese tourists. And even with growing sales to Chinese tourists outside of Hong Kong, total sales of luxury goods have not been great: According to Schroders, LVMH "noted that Louis Vuitton sales to Chinese consumers worldwide grew at low double digits in the first half of last year [2015]."***

And there is another bit of indirect evidence. The United States actually exports a lot of "bling" (gold, diamonds, and jewelry) to “greater” China. It almost all goes to Hong Kong though, not the mainland (it is a big reason why the United States exports around third as much to Hong Kong as it does to the much bigger mainland). 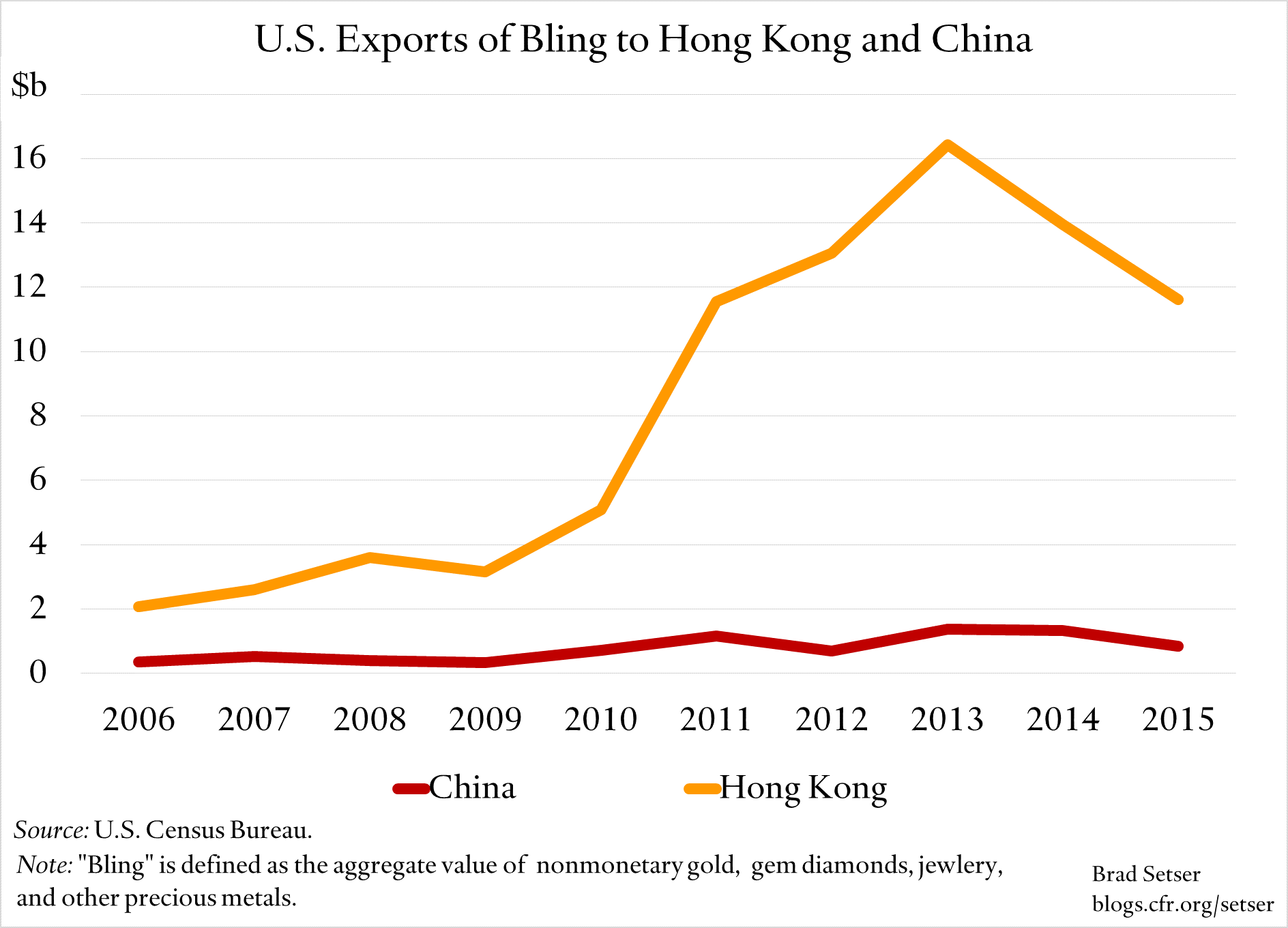 Only a trade data anecdote, I guess. But it reinforces the broader story. It doesn’t seem all that likely that China’s tourism data is capturing a true upturn in spending on goods outside of China.

* I want to recognize Cole Frank of the Council on Foreign Relations, who has helped me with the data analysis on this project.

** One of the things that has frustrated me with the Chinese data is the scale of the revisions. Much of the increase in tourism used to appear in the 2015 data, but it got moved back to 2014—presumably as the new data series was introduced into the older data.