One oft-made argument is that with Trump’s decision not to move forward with the TPP, China has an opportunity to fill the regional trade void. Chinese policy makers are certainly pushing their regional comprehensive economic partnership hard. Nick Lardy of the Peterson Institute, in an article by Eduardo Porter.

“China is the one major power still talking about increased integration,” said Nicholas Lardy, a China specialist at the Peterson Institute. “China is the only major country in the world projecting the idea that globalization brings benefits.”

Perhaps. But I also suspect there are significant obstacles to a Chinese-led regional trading block, obstacles that are independent of the United States.

One. If (almost) all Asian economies are running trade surpluses, they cannot just trade with each other.

There is an old fashioned adding up constraint - one country’s surplus is another’s deficit, and if Asia is running a large surplus collectively, it mathematically has to be selling its goods to the rest of the world. And Asia’s collective surplus in goods trade is now very large. 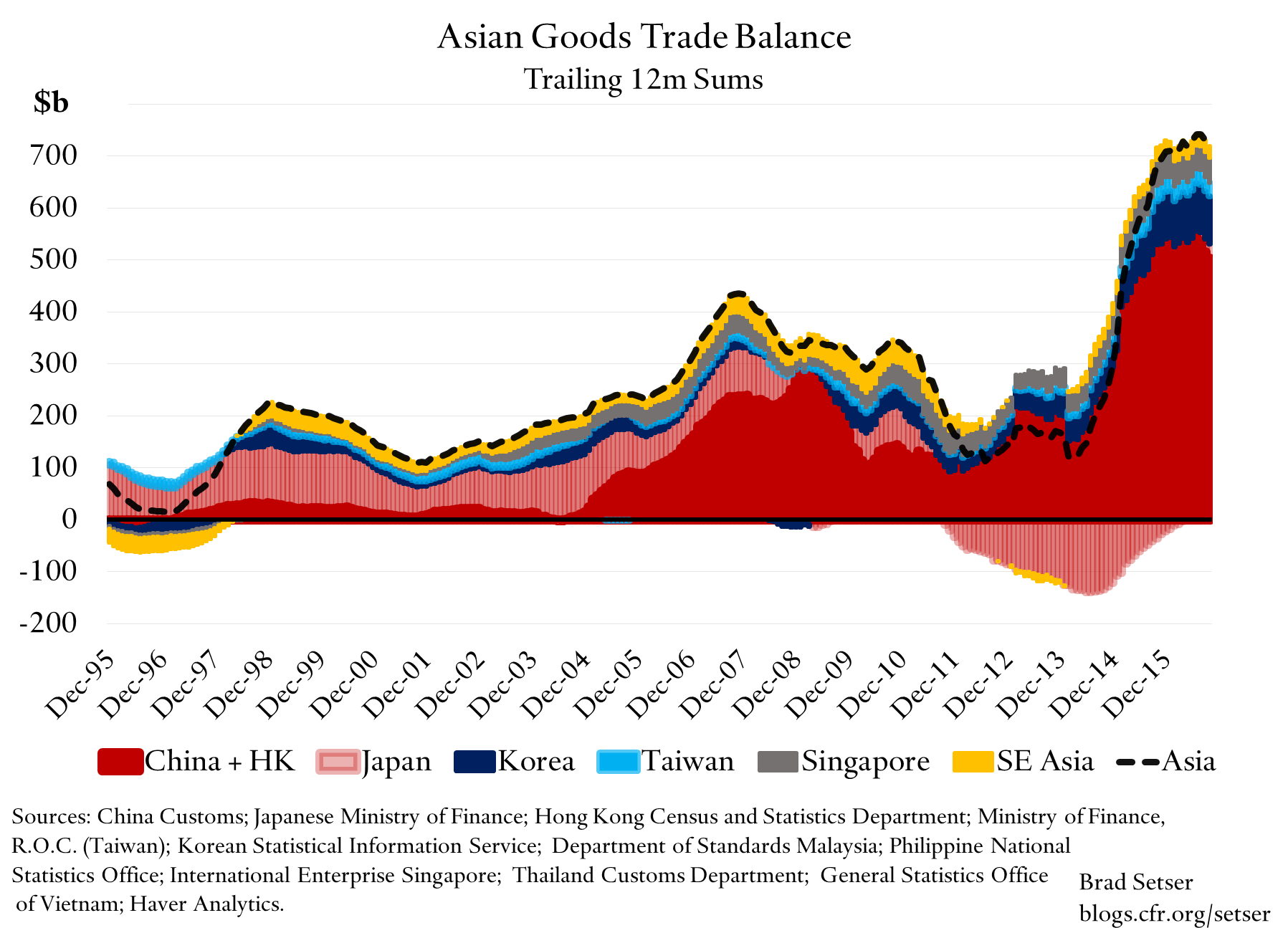 Add in the fact that many of the large Asian economies are exporters of manufacturers and importers of commodities, and it is, I think, self-evident that Asia as a whole needs to run a substantial manufacturing surplus with the rest of the world. For my paper on Asia’s savings glut I estimated that Asia’s aggregate surplus in manufacturing is in the range of two percentage points of world GDP. Some of that surplus is spent on the rest of the world’s commodities, but less now than a couple of years back. And some is spent on service imports, but less -- I suspect -- than many think. Many services are hard to trade across linguistic borders.

Asia right now isn’t in a position where it can just trade with itself, or even just trade with the world’s commodity exporters. So long as Asia still needs large external surpluses to make up for short-falls in internal demand, Asia cannot write the global trade rules on its own.

And, to be clear, I write this from the point of view of someone who wants Asia to rely more on its own internal demand and less on global demand. That shift might raise trade, as Asia imports more from the rest of the world. Or it might lower trade, as stronger Asian currencies discourage production in Asia to meet non-Asian demand. It is hard to predict ex ante the nature of adjustment.

Two. It isn’t clear that access to the Chinese market is all that great a prize. At least not right now.

China is talking a good game on global trade. But the reality is that China’s domestic market for manufactured imports is still small relative to the U.S. and European markets. And it is shrinking relative to China’s GDP and could shrink further if current trends continue. The following chart adjusts for China’s "processing" imports (imports for reexport) -- the comparison isn’t perfect (the U.S. and Europe do not report processing trade), but I am confident it captures a real shift. 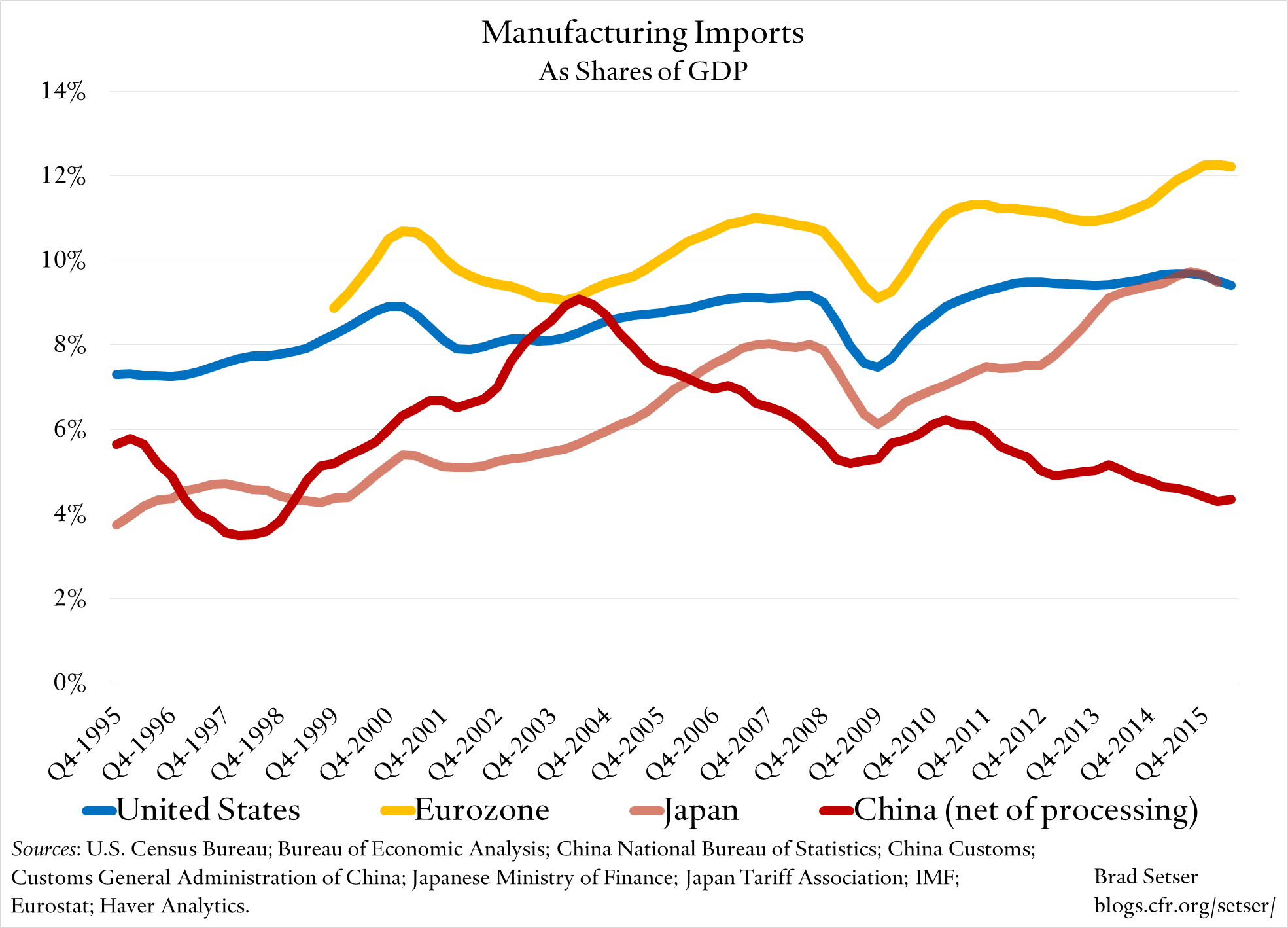 There is a growing body of empirical evidence that has found that China’s attempted shift from investment to consumption means less demand for imports in the short-run. This could change. But for now Chinese consumption demand tilts heavily toward Chinese-made goods (and Chinese-produced services). The growth in China’s goods import volume over the last three years has averaged something like 3% (counting the strong 2013 and the weak 2015), while growth has averaged more than 6.5% (of course).

And, well, China often seems much more interested in using its domestic market to build up its national champion firms than in sharing its domestic market with the world, hence the current round of complaints from foreign firms operating in China. My sense is that China often still doesn’t have a “single” market internally - lots of provinces favor their state-sponsored firms against those of other provinces—let alone a market fully open to global competition. That is a problem for the U.S. and Europe of course. But it is also a potential problem for any Asian economy that thinks it can draw on Chinese demand for manufactures to boost growth.

Who knows, China may be ready to change—and use its consumer market to lure its neighbors into its geopolitical block and try to take on the United States’ recent role as the world’s consumer of first and last resort. Then again, China may well fail to generate enough consumption demand to keep its own economy going if investment falters.

Any country that ties its fortune to China should worry at least a bit about the risk that a further slowdown in China will generate a lot of spare capacity that China will want to export.

Three. The balance-of-payments consistent "vendor-financing" deal on offer from China is a mixed bag for at least some of its neighbors.

The offer is clear enough. China has spare savings. China has spare manufacturing capacity. Chinese firms know how to build infrastructure. And China has been willing to finance, through its state banks, the Chinese Development Bank, the funds set up to support One Belt One Road, and the Asian Infrastructure and Investment Bank, trade deficits inside (and outside) the region.

If others in Asia take the deal and borrow from China to fund sustained trade deficits (deficits that they generally have not wanted to finance in the market when the funds were available because of the risk of a reversal in capital flows) that could bring Asia’s aggregate trade surplus down.

But there is a catch: intra-Asian vendor financing—borrowing from China so that China can export more—is somewhat different than a balanced two way expansion of Asian trade.

I can see why this kind of deal might appeal to poorer countries in Asia, particularly those that need more infrastructure and earn foreign exchange primarily through exporting commodities rather than manufactures.

Less so Korea or Japan.

Indeed, Korea and Japan have their own surpluses, and might want their own form of vendor financing. Of course, the main Asian surplus countries could try to join forces. The possibility of multilateral rather than bilateral financing with open competition for projects is part of the appeal of the Asian Infrastructure and Investment Bank. But the combined current account surplus of Japan, Korea, and China is around $500 billion (throw in Singapore and Taiwan and the sum grows to more than $600 billion). It would take a huge shift for there to be $500 billion in deficits elsewhere in Asia to finance.

Bottom line: Asia remains short on internal demand and needs to export to the rest of the world, and new institutions that facilitate trade among Asian economies on their own won’t change that fact. Call me a balance of payments fundamentalist, but I prefer discussions of trade that mention the trade balance. And I am skeptical that China is really willing to open up its domestic market to imports, even if the opening is only to its (new) friends, when the macro story of the past few years has been China’s difficulties in generating enough internal demand for goods to absorb China’s own supply -- at least during periods when China has tried to dampen domestic credit growth.