He gets three half answers.

Drezner’s first question: “Just how much third-party holdings of U.S. debt does Saudi Arabia have?”

Wish I knew. The custodial data doesn’t really help us out much. $117 billion—around 20 percent of reserves—certainly seems too low. So it is likely that the ultimate beneficiaries of some of the Treasuries custodied in places like London, Luxembourg or even Switzerland (Swiss holdings are bit higher than can be explained by the Swiss National Bank’s large reserves) are in Saudi Arabia or elsewhere in the Gulf. 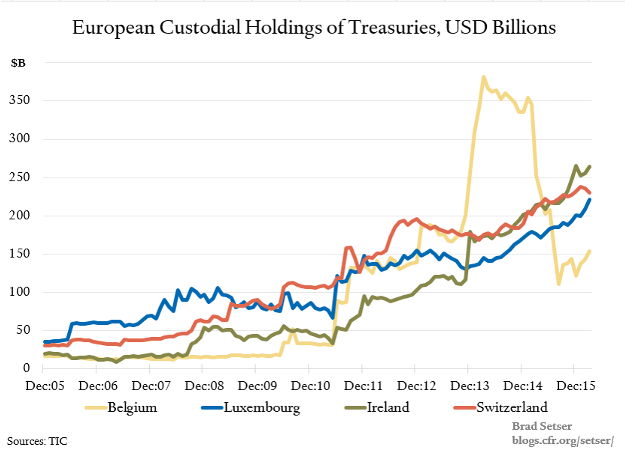 The Saudi Arabian Monetary Agency (SAMA) is generally thought to be a bit of a hybrid between a pure central bank reserve manager (which invests mostly in liquid assets, typically government bonds) and a sovereign wealth fund (which invests in a broader range of assets, including illiquid assets). So there is no reason to think that all of SAMA’s assets are in Treasuries.

There are a couple of benchmarks though that might help.

If you sum the Treasury holdings of China and Belgium in the Treasury International Capital (TIC) data (Belgium is pretty clearly China, not the Gulf) and compare that total with China’s reserves, Treasuries now look to be around 40 percent of China’s total reserves. Other countries have moved back into agencies, so Treasury holdings aren’t a pure proxy for a country’s holdings of liquid dollar bonds. But this still set out a benchmark of sorts.

And if you look at the IMF’s global reserves data (sadly less useful than it once was, as the data for emerging economies is no longer broken out separately), central banks globally hold about 65 percent of their reserves in dollars. This also sets out a benchmark. Countries that manage their currencies tightly against the dollar would normally be expected to hold a higher share of their reserves in dollars than the global average, though this imperative dissipates a bit when a country’s reserves far exceeds its short-term needs.

One other thing. The Saudis have a lot of funds on deposit in the world’s banks. $188 billion or so, according data the Saudis disclose. That is large compared to the just under $400 billion in securities the Saudis report. A large share of those deposits are likely in dollars, though they do not appear to be in U.S. banks. The short-term TIC data shows around $60 billion in bank deposits from all of the Gulf.

That said, I would not be surprised if the Saudis had a hundred billion dollars or so more in dollar bonds than shows up the TIC data. Enough to make it hard to move rapidly into other assets.

Drezner’s second question: “Why did the United States Treasury choose to reveal the $116 billion figure this month?”

Wish I knew. A few guesses:

1) It got asked. Bloomberg created a constituency for raising the question internally.

2) It is consistent with the Treasury’s broader push for transparency on reserves and exchange rate intervention. If the Treasury wants China and Korea to report actual intervention in the market, the Treasury couldn’t really be holding back data itself. There was a reason to say yes.

3) The Saudis have quietly increased their reserve transparency. A few years back they started reporting their full reserve portfolio—not just a narrow liquidity tranche—in the IMF’s international financial statistics. And recently they signed on to the Special Data Dissemination Standard (SDDS) disclosure standards. The times are a-changing. The Saudis here are acting more like other countries, making it a bit easier to treat Saudis a bit more like other countries.

4) The original reason for the aggregation of Asian oil has long disappeared. Ted Truman of Peterson is absolutely right on this. The “Asian oil” category was a relic of the ‘70s and early ‘80s. And it is quite clear that the actual U.S. custodial holdings were not hiding any real secret, and releasing the data would not move markets. The reality was that even with the data aggregation, the Gulf was not making heavy use of U.S. custodians. The Saudis at their peak had close to $750 billion in reserves. The Kuwait Investment Authority likely has around half a trillion in foreign assets. Abu Dhabi’s various funds are comparable if not larger in size. Qatar built up a significant sovereign wealth fund. All peg to the dollar, more or less. Yet the survey data never showed much more than half a trillion in U.S. custodial holdings—split roughly equally between Treasuries and equities. If you do the math, the U.S. data never held the secret to the Gulf’s portfolio.

Now my question for the foreign policy specialists: did this modest shift in Treasury policy require a broader shift in U.S. policy toward Saudi Arabia, or was this something that the broader foreign policy community did not care that much about?

Drezner’s third question: “Given Saudi Arabia’s myriad political and economic difficulties, what can we divine from this information?”

Not much. The change in headline reserves, and the change in the “fiscal reserves” that SAMA reports monthly matter much more than the details of the Saudi portfolio. The basic challenge for the Saudis is that spending now significantly exceeds current revenues, and will for a long time barring a further increase in the price of oil. Imports are also higher than can be supported by current export revenues. The underlying gap has to be closed by running down reserves, selling off assets, or borrowing from the rest of the world. And the size of the gap is quite different if the long-run price of oil is $40 versus $60.

Saudi Arabia’s current account breakeven oil price (the external break even is the price where imports and exports balance) looks to have been around $70 in 2015, a bit higher than the IMF estimated.

While I am on the topic of the world’s biggest exporter of oil, one final thought:

Shouldn’t Saudi Arabia figure out how it plans to tax oil production before it tries to privatize Aramco, even in part? Most oil exporters that allow private production out of low cost fields have a production tax, and many also have an export tax. Some have a corporate income tax as well. Yes, this means acknowledging that oil supports the budget and will continue to do so for some time, but managing oil revenue dependence is part of life as an oil exporter.