Skip to main content
Does Currency Pressure Work? The Case of Taiwan

I confess that I probably am the only person in the world who—setting aside the internal politics of the Trump White House—would be excited to write the Treasury’s foreign currency report this quarter.

Not because of China. I would say China met the existing 2015 manipulation criteria in the past and I would put the criteria under review (I personally think the bilateral surplus analysis should be complemented with value-added measures, which would reallocate some of China’s surplus to Japan, Korea, Taiwan, and the like). I might even find a way to warn that a country that guides its currency down can be guilty of manipulation under the 1988 law even if it is selling some of its foreign currency reserves (a controlled depreciation is hard, and usually requires reserve sales to manage the pace of depreciation).

But not name China now.

The U.S. would be completely isolated in naming China now, the impact of China’s 2016 stimulus seems to have been bigger than the impact of the renminbi’s depreciation and there is plenty of scope to get tough on China on other trade issues. As the Financial Times notes" "It is in no one’s interest, including the US, if Beijing suddenly stops intervening to defend the renminbi and a destabilising rush of capital flight and sharp devaluation follows."

Rather, I would be excited to find ways of keeping the heat on Korea and Taiwan up, even if neither likely meets all three of the criteria in the 2015 Trade Enforcement Act. And, well, geopolitics probably is a constraint on getting too tough on Korea right now.

It is often argued that countries won’t change their currency policies with a gun pointed to their heads, so explicit threats won’t work. Fair enough: threats do not always work (see the Freedom Caucus, health care).

On the other hand, sometimes countries get a bit locked into a certain set of export promoting policies, and won’t change unless their feet are held to the proverbial fire.

Korea for example still seems pretty comfortable intervening to keep the won in a band. It seems to have intervened again to limit the won's appreciation in late March (at around won 1115, the market has subsequently turned). And Korea's band is set in a way that keeps the won much weaker than it was before the global crisis, allowing foreign demand (via the trade surplus) to help offset the domestic impact of Korea’s weak social safety net, forced pension savings, and tight fiscal policy.

And Taiwan has been comfortable with a weak New Taiwan dollar maintained in part through intervention and in part through encouraging Taiwanese financial institutions (life insurers) to invest ever larger sums abroad.

The last Treasury foreign exchange report noted that Taiwan met the current account surplus and reserve accumulation criteria of the 2015 trade law. It escaped being dinged because of its small bilateral surplus with the United States. 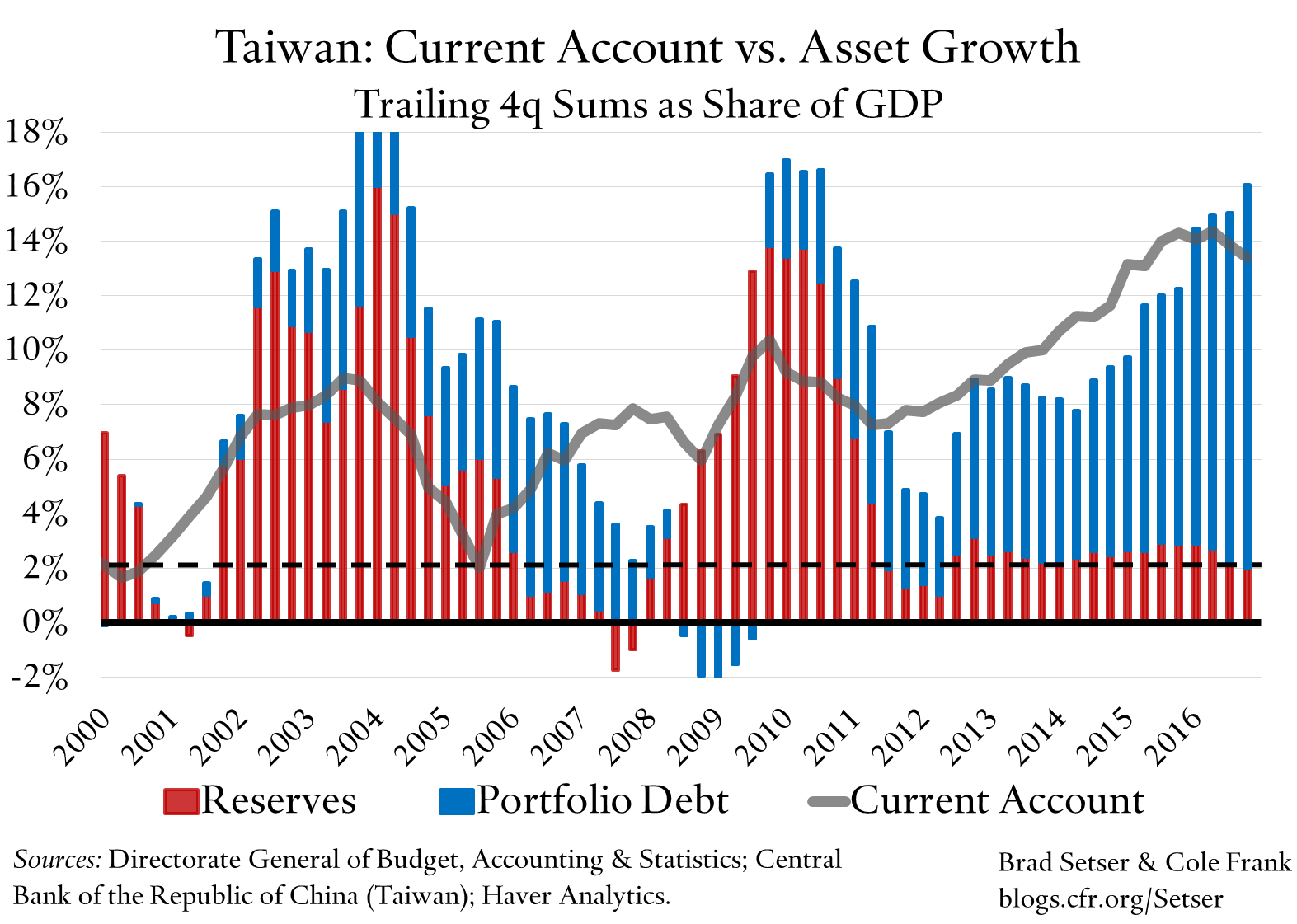 That report may have gotten Taiwan’s attention (I certainly tried to help the process along too).

Taiwan’s intervention fell off a bit in the fourth quarter.

And Taiwan is reported to have largely kept out of the market in the first quarter of 2017. That is one of the reasons why the New Taiwan dollar appreciated by about 5 percent against the U.S. dollar (and against the yuan—which probably matters more for Taiwan).

As a result, Taiwan’s reported reserve growth (net of interest income) over the last four quarters of data (calendar 2016) dipped to right 2 percent of GDP (The Treasury threshold).

That alone shouldn’t let Taiwan off the hook though. We don’t know how much Taiwan really intervened, because Taiwan doesn’t release data on its forward book (Taiwan has not voluntary adopted the SDDS disclosure standard, which it could do even if it isn't a member of the IMF). Taiwan claims it doesn’t intervene in the forward market, but, well, the old notion of “trust but verify” would seem to be relevant here. If Taiwan doesn’t have a forward book, it shouldn’t have a problem releasing the relevant data—including the historical data.

Now the Treasury calculates reserve growth without explicit reference to the balance of payments data. It adjusts headline reserves for valuation, and it nets out estimated interest income. The Treasury's interest income adjustment—which is debatable, I personally think interest income should be sold for domestic currency, with the proceeds paying the coupon on domestic sterilization instruments and with any excess going into a reserve fund or sent back to the government—should help Taiwan. It should pull Taiwan's intervention below 2% of GDP in the Treasury's eye (the details of how you do the calculation matter it turns out).

My gut is thus that Taiwan no longer meets two of the three existing Treasury criteria. So if Treasury sticks to those criteria, Taiwan likely has gotten itself off the watch list.

Yet the battle isn’t over. Less intervention has meant that the New Taiwan dollar has appreciated a bit. But its currency is now getting back to its 2013 or 2014 levels (against the dollar). Taiwan may want to resume its intervention. 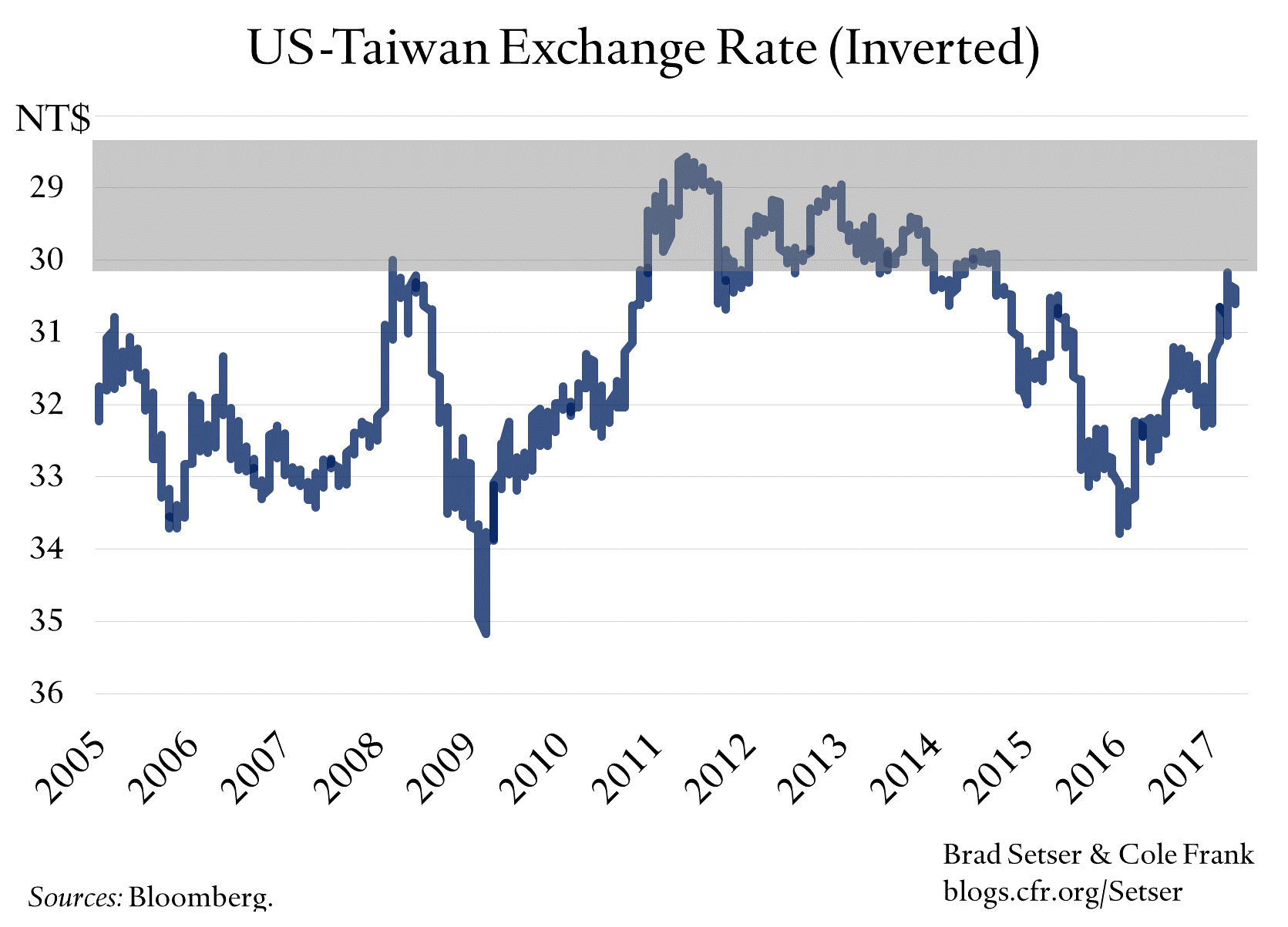 Yet with a current account surplus that is still over 13 percent of GDP, it really should tolerate a bit more appreciation.

There is one other thing, which is a bit more technical.

Taiwan’s life insurers have a ton of foreign assets. And they have added to their foreign asset portfolio at a very impressive clip over the last several years when the New Taiwan dollar was weak. So long as the government intervenes to keep the New Taiwan dollar relative weak, they won’t take large losses on their investments. And as the new Taiwan dollar rises, they take losses. Fair. The risk of such losses helps deter large currency mismatches. But at some point they might need to hedge against the risk of further appreciation.

That in turn could accelerate the move…

Or put pressure on Taiwan’s central bank to intervene forward.