Fred Bergsten of the Peterson Institute has long argued for target zones around the major exchange rates. In the past twenty years, no G-3 economy has followed Bergsten’s policy advice.* The world’s biggest advanced economies have wanted to maintain monetary policy independence, and—Japan perhaps excepted, at least during certain periods—they haven’t viewed foreign exchange intervention as an independent policy tool.

China formally has a band around its daily fix, but its exchange rate is still more of a peg (now a basket peg, without any obvious directional crawl over the last 7 months) than anything else.

I though increasingly think that Korea’s exchange rate management could be described as a target zone of sorts. 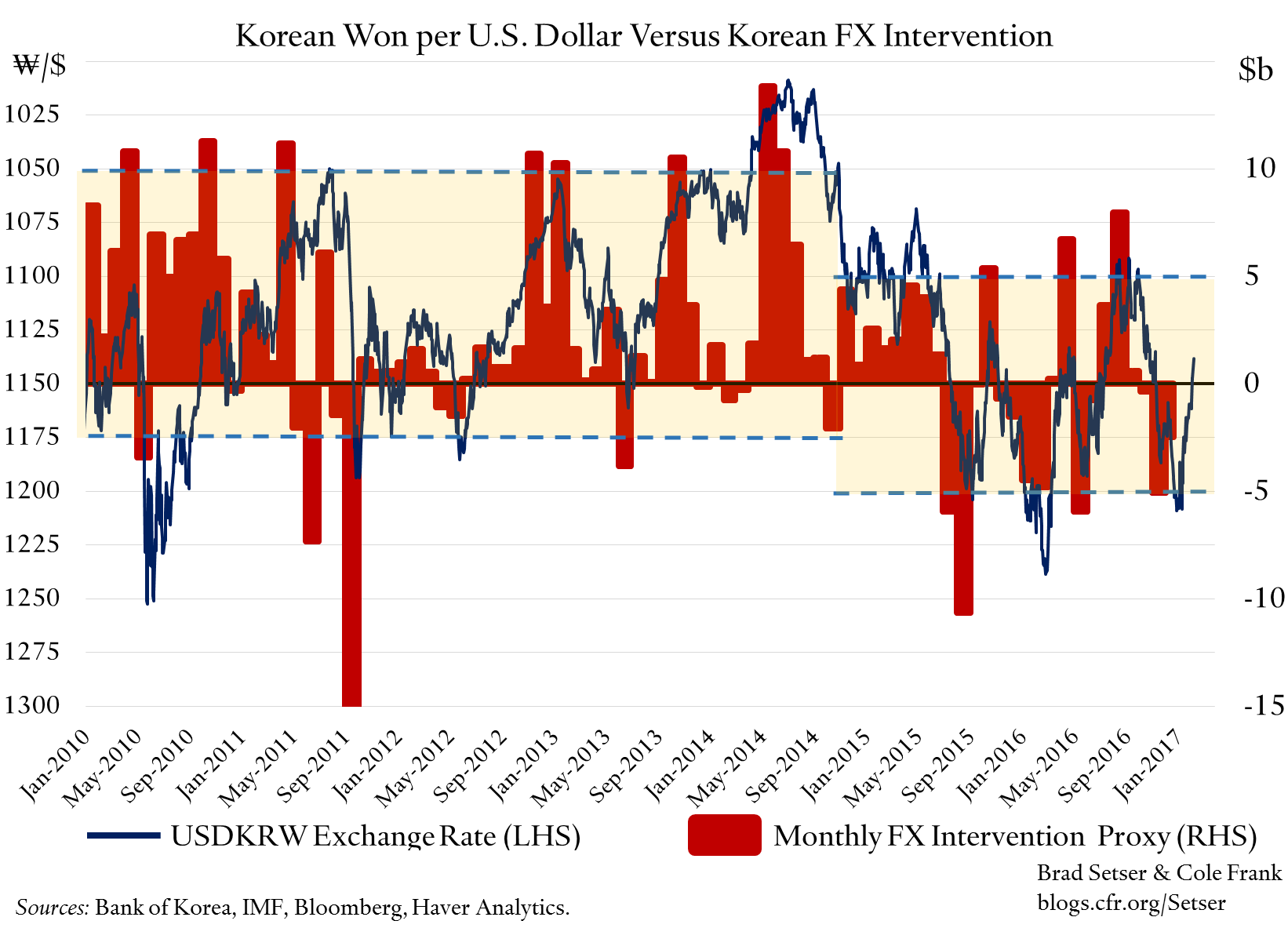 As a result, Korea intervened heavily to cap won strength in q3 2016. Counting the change in its forward position, government deposits, and government purchases of foreign debt securities, its total foreign exchange purchases in q3 were roughly $12 billion (about 3.5 percent of GDP).**

It then turned around and sold dollars to limit won weakness in q4 2016. Using the same metric, total sales reached $8 billion, or around 2.5 percent of GDP (counting the change in the forward book is important here).

And it presumably stayed mostly on the sidelines in January, as the won moved within Korea’s zone of intervention (the Koreans also have been hinting that they may need to intervene a bit less to stay off Trump’s radar. See Christine Kim of Reuters. Worth watching.)

Korea’s target zone isn’t declared. It has to be inferred from watching the levels where Korea intervenes. And the level where the Koreans intervene has shifted over time. For most of the post-crisis period, they intervened at 1050 against the dollar—and briefly they allowed the won to appreciate all the way to 1000 before intervening. But over the past couple of years Korea’s intervention to limit won appreciation has typically come at around the 1100 mark.***

And this raises an important question for both the IMF and the U.S. Treasury in their exchange rate surveillance. Does the exchange rate where intervention occurs matter, or just the amount? Korea’s total intervention over the last 12 months—even with my adjustments for forwards and the debt purchases by the government—hasn’t been significant. After q4, the government on net looks to have sold about $5 billion over the course of the year. It on net bought in the second half of 2016. But its net buying in the second hold of the year certainly doesn’t cross the 2 percent of GDP thresh-hold the U.S. Treasury set out a year ago. But looking only at total intervention over the course of a turbulent year, in my view, also misses a lot of the story. Korea bought and sold, buying a bit more than 3 percent of GDP (annualized) in q3. But its buying and selling in my view raises the question of whether it is buying and selling at the right levels. And given Korea’s ongoing trade and current account surpluses, I would argue the answer to that question is still "no."

* Edited after posting. Fred Bergsten has indicated the post-Louvre reference rates were a target zone of sorts. I confess that I wasn’t thinking back to the 1980s when I wrote this.

** I have left out the National Pension Service’s ongoing purchases of foreign equities, which totals—based on the balance of payments data—around $12 billion (roughly 1 percent of GDP). That ongoing flow certainly raises Korea’s current account surplus (it is financed out of tax withholdings, as the social security system takes in far more in contributions than it pays out) and structurally weakens the won. But it isn’t classically considered intervention.