Over the past few months, I’ve found myself invited to a growing number of workshops, meetings, and conferences focused on the surprising growth in U.S. and world oil supplies. At every one of those, someone (often me) tries to inject climate change into the discussion. Invariably, that mostly fails.

Steve LeVine has apparently been having similar experiences. In an insightful post today at Foreign Policy, he drills down on the tension between the emerging “golden age of oil” narrative and the need to tackle emissions. Here’s his most striking observation:

“The absence of any detailed analysis of environmental [i.e. climate] risk from golden-age enthusiasts, as well as their frequently dismissive attitude toward the issue when it is raised, lends them a surreal political quality.”

Steve interviews several people in an attempt to fuel a more coherent discussion. Frank Verrastro of CSIS tells him that if “the new oil finds are developed full” (Steve’s words) then we will “blow through [our] emissions targets” (Frank’s). Peter Rutland, a Wesleyan University professor, adds that “in the absence of U.S. leadership, I tend to agree with NASA’s James Hansen that it is ’game over for the planet’.”

I find it useful to separate the question of how oil abundance might affect climate outcomes into a physical/economic dimension and a political one.

Start with the physical and economic elements. Lots of oil intuitively means lots of emissions. How, though, does this shake out economically? The likely impact is smaller than you might think, in part because oil is only part of the emissions picture, and in part because oil consumption is driven by a lot more than how easy the fuel is to produce. Here are global emissions projections for three oil price scenarios from last year’s International Energy Outlook: 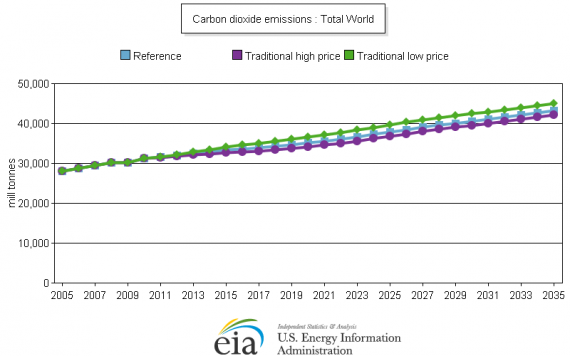 All of these emissions paths are likely to be disastrous for climate change. The case with low oil prices represents a limit of how dangerous oil abundance could be for climate change. (Abundant oil encourages consumption and thus emissions by driving down prices.) The results are undoubtedly ugly. But the reference and high price cases, which are both variations on the oil scarcity theme, are almost as bad. The difference between oil scarcity and abundance isn’t as automatically consequential for climate change as one might suppose.

What I’ve left out, though, is the political dimension. Abundant oil can influence emissions by changing the political environment in which battles over what to do about our energy systems play out. This might ultimately be more consequential for emissions than the economic and physical influences are.

The influence of oil abundance on climate policy could run either way.

A sense of oil abundance could reduce any urgency surrounding efforts to curb traditional consumption of fossil fuels. The popular discourse often conflates the dangers posed by oil scarcity and climate change. If oil scarcity concerns weaken, then, it wouldn’t be surprising to see climate ones fade too. Since serious leverage over emissions will ultimately require concerted action from policymakers, the consequences of this dynamic don’t look good.

But a belief that oil is newly plentiful could also cut the other way. Oil scarcity could drive policymakers toward promoting synthetic fuels that actually have worse climate consequences than oil does. Let me highlight one possibility: efforts to convert coal to liquid fuels will be a lot more popular if countries fear that oil resources are scarce than if they believe that they’re abundant. Alas coal-to-liquids (absent carbon capture and sequestration) yields nearly twice the emissions of conventional oil. Oil abundance could actually blunt this dynamic. That would be good news for emissions.

My sense is that the political dynamics are more important than the economic and physical ones here.  So which way will things actually break? Only a fool would try to predict that outcome. Perhaps I’ll tackle it in a future post.

Back to the Future of U.S. Energy Security