I really liked the ECB’s recent report on the slowdown in global trade (summarized here), for five reasons.

1) It doesn’t assume that trade should always grow faster than output. A liberalization of trade (or a fall in transportation costs—or less attractively, new opportunities to take advantage of transfer pricing) should lead to expansion of trade, but only until a new equilibrium level is reached. In the long-run, an elasticity of around 1 (e.g. trade grows with demand for traded goods) makes some sense.

2) It (implicitly) casts a somewhat skeptical eye on the expansion of trade from 2001 to 2007, and doesn’t assume that the growth in trade over this period was completely sustainable. The 2001-07 expansion of trade was associated with an exceptionally fast pace of growth in Chinese exports, one, I would add, not matched by comparable growth in China’s imports (especially of manufactures); it thus was sustainable only so long as the rest of the world ran large external deficits to balance China’s large surplus.

"In 2001- 07, China’s exports rose faster by about 15 percentage points than import demand in its main markets; by 2008-13, this differential had fallen to 6 percentage points (see Chart A). Waning competitiveness over that period may have played a role: China’s real effective exchange rate (based on relative producer prices) has appreciated by about one-quarter since 2005. At the same time, China’s exports had to slow eventually – they cannot outstrip the expansion of export markets in the long term."

During this period Chinese export growth filtered throughout Asia. Rising Chinese exports to Europe, the United States, and commodity exporters (who could afford to buy more manufactures because the price of commodities rose) led to an increase in Chinese imports of components (global value chains), though after 2004, as I will argue below, component imports started to lag export growth.

3) It notes that the recent slowdown in trade has been marked by a very large shift in China’s import elasticity. For the past several years Chinese import growth has significantly lagged Chinese GDP growth.

"The recent decline in China’s income elasticity of imports has been striking and has made a marked contribution to the fall in the world trade elasticity. China’s trade elasticity dropped from 1.8 in 1980- 2007 to 0.8 in 2012-15. The fall in imports in 2015 was particularly stark, with imports expanding by just 2%, despite robust economic activity"

(Of course, another explanation for the 2015 gap between imports and growth is that China’s 2015 GDP growth was overstated)

5) It shares my skepticism about the quality of data on services trade (China isn’t helping, but China isn’t the only culprit) and focuses on the more accurately measured goods trade.

"Statistics on trade in services suffer from greater measurement problems than statistics on trade in goods. Historically, owing to tariff revenues, flows of goods have been recorded at borders with high accuracy, but service flows are much more abstract and harder to capture, leading to weaker compilation practices."

I wanted to supplement the formal analysis in the ECB’s paper with a few additional graphs—focusing in particular on China.

The period from 2001 to 2008 is marked by the very rapid growth in China’s exports of manufactures, relative to both its GDP and to world GDP. Until 2004, the growth in exports was matched by growth in manufacturing imports (processing imports, but also for domestic use). But as the following chart shows, there is a bit of a break in the import data from 2004 on. It stopped keeping pace with exports. 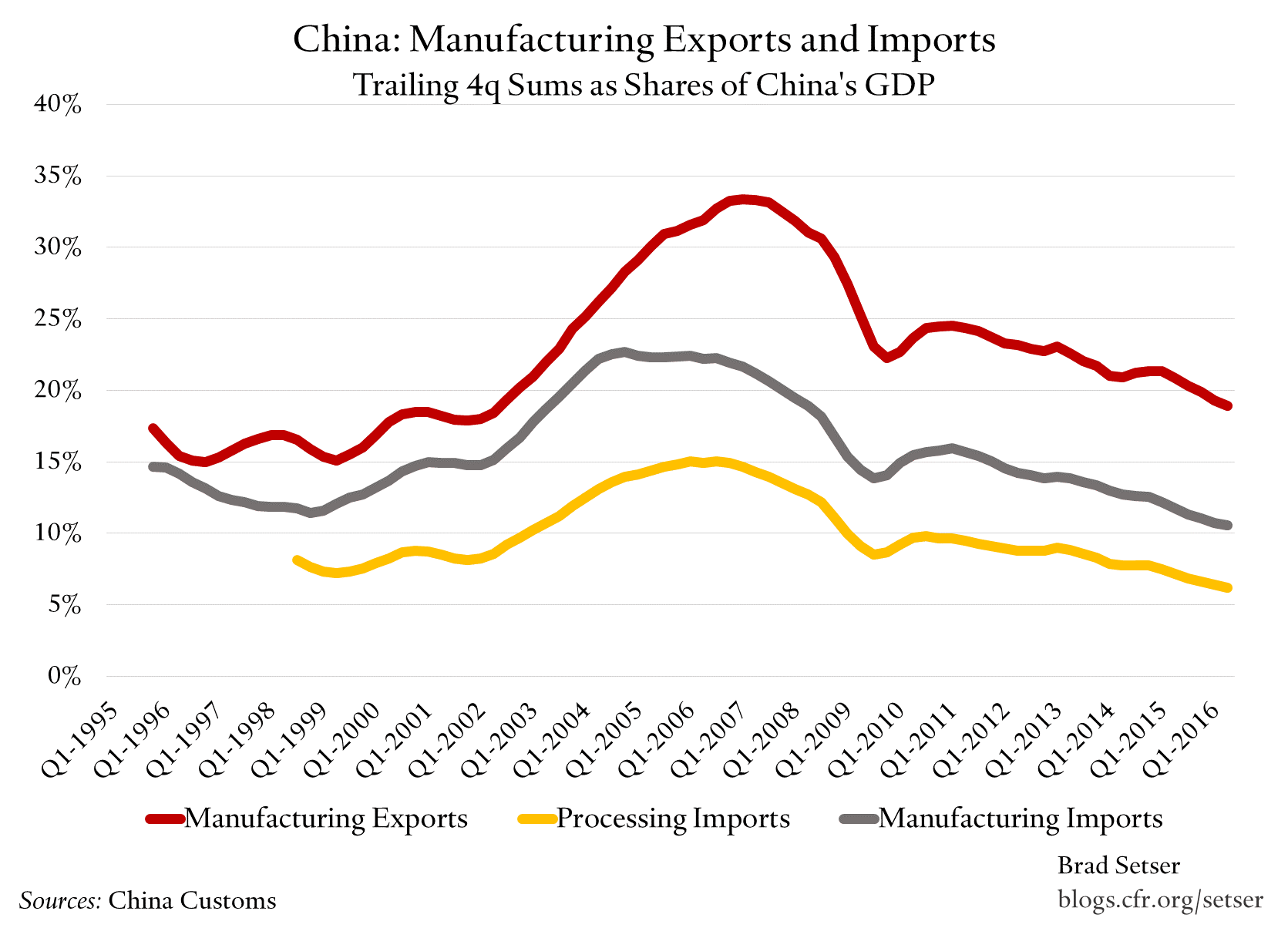 I have long thought that China was too big an economy for manufacturing exports to account for 35 percent of its GDP (35 percent of GDP is much higher than the comparable ratio for the eurozone or the United States), especially when that high level of exports relative to GDP corresponded with a large overall surplus.

An adjustment that returned China to “normal” thus almost certainly would be accompanied by some form of a slowdown in global trade. Conceptually, imports could have risen to match exports. But that always seemed a bit implausible to me, in part because of the Chinese state has long encouraged firms who want to sell in China to produce in China. And concretely, it clearly didn’t happen. China’s post-crisis growth has coincided with fairly steady falls in its imports of manufactures relative to its GDP.

There is plenty of evidence that components once imported are now increasingly made in China (see for example Chapter 1 of this IMF report). Global value chains got compressed; China’s imports from Japan and the NIEs haven’t kept pace with its exports. 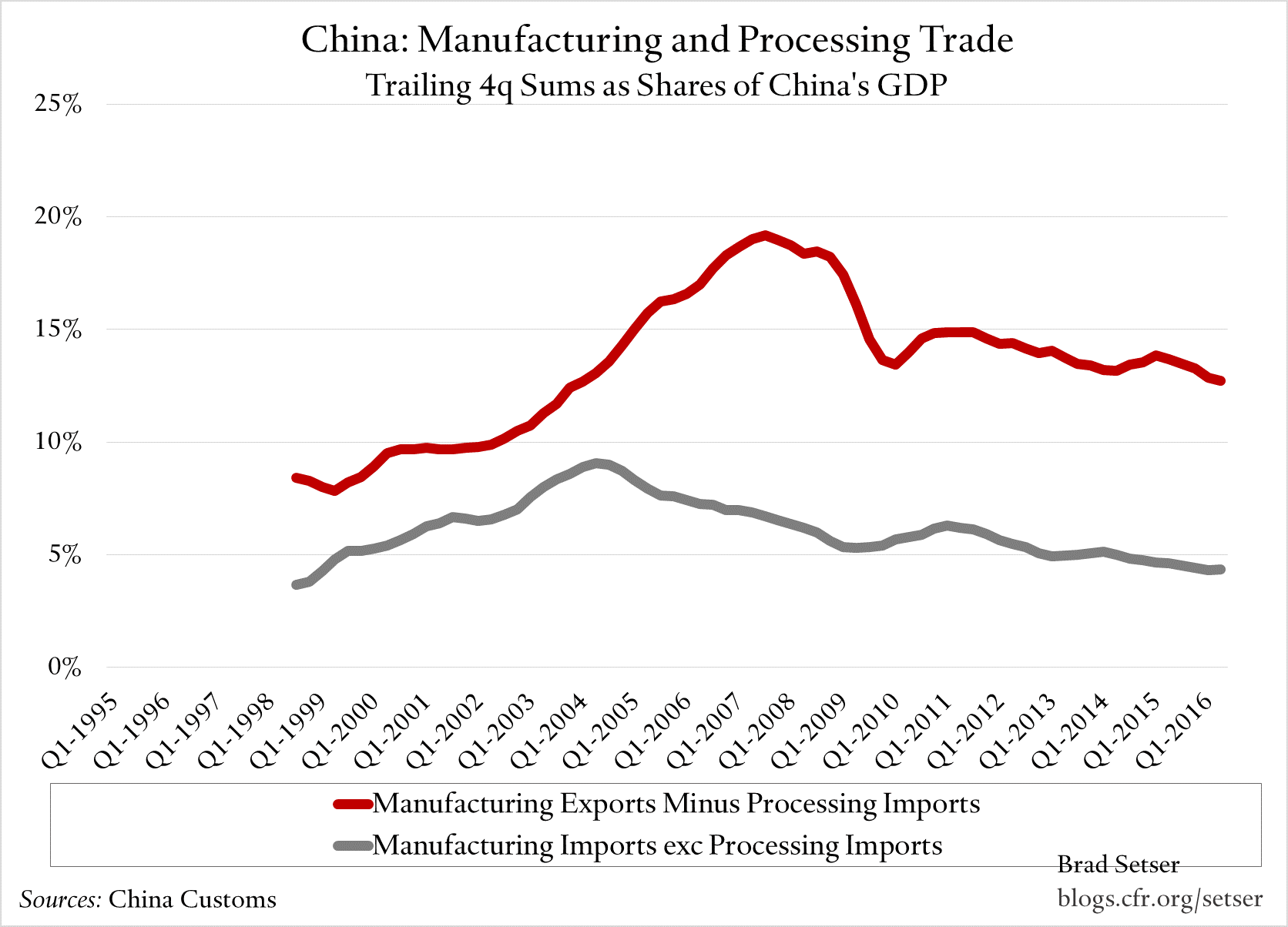 And imports of manufactured goods for domestic use (measured as the difference between processing imports and all manufactured imports) also seem to be sliding. China’s investment slowdown seems to have pulled down China’s overall imports significantly in the past couple of years.

The IMF’s analysis in the new WEO chapter on trade points in a similar direction. The Fund argues that the slowdown in global trade stems mostly from a slowdown in investment. And it seems like the Fund found that China’s imports recently have fallen by a bit faster than can be explained by its model; it diplomatically noted: "China stands out in terms of a rise in trade costs."

Bottom line: a lot of the story on global trade reduces to a China story, both directly, and indirectly though China’s impact on commodities. The ECB’s statistical work maps well to a set of stylized facts about the evolution of China’s trade.