I’ll be unusually brief. I have been working through the latest data on China -- and, well, it is hard to top Calculated Risk.

The fall in the US trade deficit today was easy to anticipate. The average price of imported oil was sure to fall from $92 in October. It came down to $67 a barrel in November. The petrol deficit fell by about $13 billion.

This shows up in clearly in a plot -- prepared by Arpana Pandey -- of real goods imports and exports. In November the down turn in imports was sharper than the downturn in exports. 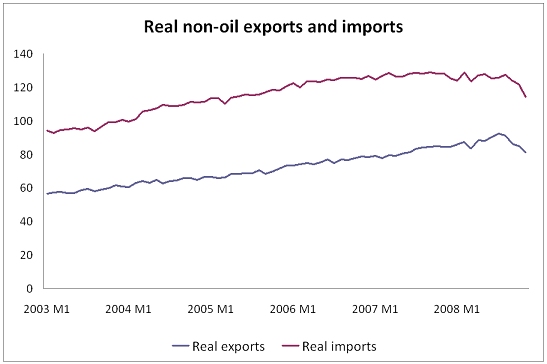 There isn’t anything good in this graph other than the fall in the trade deficit. Falls in exports and imports signal contracting global activity. And I am not even sure that the improvement in the trade balance will continue, as I suspect the combination of a stronger dollar and a broadening global slowdown will eventually have a major impact on exports -- and the US fiscal stimulus will bleed into imports. But the US led the world down and for now, US imports are falling faster than US exports ...

Secrets of SAFE: A sharp slowdown in reserve growth and large “hot” outflows in q4….