A global slowdown -- likely a severe global slowdown -- is now underway. Last week’s data erased any real doubt. US retail sales are down. US real goods exports fell in September, and the October ports data (and woes with trade finance) suggest that hope isn’t on the way. The dollar’s rally also won’t help -- but that will only hit with a lag. Europe is slowing. Britain is slowing far more. And China is too.

Wang Tao of UBS argues -- I suspect correctly -- that the weak data on industrial production stems more from a fall in domestic activity, especially a fall in construction that reduced demand for steel and cement, than from a fall in exports. But if the polls on Americans holiday purchasing plans are accurate, exports are going to fall sharply. And this time it won’t just be the garment and toy factories that feel the pain; some of China’s newer export sectors (the ones that have kept y/y nominal export growth at 20% ... ) will slump too.

It isn’t a pretty picture. But if nothing else it clarifies the need for strong policy action to offset what now looks to be a sharp and quite sudden fall in private demand.

The Fed’s balance sheet isn’t any prettier. Week after week it continues to expand. As jck of Alea notes, the Fed’s leverage ratio puts Goldman Sachs and Morgan Stanley to shame. Of course, the Fed could always get more capital if it needed it. But the rise in the Fed’s leverage illustrates how it has facilitated the deleveraging of other parts of the financial sector. If it hadn’t acted, things could be worse. Really.

And for all the talk of how foreign central banks are intrinsically stabilizing forces in the market, the real heavy lifting has all been done by the Fed (with a bit of help from the Treasury). The world’s reserve managers may have been a stabilizing force in the currency markets in the third quarter -- we will have to see what the IMF’s COFER data tells us (and read the tea leaves to guess what China has been doing; to stabilize the market it should be stepping up its purchases of euros, pounds and Australian dollars ... ). But they clearly haven’t been a stabilizing force in the US credit market. In the first two weeks of November they added over $30 billion to their Treasury holdings at the New York Fed while continuing to scale back their Agency holdings. Paul Swartz of the Council’s Center for Geoeconomic Studies (check out its coverage of the Leaders 20) and I tried to illustrate how the Fed has been taking on credit risk even as other central banks have pulled back. 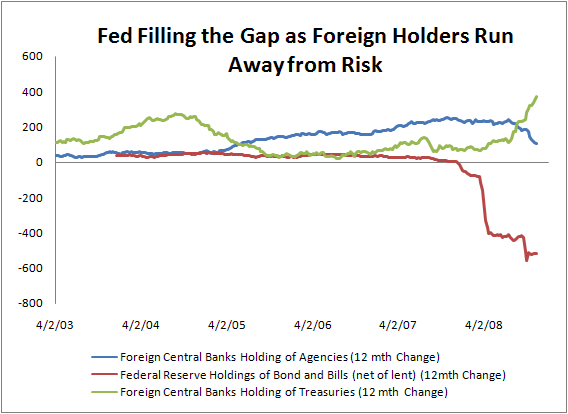 It some sense, the Fed hasn’t just been facilitating the deleveraging of bank balance sheets. It also has facilitated a large and fairly sudden change in the composition of the balance sheets of foreign central banks, who have shifted out of Agencies toward Treasuries. Remember central banks were net sellers of reserves in October, so the recent shift toward Treasuries implies sales of other less secure assets.

Second, we didn’t plot the surge in Treasury issuance associated with the supplementary financing account, i.e. the Treasury bills that have been sold to provide the Fed with additional funds to lend out to the financial sector. We just looked at what happened to the Treasuries that the Fed held a year ago as assets on its balance sheet. The amazing thing is that the Fed in effect needed to sell even more Treasuries that in held on its balance sheet (about $559 billion more) to finance its lending to the global financial system during this crisis.

The Irish Shock to U.S. Manufacturing?