Skip to main content
Foreign central banks aren’t going to finance much of the 2009 US fiscal deficit; their reserves aren’t growing any more (the q4 2008 COFER data)

Those small changes though aren’t the real story. The real story is that global reserve growth -- and thus dollar reserve growth -- has slowed. Look at the following chart. To estimate the stock of dollar reserves, I assumed that the countries that do not report data to the IMF held a constant 65% of their reserves in dollars (this is effectively an assumption about the dollar share of China’s reserves*). And to keep things simple, I didn’t add in the growth in the non-reserve foreign assets of China’s central bank or the growth in non-reserve foreign assets of the Saudi Monetary Agency. This is very easily replicable graph. 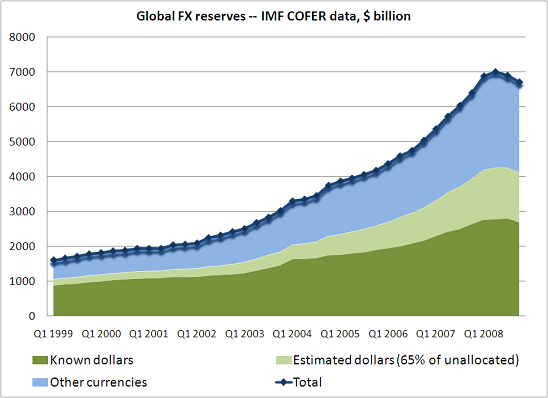 The obvious implication of the recent downturn in total reserve holdings -- and the $180 billion fall in q4 wasn’t driven by currency moves -- is that the pace of growth in the world’s dollar reserves has slowed dramatically. 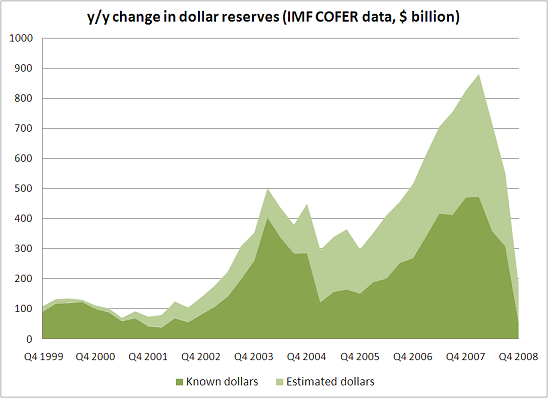 In the fourth quarter, the IMF data shows a $110 billion fall in the dollar holdings of countries that report detailed data to the IMF. That all came from emerging economies -- who had to sell their reserves to finance massive capital outflows. The reserves of the countries that don’t report data to the IMF also fell by $55 billion. They likely reduced their dollar holdings proportionately.

The US data didn’t show comparable sales from central banks. Central bank inflows slowed to a crawl, but the US data doesn’t show large sales. That implies, I think, that the world’s central banks pulled a lot of large dollar deposits from the "eurodollar" market. They weren’t in the mood to take chances after Lehman. Big uninsured deposits were risky. Some of that money -- along with the money that was withdrawn from the agency market -- found its way into Treasuries. 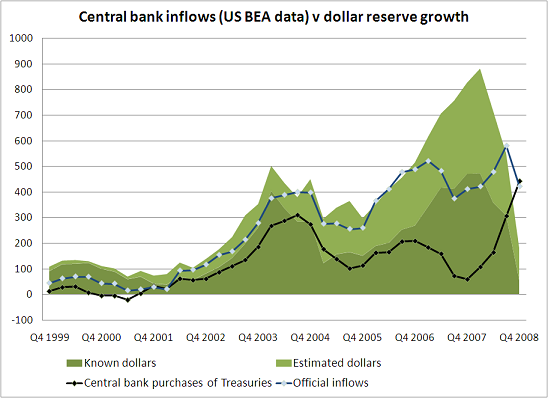 Over time -- setting big shifts in the composition of reserves -- central bank demand for Treasuries tends to track reserve growth.

The obvious implication: most of the 2009 US fiscal deficit will need to be financed domestically. The Fed’s custodial data indicates central banks are still buying Treasuries, though at a somewhat slower pace than in late 2008. But their demand hasn’t kept up with issuance.

That isn’t necessarily a bad thing either. If a large fiscal deficit was driving an expansion of the US current account deficit -- and a rise in say China’s surplus that was being recycled back into the US -- I would worry a lot more about the United States external position than I do now. The US should want the rest of the world to take policy steps to support demand for goods -- not to restrict demand growth, run current account surpluses and have more money available to lend to the US.

Creditors generally do like to lend in their own currency …