1. Net petroleum imports fell by $1.6b. Petroluem exports rose by 0.96b while imports FELL by $0.66b in dollar terms. The fall in imports was a surprise. Oil prices rose by 9.7% or so. But import volumes were down by over 10% from April (and 14% lower than their 2007 average). The good news is that the US is importing significantly less petrol than in the past. The bad news is that the price of imported petrol isn’t going to stay at $106 a barrel.

3. Y/y real goods exports were up close to 10% (9.4%) in May. Real imports were up less than 1% (0.8%). The slowdown in real export growth a few months back hasn’t been confirmed in the recent data. Real exports continue to do well. 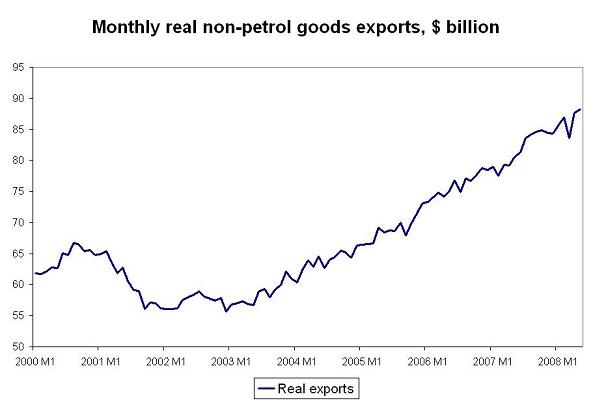 4. The US trade deficit with China is flat so far this yea: $96.0b v $96.3b. Imports from China are only up 4.4% so far this year -- a pace consistent with the overall increase in non-oil imports. The combination of RMB appreciation v the dollar, rising inflation in China, rising transportation costs and a slowing US economy is having an impact. US exports to China are up $5b (comparing the first five months of 2008 to the first five months of 2007); US imports from China are only up $5.4b. The slowdown in the pace of import growth has contributed far more to the stabilization of the trade deficit than the (strong 19.7%) percentage increase in exports. That US still imports about four times as much from China as it exports.

UPDATE: Spencer provides a nice summary of real export and import trends over at Angry Bear.

China’s June exports: still chugging along, despite all the talk to the contrary

Transition 2021 Series: The U.S. Approach to Latin America and the Caribbean