It turns out Germany has fiscal space even by German standards!

Germany’s ongoing fiscal surplus contributes to Germany’s massive current account surplus, and the large and growing external surplus of the eurozone (the eurozone’s surplus reached €350 billion in the last four quarters of data, which now includes q2). The external surplus effectively exports Europe’s demand shortfall to the rest of the world, and puts downward pressure on global interest rates. Cue my usual links to papers warning about the risk of exporting secular stagnation. 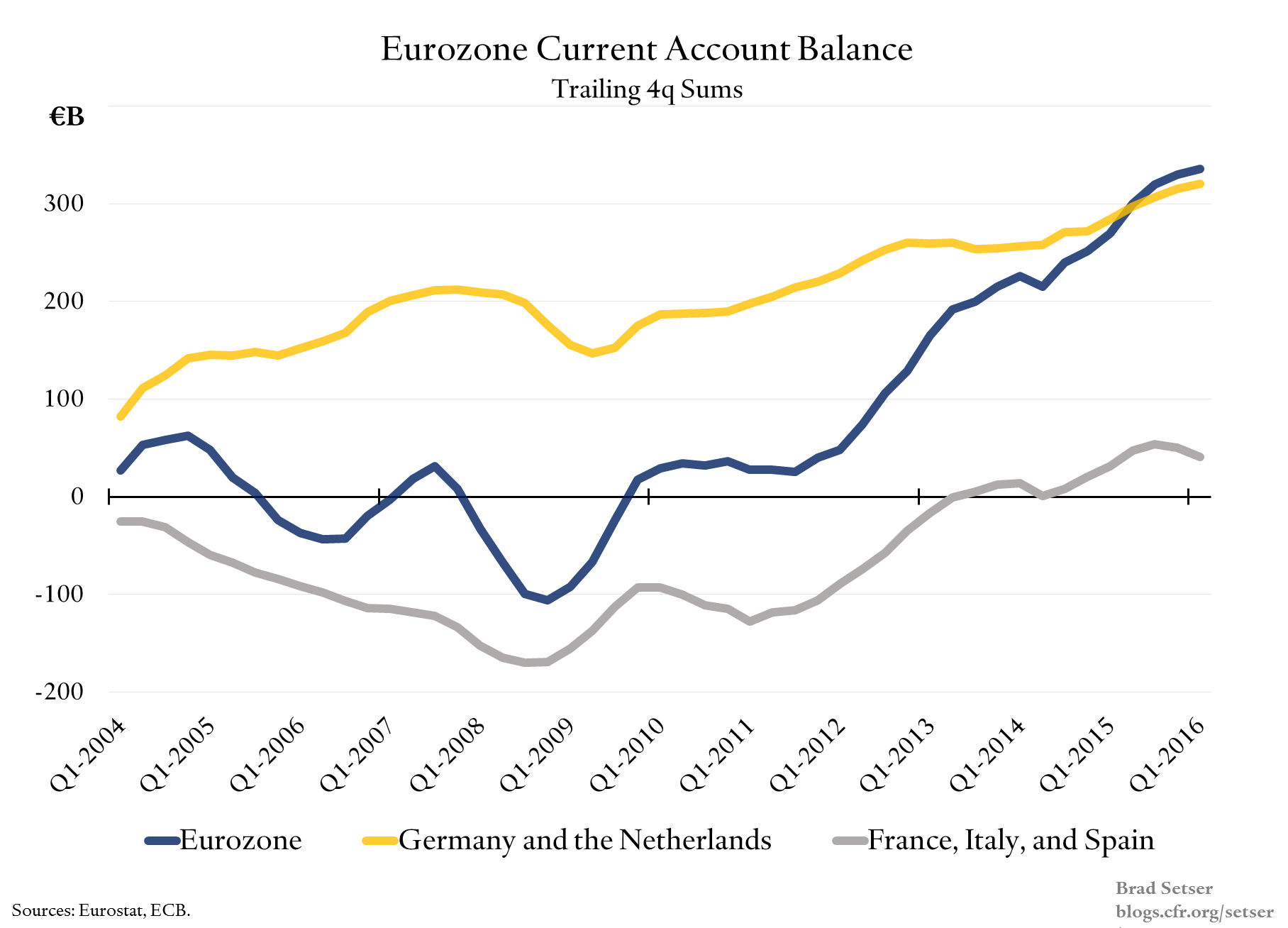 Martin Sandbu of the Financial Times puts it well.

"The government’s surplus adds to the larger private sector surplus which means the nation as a whole consumes much less than it produces, sending the excess abroad in return for increasing financial claims on the rest of the world. German policymakers like to say that the country’s enormous trade surplus is a result of economic fundamentals, not policy—but as far as the budget goes, that claim is untenable. Even if much of the external surplus were beyond the ability of policy to influence, that would be a case to use the government budget to counteract it, not reinforce it."

The Germans tend to see it differently. Rather than viewing budget surpluses as a beggar-thy-neighbor restraint on demand, they believe their fiscal prudence sets a good example for their neighbors.

But its neighbors need German demand for their goods and services far more than they need Germany to set an example of fiscal prudence. It is clear—given the risk of a debt-deflation trap in Germany’s eurozone partners—that successful adjustment in the eurozone can only come if German prices and wages rise faster than prices and wages in the rest of the eurozone. The alternative mechanism of adjustment—falling wages and prices in the rest of the eurozone—won’t work.

German fiscal expansion, especially if channeled to public investment that spurs private investment and spills over the rest of the eurozone, thus would help others achieve their fiscal goals. Stronger demand in Germany would raise exports, pulling up output and tax revenues. See this 2014 IMF working paper.

If nothing else, Germany’s 2016 surplus allows the IMF to easily recalibrate its 2017 fiscal recommendation for the eurozone. It looks like the German fiscal expansion that the IMF initially projected for 2016 didn’t happen (the IMF projected a half point increase in government spending relative to GDP and a 20 basis points fall in revenue relative to GDP in 2016). Which makes it easy for the IMF to call for an expansion that brings the surplus down to zero in 2017, and in the process helps to offset the negative fiscal impulse likely to come from Spain and others. The IMF is still reluctant to call for external surplus countries to run (modest) budget deficits. But it has been willing to call for countries with external surpluses and budget surpluses to bring their budgets back to balance.

* The general government balance captures spending by the regional governments, it provides a broader measure of Germany’s fiscal stance than the federal budget.