Anna Feuer and Helia Ighani are research associates in the Center for Preventive Action at the Council on Foreign Relations.

The Syrian civil war highlights some of the most challenging features of contemporary conflict that stymie prevention and mitigation efforts. Although the war has been fought primarily within Syria’s borders, the violence has spilled into neighboring states, aggravated longstanding sectarian tensions in the region, and magnified rivalries between major powers. As Middle East sources of instability and violence are increasingly interconnected, the means of “unlocking” this dense conflict complex become more obscure.

The Syrian conflict is one of thirty crises identified by the Center for Preventive Action’s annual Preventive Priorities Survey. The annual survey assesses ongoing and emerging sources of conflict and suggests how the United States should focus its prevention efforts. The results of this year’s survey reflect four ongoing challenges for policymakers concerned with preventing large-scale violence and instability.

1) Most crises assessed to intensify in 2014 are intrastate conflicts. Nearly two-thirds of the thirty conflicts identified by our survey have occurred or may erupt internally. This finding is consistent with larger trends that see a rise in intrastate and a decline in interstate conflicts since 1945. Despite efforts to strengthen early warning systems, and peacekeeping and peacebuilding operations, existing multilateral instruments for preventing and responding to civil conflicts remain deficient: recurrences of earlier intrastate violence comprise almost 80 percent of conflict outbreaks.

However, few intrastate conflicts are fought by internal actors alone. Many have spillover effects on neighboring countries and involve outside actors. The conflict in Syria, often described as a civil war, is largely fuelled by the involvement of the United States, Russia, Iran, Saudi Arabia, Jordan, and Turkey. Likewise, the violent insurgency in the eastern Democratic Republic of Congo has long relied on support from the governments of Rwanda and Uganda.

2) Several top-tier conflicts, particularly those in the Middle East and South Asia, may be framed as proxy wars involving external funders and rooted in historical conflicts. The rivalry between Saudi Arabia and Iran is visible throughout the Middle East but has erupted in Syria: while the Saudis fund Sunni-allied groups and fighters, the Iranians continue to prop up Bashar al-Assad’s Alawite (Shia) Syrian regime. Other Gulf states—Qatar, Kuwait, and United Arab Emirates—are also involved in regional conflicts, as evidenced by their generous financial contributions to Egypt and Syria. Additionally, competition between India and Pakistan for influence in Kabul could exacerbate instability in Afghanistan following the drawdown of U.S. troops.

3) Many of the conflicts identified in the survey are interconnected, making them increasingly complex and difficult to address individually. Our survey’s accompanying interactive map, the Global Conflict Tracker, reveals regional clusters of instability and violence, or what some have referred to in other contexts as “regional conflict complexes.” 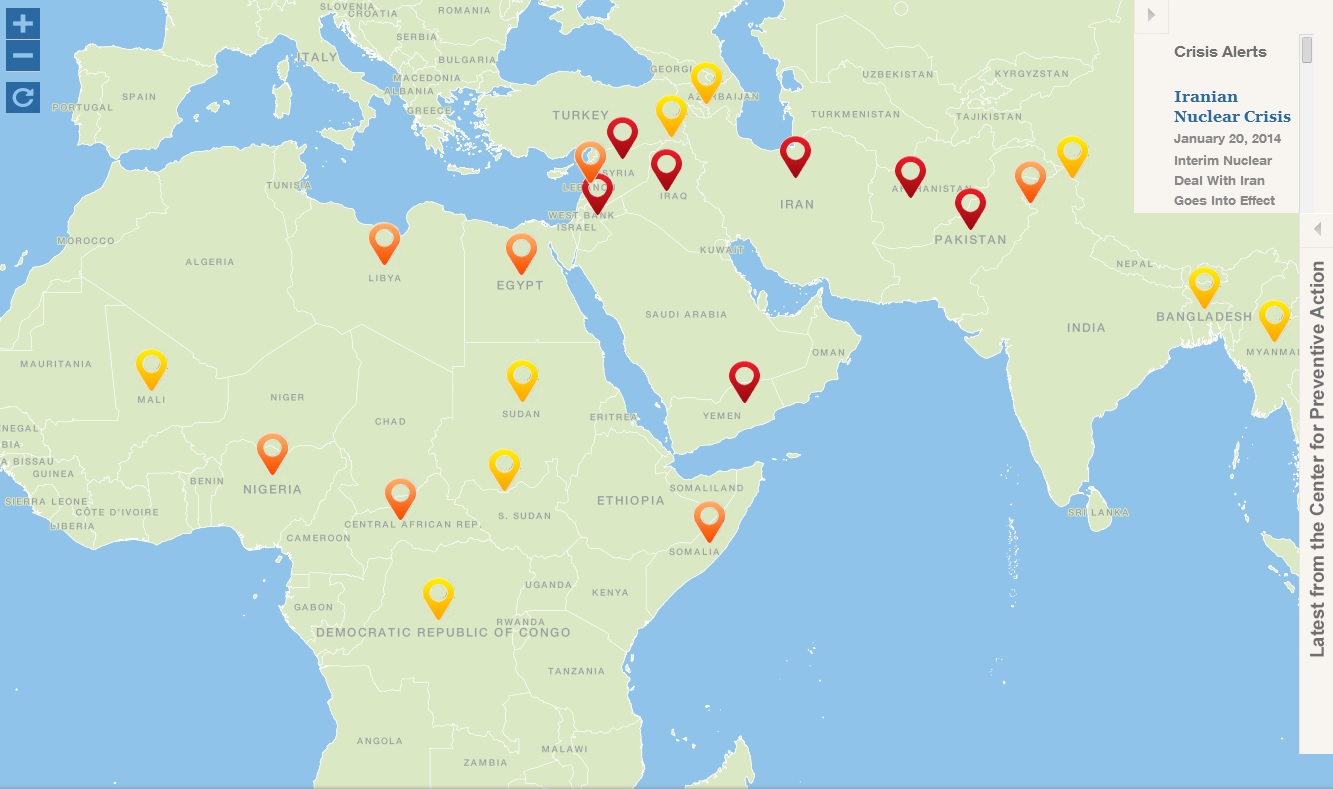 A prime example is the cluster of crises unfolding in Syria, Jordan, Lebanon, Iraq, and Kurdish-dominated areas. These are linked by transnational Sunni-Shia rivalries and cross-border terrorist networks such as Hezbollah and al-Qaeda affiliates. Arguably, other notable regional conflict complexes encompass Iran, Afghanistan, India, and Pakistan, as well as North Korea, South Korea, China, and Japan.

4) Most crises take place in areas with weak regional organizations that have limited capacities to prevent and manage conflict. This makes it much harder for the United Nations and other major external actors to build effective coalitions and generate legitimacy for their actions that the imprimatur of a regional organization can provide. CPA’s Paul Stares and Micah Zenko suggest how the United States can develop and leverage the resources of regional and multilateral institutions to maximize peacemaking efforts around the world and reinforce international norms in a CFR report, Partners in Preventive Action.

This year will present unforeseen challenges and crises for which U.S. and international policymakers will need to develop comprehensive responses and new strategies. The Global Conflict Tracker can help policymakers in their efforts to predict and prepare for violent conflict by identifying and monitoring these global hot spots.

Guest Post: Diplomatic Pressure in Bosnia, But Nothing More