Skip to main content
How Many Reserves Does Turkey Need? Some Thoughts on the IMF’s Reserve Metric

Turkey has long ranked at the top of most lists of financially vulnerable emerging economies, at least lists based on conventional vulnerability measures. Thanks to its combination of a large current account deficit and modest foreign exchange reserves, Turkey has many of the vulnerabilities that gave rise to 1990s-style emerging market crises. Turkey’s external funding need—counting external debts that need to be rolled over—is about 25 percent of GDP, largely because Turkey’s banks have a sizable stock of short-term external debt.

At the same time, these vulnerabilities are not new. Turkey has long reminded us that underlying vulnerability doesn’t equal a crisis. For whatever reason, the short-term external debts of Turkey’s banks have tended to be rolled over during times of stress.*

And, fortunately, those vulnerabilities have even come down just a bit over the last year or so. After the taper tantrum, Turkey’s banks even have been able to term out some of their external funding by issuing bonds to a yield-starved world in 2014, and by shifting toward slightly longer-term cross-border bank lending in 2015 and 2016 (See figure 4 on pg. 35 of the IMF’s April 2016 Article IV Consultation with Turkey) And while the recent fall in Turkey’s tourism revenue doesn’t look good, Turkey also is a large oil and gas importer. Its external deficit looks significantly better now than it did when oil was above a hundred and Russian gas was more expensive. 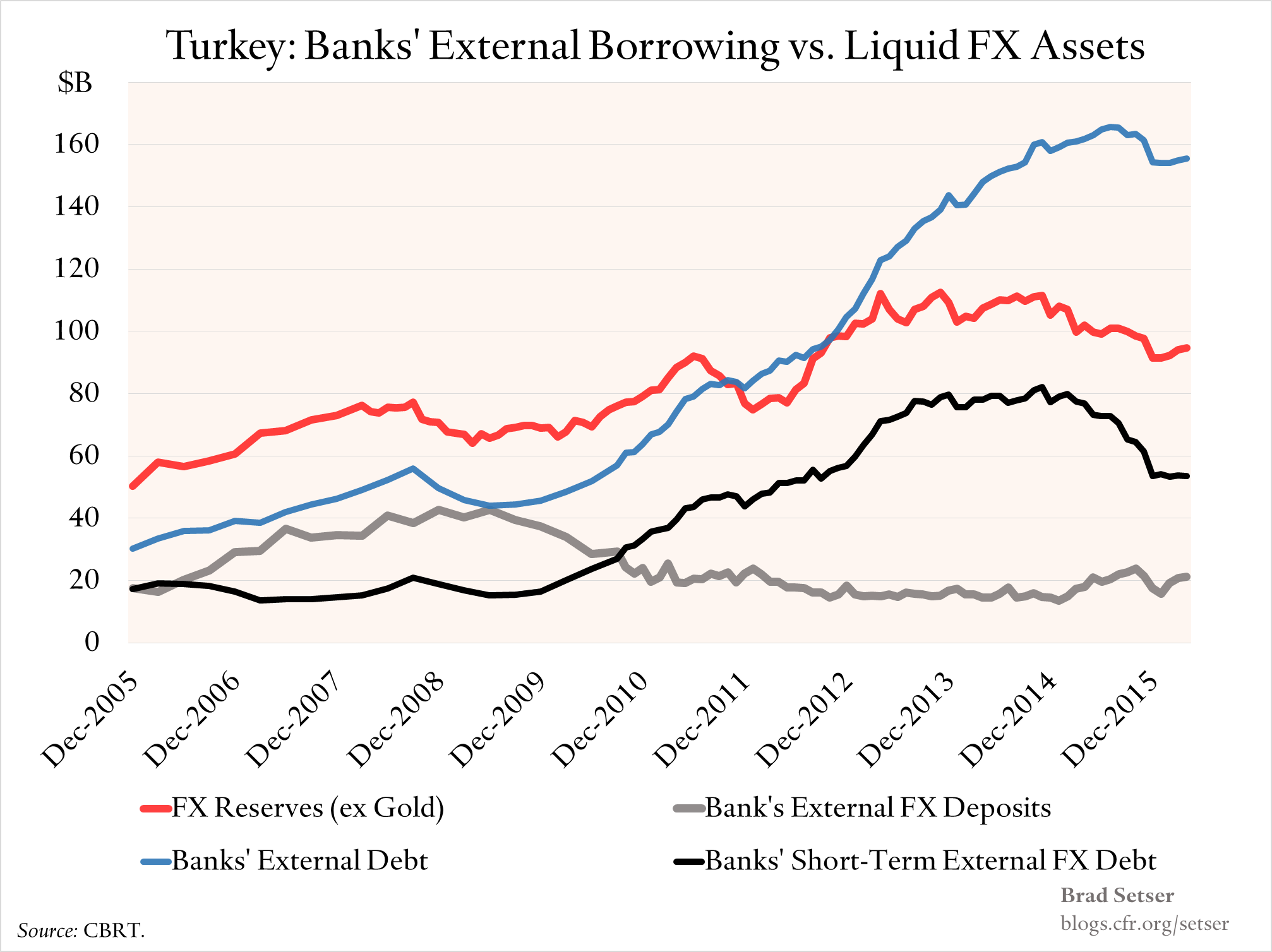 Turkey doesn’t have many obvious fiscal vulnerabilities; public debt is only about 30 percent of GDP. Its vulnerabilities come from the foreign currency borrowing of its banks and firms.

There is one more strange thing about Turkey. Its banks have increased their borrowing from abroad in foreign currency after the global financial crisis, but there hasn’t been comparable growth in domestic foreign currency lending. Rather, the rapid growth has come in lending in Turkish lira, especially to households.

So the banks appear to have borrowed abroad and in foreign currency to fund domestic lending in Turkish lira.

Bear with me a bit. Balance sheet analysis is interesting but not always straightforward.

Why then do the Turkish banks borrow in foreign currency abroad, when, on net, they seem to just park the proceeds at the central bank?

Turkey’s banks rely on two bits of financial alchemy. First, the central bank allows the domestic banks to meet much of their reserve requirement (including the reserve requirement on lira deposits) by posting gold and foreign currency at the central bank (this is the famous or infamous reserve option mechanism). That frees up lira to lend domestically.*** And second, the banks clearly rely on “off balance sheet” hedges (cross currency swaps) for a part of their funding. Look at the financial sector section of IMF’s staff report on pp. 23 to 26.

The result is an interesting mix of risks. The banks ultimately need wholesale funding in lira, which Turkey’s central bank could supply in extremis—though with consequences for the exchange rate. The banks could also offset a loss of external foreign currency funding by drawing down on their liquid foreign currency assets. Monday’s Central Bank of Turkey (CBRT) press release notes that nearly $50 billion in liquidity sits at the central bank. But if the banks ever needed to draw on their foreign currency reserves, Turkey’s headline reserves would fall fast. A lot of Turkey’s foreign exchange reserves—which are not high to begin with—are effectively borrowed from Turkey’s banks.

Makes for an interesting case. And it highlights a second debate of particular interest to me.

This isn’t entirely an academic debate.

The IMF’s new reserve metric—a composite indicator that is a weighted average of reserves to short-term external debt, reserves to all external liablities, reserves to exports, and reserves to domestic bank liabilities (M2)—effectively says that countries with large banking systems (like China) need to hold more reserves against the risk of capital flight than countries with heavily liability dollarized banks (like Turkey).

And to get all wonky, this is because of the weight the IMF’s reserve index puts on the “M2” variable and the IMF’s decision to omit “foreign currency deposits” from its metric. There turns out to be large variance in the ratio of M2 to GDP across large emerging economies And for those countries, high levels of M2 to GDP are not, in general, correlated with high levels of liability dollarization, while a high level of M2 to GDP, it turns out, is correlated with a current account surplus.

As a result, the M2 (broad money) variable drives much of the variation in the amount of reserves that large emerging economies need to hold to meet the IMF’s reserve norm. the following table, prepared by the CFR’s Emma Smith, decomposes reserve needs at the end of 2015. The IMF also has a somewhat cumbersome reserves data tool here. 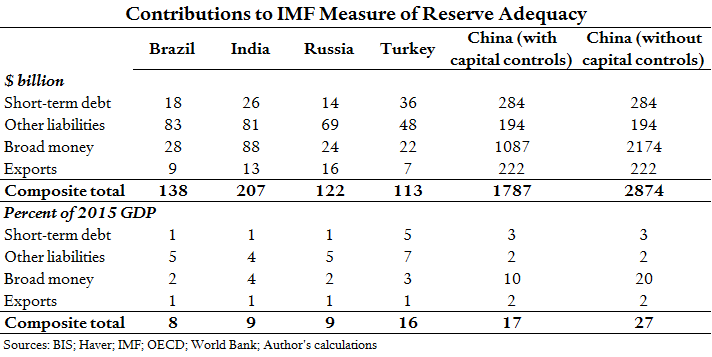 For countries with high levels of short-term debt and a low level of M2 to GDP, the IMF composite metric can have the effect of reducing the reserves that they need to hold relative to simple measures like reserves to short-term-debt.

For example, in December 2015, when Turkey had a bit more short-term debt ($120 billion, by residual maturity) than it does now, the IMF’s metric would have been met with slightly fewer reserves ($115 billion) than Turkey’s short-term external debt.

Conversely, for countries with low levels of short-term debt and a high levels of M2 to GDP, the IMF’s metric has the effect of raising needed reserves well above measures based on short-term external debt. China is the most obvious example, but not the only one.

And I find it a bit strange that with the IMF’s metric China—even with a relatively closed financial account—needs substantially more reserves, relative to the size of its economy, than say Brazil or Russia. Brazil runs a current account deficit and Russia has significant domestic liability dollarization.****

The IMF argues—in its staff guidance note on the reserve metric—that there is no additional risk from high levels of liability dollarization. They didn’t find evidence of more or bigger runs in economies with dollarized liabilities. I am not sure I agree with their interpretation of the data on runs—I remember Uruguay’s crisis, and Ukraine lost substantially more reserves over the past few years than the IMF initially forecast in part because of a draw-down in its domestic foreign currency deposits.*****

Technical stuff. But important. It has a big impact on who needs to hold what.

* The standard explanation is that some of the funding comes from wealthy Turks with funds offshore. I though wonder if that is still the case given the magnitude of the banks’ external liabilities.

** Turkish firms have increased their foreign currency borrowing from the domestic banks from $50 billion in 2008 to around $180 billion now; the Turkish central bank helpfully provides all the data on this here. The resulting risks are well known.

**** See the peer comparison on p 38 of the IMF’s staff report for Turkey, among other sources.

****** I tend to compare foreign currency debts to foreign exchange reserves—leaving out gold reserves. I followed that convention in the chart above. I am reconsidering a bit, given Venezuela’s apparent ability to borrow against its gold. But in Turkey’s case, I suspect most of its $20 billion or so in gold is likely borrowed from the banks (through the reserve option mechanism), and thus not really available to meet a foreign currency liquidity need.