Global trade has not grown since the start of 2015.

Emerging market imports appear to be running somewhat below their 2014 levels.

But for now the underlying national data points to much more prosaic explanation.

And sharp falls in commodity prices in turn radically reduced the export revenues of many commodity-exporting emerging economies. For many, a fall in export revenue meant a fall in their ability to pay for imports (and fairly significant recessions). For the oil exporters obviously, but also for iron exporters like Brazil.

Consider a plot of real imports of six major world economies: Brazil, China, India, Russia, the eurozone and the United States, indexed to 2012. The underlying data isn’t totally comparable. I used seasonally adjusted real goods and services imports from the National Income and Product Accounts (NIPA) data for Brazil, India, Russia and the eurozone. For China I used an index of import volumes, and smoothed it by taking a four quarter average (necessary, alas as the seasonality overwhelms the trend, even though it doesn’t make the data for China fully comparable with the data for the others countries). And for the United States I wanted to take out oil imports, and the easiest way to do that is to look at real non-petrol goods imports. 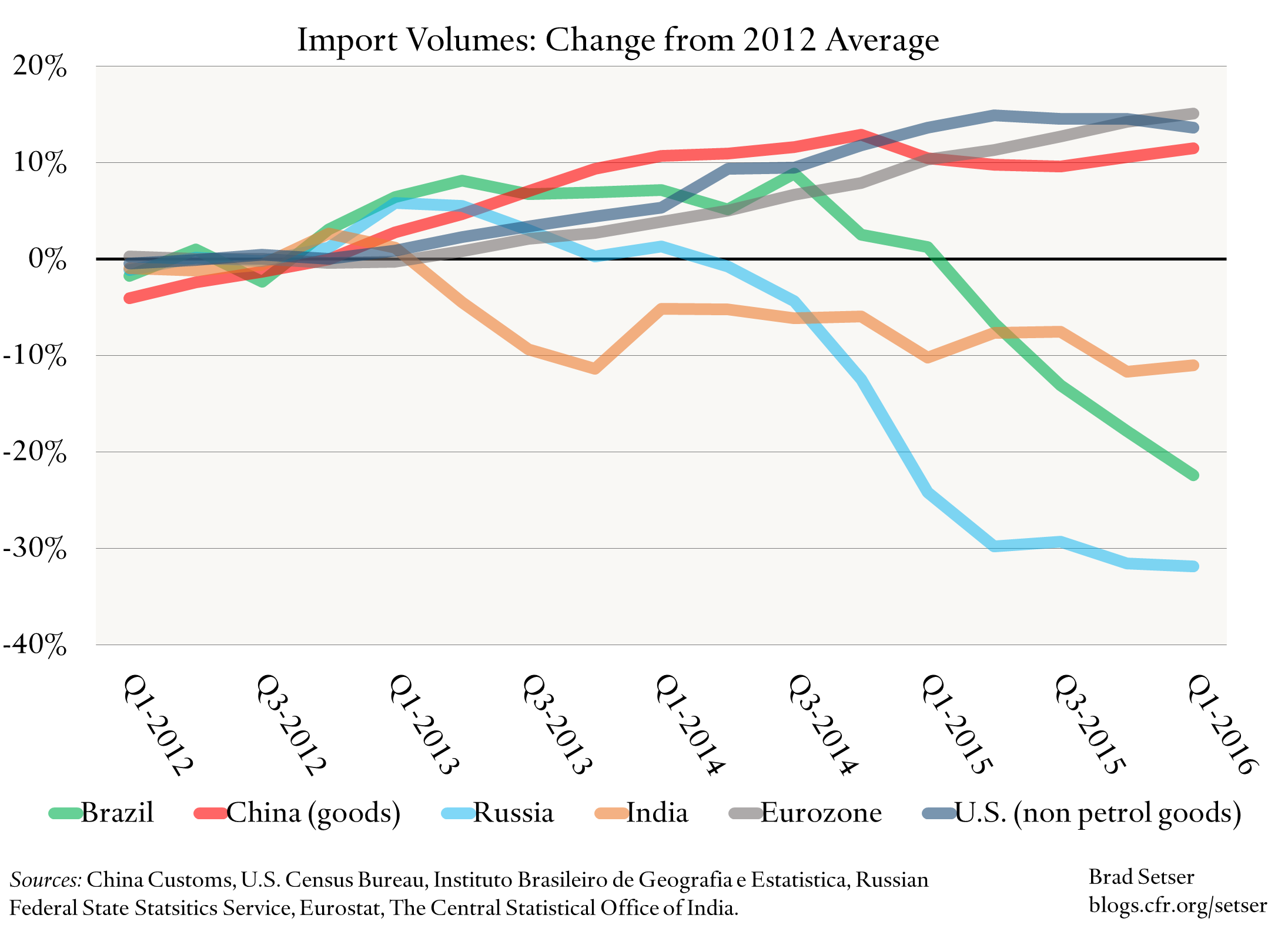 I see five things in this data:

(1) The 20-30 percent fall in Brazilian and Russian imports from their 2012 levels, which rather obviously is mostly tied to changes in their terms of trade. Brazil and Russia are fairly large economies, and these are giant falls.

(2) An adjustment in India that followed the now almost forgotten taper tantrum (I didn’t adjust for gold imports).

(3) A slowdown in import growth in China that started in 2014 and was quite pronounced in 2015. And more generally, relatively slow growth in import volumes relative to China’s reported GDP growth. Pick your favorite explanation. The most obvious is that the most import-intensive parts of the Chinese economy have slowed the most. The imported content of domestic consumption is low. And China is producing more and more electronic components. Manufactured imports have been trending down relative to China’s GDP for some time.

(4) Decent import volume growth, rather surprisingly, from the eurozone. Admittedly, this is a recovery from a really low base. But the slow recovery in the eurozone that took hold a few years ago has flowed through to demand for the goods of the rest of the world.

(5) Decent import growth in the United States until 2015 if you remove the impact of the tight oil revolution. Rising U.S. oil production from 2012 to 2015 obviously led to a reduction in oil import volumes, which is natural if there a big increase in supply in one of the world’s largest importers. And over the last several quarters, U.S. import growth, rather mysteriously, has slowed. The best explanation I think is that weakness in investment feeds through more strongly into imports than ongoing growth in domestic consumption, but I concede the weakness in imports in the face of dollar strength is a bit of a mystery.