Abe’s rhetoric has not been German. Especially not recently.

But his policies over the last two years have been. At least until recently.

The International Monetary Fund’s fiscal department estimates that Japan did a consolidation of over 2 percentage points in 2014 and another half point or so of fiscal consolidation in 2015, net of any gains from lower interest payments.*

Postponing the consumption tax hike consequently makes a great deal of sense. Japan’s economy—the domestic side at least—never recovered from the last hike. 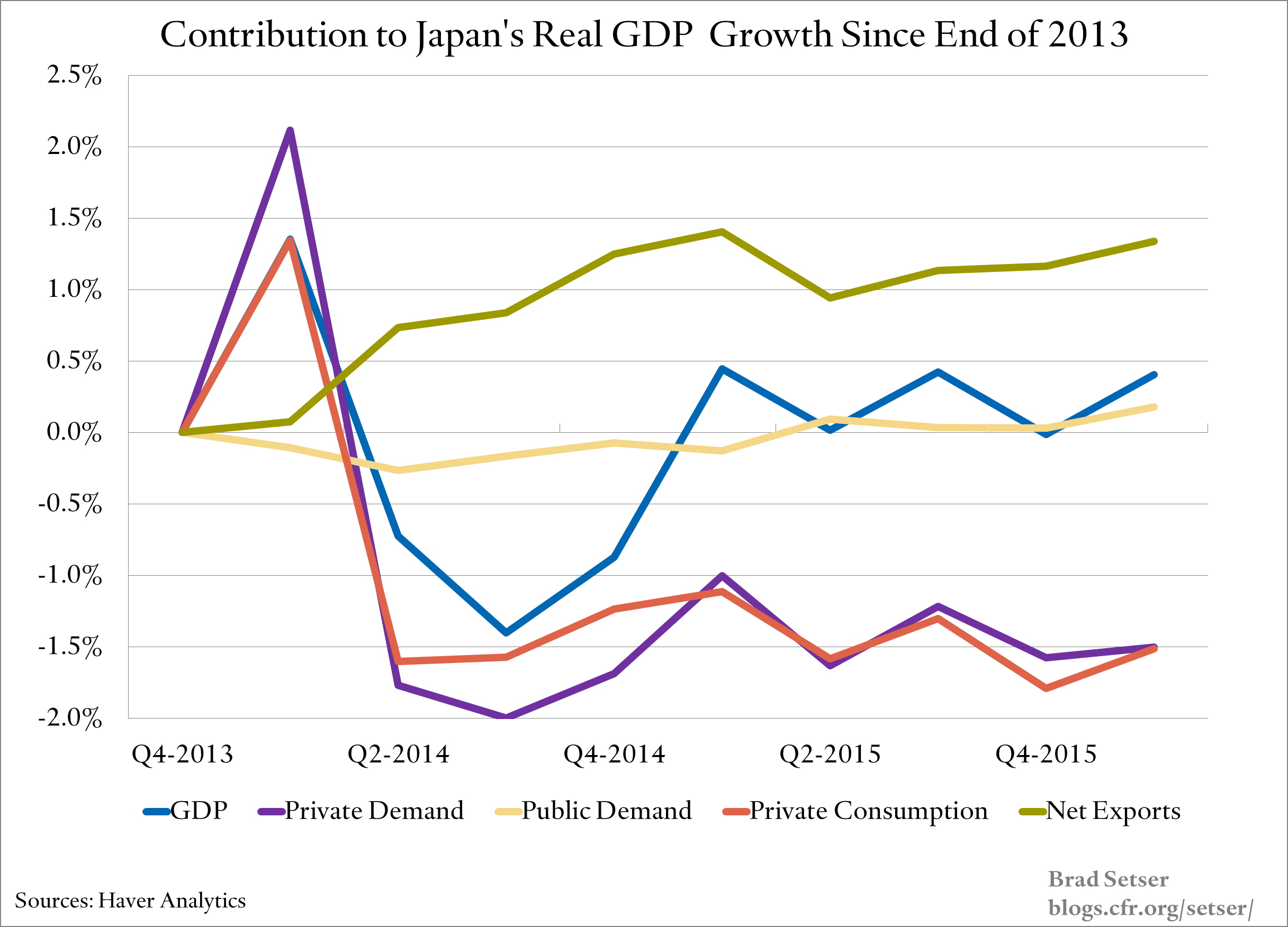 Private consumption demand fell around 1.5 percentage points of GDP immediately after the consumption tax hike, and hasn’t recovered. Annualizing quarter-over-quarter changes in the level of consumption produces noisy headlines every quarter—but the basic trend is clear by now. Even in Japan with its demographics there should be an upward slope to consumption over time in a normally performing economy.

Japan’s 2014 consumption tax hike consequently should rank a bit higher in the various cases used to examine the impact of fiscal austerity.

There was a clear swing toward austerity, and thus a clear contrast. Fiscal policy was modestly expansionary by any measure in 2013.

The tax hike came at the zero bound, so there was limited capacity to offset using conventional monetary policy tools.

That is precisely the circumstance when macroeconomic theory would suggest that a broad based tax hike would harm growth.

But the large drag was not necessarily what many forecast at the time.

Japan’s cabinet office forecast growth of 1.4 percent in fiscal 2014 (2nd quarter of 2014 through the first quarter of 2015), with a percentage point contribution from private demand. Private consumption was expected to contribute about 40 basis points to growth. The cabinet office was not alone.

The IMF’s 2014 Article IV report forecast growth of about 1.5 percent in calendar 2014, almost all from domestic demand. At the time, the IMF was more concerned that Japan wasn’t doing enough medium-term consolidation than that Japan was underestimating the near-term fiscal drag.

The rise in the consumption tax is correlated with a broader loss of momentum in Japan’s effort to end deflation as well.

This is precisely what would be expected if the capacity of monetary policy to offset the drag on domestic demand from fiscal consolidation is limited when rate are already close to zero across the curve.

And perhaps all the more to be expected in an economy where excess savings are almost all on the corporate side, not the household side, and where real wage growth and thus private demand growth has been weak for a long time.

** Fiscal year 2014 versus fiscal year 2013 magnifies the fall in output, as the highly telegraphed consumption hike tax pulled consumption forward. But overall path of consumption subsequent to the hike clearly has been at odds with forecasts at the time, and with the multipliers implied in papers arguing for consumption tax based consolidation.

What Exactly is in the New Agreement Between Puerto Rico's Board and its Creditors?