China never was going to transition from one of the most heavily managed currencies in the world to a free float overnight. The critical question always has been how China is going to manage its currency, not whether China will manage its currency. The “market” in China has effectively been a bet on where the People’s Bank of China (PBOC)—and its various masters—wanted the currency to go. The reform last August did not change that.

And China made its task more difficult last August by trying to get rid of one of its tools for managing market expectations—the daily fix of the level for yuan against the dollar, which in theory, though rarely in practice, sets the yuan’s daily trading band—precisely when it moved to destabilize market expectations. Both the spot (the “market” price for China’s currency) and the fix (the PBOC’s reference rate) had been remarkably stable in the three to four months prior to China’s August currency reform. Depreciating the fix to the weaker spot price sent a signal, even if the actual initial move was rather small. In a different world, it would be interesting to game out what might have happened had China guided the spot up toward the fix first. Signals matter. 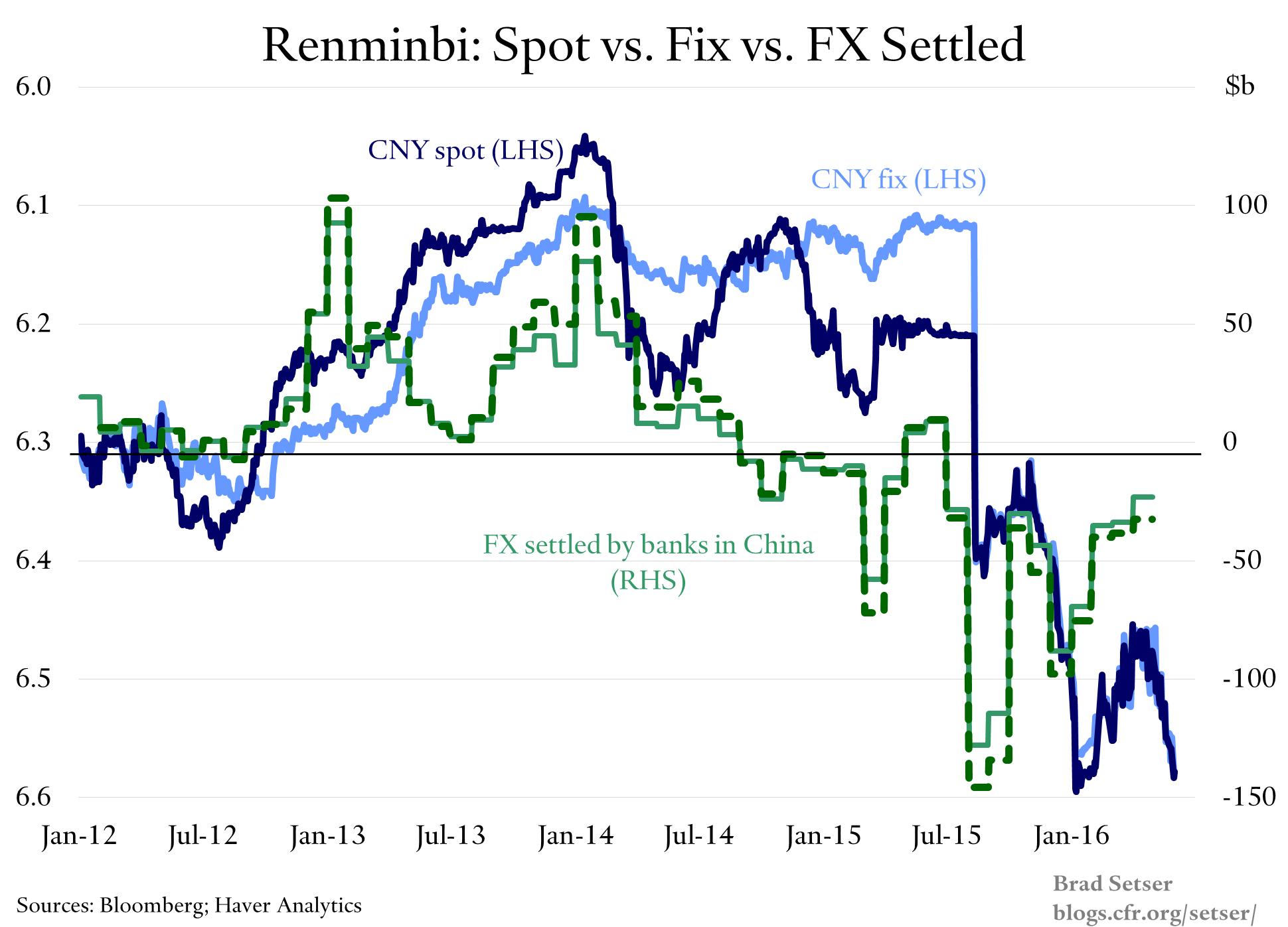 OK, glad I got that off my chest.

Last week’s well-sourced Wall Street Journal story on the PBOC was interesting to me for its information on the domestic politics of the Chinese currency, not for the news that China’s currency is "back under tight government control." For those who like stories on China’s internal currency politics, I suspect it is up there with the Reuters story from last August highlighting the political pressures on the PBOC.

And it raises one of the most critical ongoing questions in the global economy: what has driven large-scale Chinese reserve sales?

There are two theories.

One is that money is leaving China because of losses in the Chinese banking system. According to this argument, it is rational for Chinese savers to flee hidden losses in Chinese banks, even as China is running a record merchandise trade surplus.

The other is that money is leaving China because Chinese savers—and more importantly, Chinese firms, who can use China’s large cross-border trade to move funds in and out of China more easily than most—began to expect that Chinese policymakers wanted China’s currency to weaken.* That some of these firms had built up sizeable foreign currency debts prior to last August only meant that they had a particular incentive to hedge in anticipation of any major currency move.

Put differently, one theory argues that depreciation pressure is mostly a response to an underlying desire by Chinese savers to move funds out of China, a desire that had been repressed prior to financial account liberalization.

The other argues that capital outflows—or to be precise, capital outflows in excess of China’s quite large trade surplus—are mostly a function of the expectation that Chinese authorities want a weaker yuan to support exports during a time of domestic weakness.

The available data to my mind suggests that outflows in excess of the trade surplus stem more from expectations of a currency depreciation than expectations that depositors rather than taxpayers will be forced to recapitalize China’s banks. Consider the earlier plot, prepared by the CFR’s Emma Smith, of changes in the yuan against the dollar * and the balance of foreign exchange (FX) settlement with the banking system. The settlement data aggregates the central bank and the banking system, but it is clear that over time the central bank is the main actor. And as a result it is one of the best proxies for actual intervention by the central bank.**

There is a pretty clear pattern. Depreciation induces more sales (and, in the past, appreciation induced more purchases). Stability generally means fewer sales. That is consistent with the argument that outflows—or rather outflows larger than can be financed out of the large merchandise trade surplus—are a response to expectations of future depreciation.

Stories about the huge scale of outflows from China are accurate. China’s swing from massive purchases to massive sales dominates other changes in global capital flows.

But I would argue that these stories often miss the fact that the pace of monthly outflows has not at all been constant. A huge share of China’s reserve sales actually came in four months—months when the currency was depreciating against both the dollar—and against a currency basket. 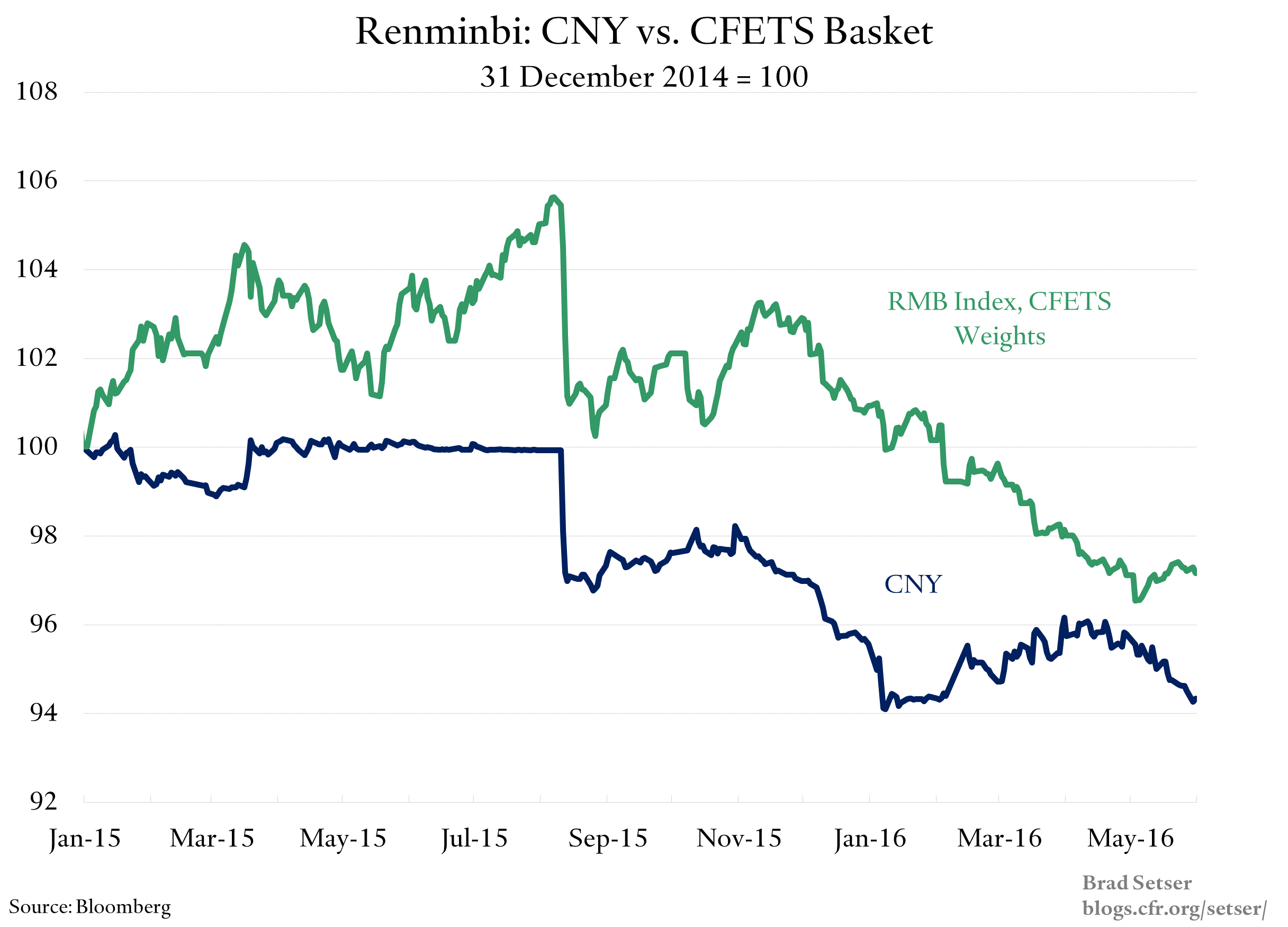 ** For the currency intervention geeks, there are a number of indicators that provide a guide to China’s reserve sales, and the FX settlement data is among the best. The indicator that tends to attract the most attention—changes in total (“headline”) foreign currency reserves—is actually one of the least reliable indicators of true pressure on China’s currency regime. It leaves out the actions of the state banks, and month over month changes are heavily influenced by valuation changes from moves in the euro against the dollar.

*** More throat clearing. I have no doubt that the unrealized losses inside China’s banking system are large. They also could be borne by China’s taxpayers, not by depositors. The logic of a run on the currency hinges in a large part on the assumption that Chinese taxpayers will not absorb the cost associated with the current round of bank recapitalization. I am among those who think that China’s failure to recapitalize its banks prior to liberalizing its financial account was enormously risky.