The best available indicators of China’s activity in the foreign exchange market—the People’s Bank of China’s (PBOC) balance sheet data, and the State Administration of Foreign Exchange’s (SAFE) foreign exchange settlement data—are out. They have confirmed that China did not sell much foreign currency in May. 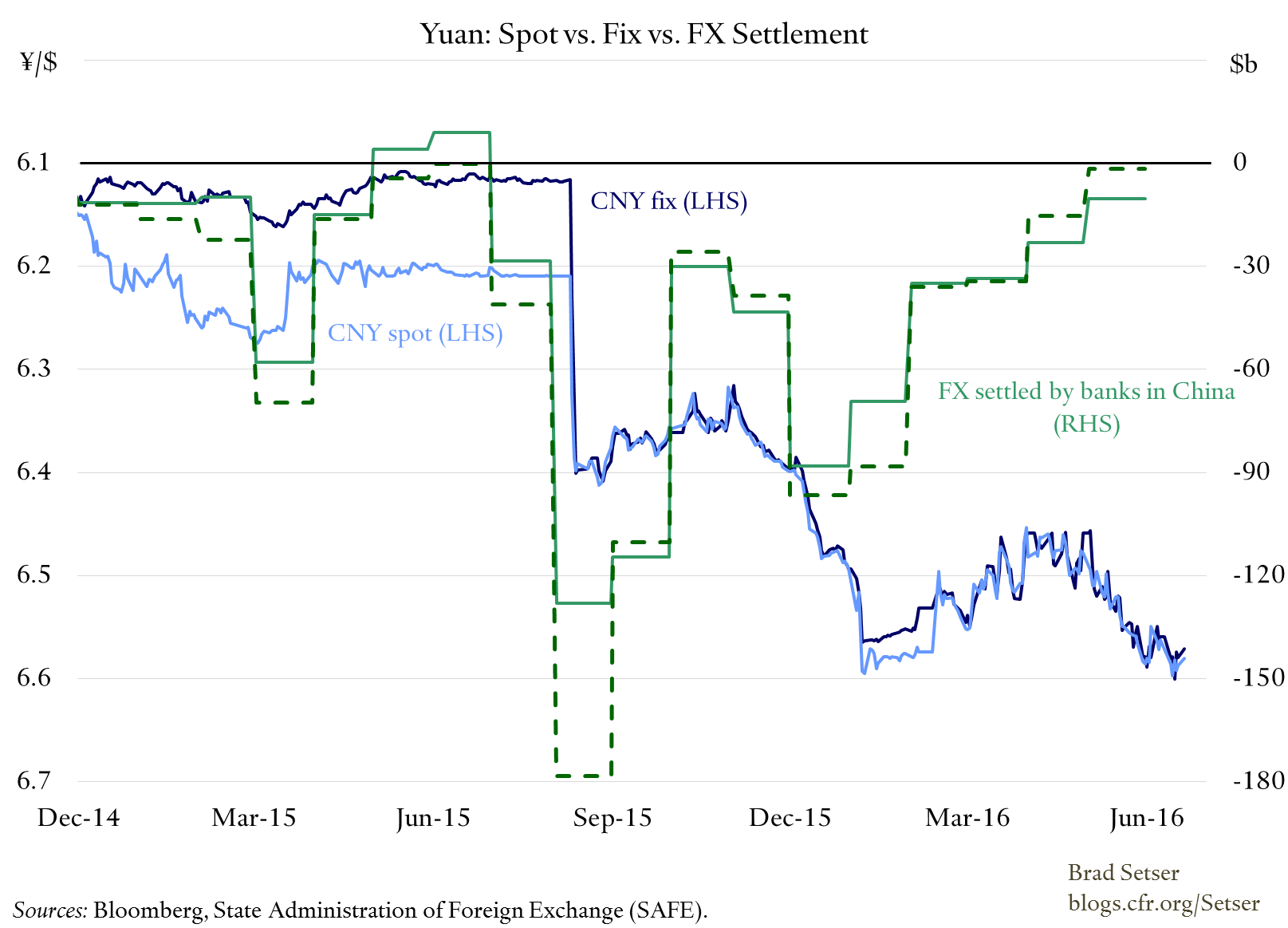 The PBOC’s balance sheet data shows a fall of between zero and $8 billion (I prefer the broadest measure—foreign assets, to foreign reserves, and the broader measure is flat). And SAFE’s data on foreign exchange (FX) settlement shows only $10 billion in sales by banks on behalf of clients, and $12.5 billion in total sales—both numbers are the smallest since last June.

The settlement data that includes forwards even fewer sales, as the spot data included a lot of settled forwards.

A couple of weeks ago I noted that May would be an interesting month for the evolution of China’s reserves.

That though doesn’t seem to have happened in May. All things China have stabilized.

So what has changed?

Four theories, building on ideas that I have laid out previously:

a) The tightening of controls has had an impact

b) The pay-down of external debt since last August has had an impact. China had increased its short-term cross border bank borrowing by about $500 billion from late 2012 to late 2014, creating the potential for a sharp swing if cross border flows reversed. We should have data through quarter one of 2016 soon. Paying down or hedging is a one time demand for foreign currency, so outflows naturally should slow after China’s external debt has been sorted.

c) The PBOC has been able to signal that it isn’t looking for a big depreciation against the dollar (even if it is willing to allow a weaker dollar to drag the yuan’s value down against a basket of currencies).

d) The data masks hidden sales by various state actors that are not captured in the reserves; "true" sales are higher than the visible sales.

Personally, I put some weight on all of the first three.

And fairly little weight on the last argument, for now.

I take the notion that China, and other Asian countries, often intervene through the backdoor very seriously. Last August, for example, a lot of China’s foreign exchange sales came from accounts in the state banks. But the available data for May—which is more limited than it should be—suggests the state banks added to their foreign exchange holdings, and rebuilt some of the buffer that they spent last August. The PBOC’s "Other foreign assets" (which corresponds to the required bank reserves that the banks hold in foreign currency) rose in May. The state banks’ forward book (net sales), based on the fx settlement data, also fell.

There could be more going on, but I have not discovered it.

And of course there is another factor. China’s ongoing monthly trade surplus is around $50 billion, and the ongoing monthly surplus in the broader current account should be at least $25 billion. China can finance a decent amount of capital flight (or portfolio diversification) without having to dip into its reserves.

A Bit More on Chinese, Belgian and Saudi Custodial Holdings