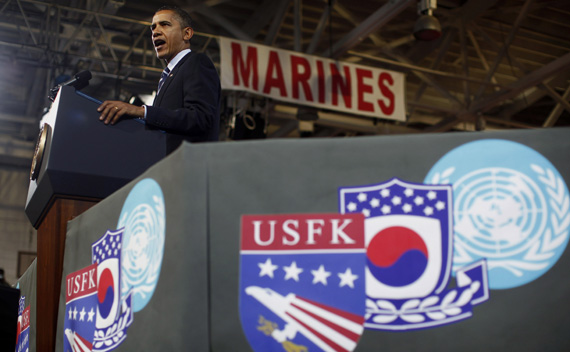 Although the main stories of the Obama visit to Korea revolved around the gap between the United States and China on global rebalancing issues at the G-20 and the failure of Presidents Obama and Lee to tee up the KORUS FTA, a third issue arose that dramatizes Sino-U.S. differences over the Korean peninsula.

At a Veterans’ Day event with U.S. troops hosted at Yongsan, President Obama stated that “Sixty years have come and gone since the communist armies first crossed the 38th Parallel...as we look around in this thriving democracy and its grateful, hopeful citizens, one thing is clear: This was no tie. This was victory.”  These comments mark a dramatic contrast with the views of China’s heir apparent, Vice President Xi Jinping, who stated the Korean War as “a great and just war for safeguarding peace and resisting aggression…It was also a great victory gained by the united combat forces of China’s and the DPRK’s civilians and soldiers, and a great victory in the pursuit of world peace and human progress" in comments commemorating the sixtieth anniversary of China’s entry into the Korean War only a few weeks ago. Those comments drew a stern and surprised response from South Korean officials. South Korean Foreign Minister Kim Seung-hwan stated that “It’s an immutable fact that the Korean War was started by North Korean aggression. I have nothing further to say because the international dispute over the Korean War is over.”

Although the New York Times has reported an apparent easing of the South Korean position on what it would take for North Korea to get back to the Six Party Talks, and North Korea’s unconstructive response, the differences in the statements between Obama and Xi Jinping hint that the gap between the United States and China over preferred end states on the Korean peninsula is too great to expect the kind of cooperation necessary to move North Korea forward on denuclearization.

These differences underscore the urgent need for a U.S.-ROK-PRC dialogue on North Korea-related issues as a prerequisite for progress in addressing issues of long-term stability on the Korean peninsula. Without greater prior understanding among these three parties, the enabling environment for success in any renewal of a nuclear dialogue with North Korea will continue to be absent.

Where Oh Where is Wen Jiabao?