At the first hint of a slowdown, the US tends to take steps -- like a fiscal stimulus package -- to support domestic demand.

Though to be fair, the US has also loosened monetary policy, and one of the ways monetary policy helps support the economy is through a weaker dollar and stronger exports. Some of the smartest advocates of fiscal stimulus advocated it in part because they worried that cutting policy rates would might fail to generate the intended stimulus because of financial weakness while risking a true dollar crisis.

And at the first hint of a cyclical slowdown, China tends to take steps -- slowing RMB appreciation, increasing export rebates -- to support its export sector.

Keith Bradsher of the New York Times has joined the chorus writing about signs that China’s economy is slowing, and that Southern Chinese manufacturers who produce for export have been particularly hard hit. There certainly is no shortage of supporting anecdotal evidence. And with growing signs of weakness in Europe -- and now signs that US export growth may be poised to slow -- it isn’t difficult to believe that Chinese exports are poised to slow.

But as of now, I don’t see any solid evidence of a slowdown in the actual export data. 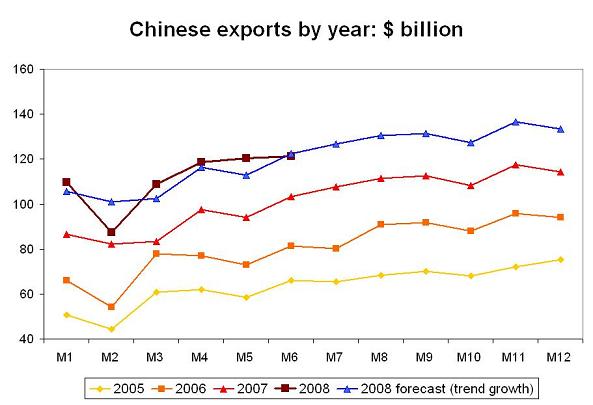 Yes, June was weak relative to May -- but May was unusually strong, as the usual holiday related dip didn’t occur this year. June is still right on trend.

I wouldn’t be surprised if exports do dip below this trend over the remainder of the year. China is too big an exporter not to be influenced by the global cycle -- and the global economy certainly looks to be slowing.

But to me the big surprise is that China hasn’t felt more of an impact of the US credit crunch to date. US domestic demand isn’t growing. Chinese exports to the US are flat. And there still isn’t -- at least in the data through June -- any real sign of an overall slowdown in Chinese exports.