A few weeks back, the New York Times looked at the “mystery” of Spain’s high level of unemployment.

The article highlighted a real debate about the right level of job protection in Spain, and in Europe.

But the headline obviously stuck in my mind. I do not think there should be any significant debate over why Spain continues to have a very high level of unemployment.

Look at employment. It is down well over over 10 percent from its pre-crisis levels. Even with the current recovery, there are over 2.5 million fewer people at work in Spain today than in 2007 (18 million versus 20.7 million workers over age 15 using the harmonized EU data; the national data has a similar change but a slightly higher level)

And domestic demand is also down well over 10 percentage points.

No mystery.* If demand in the United States was 10 percent below its 2007 level, rather than roughly 10 percent above its 2007 level, I would certainly hope that there would not be much of a debate on the source of a weak labor market. 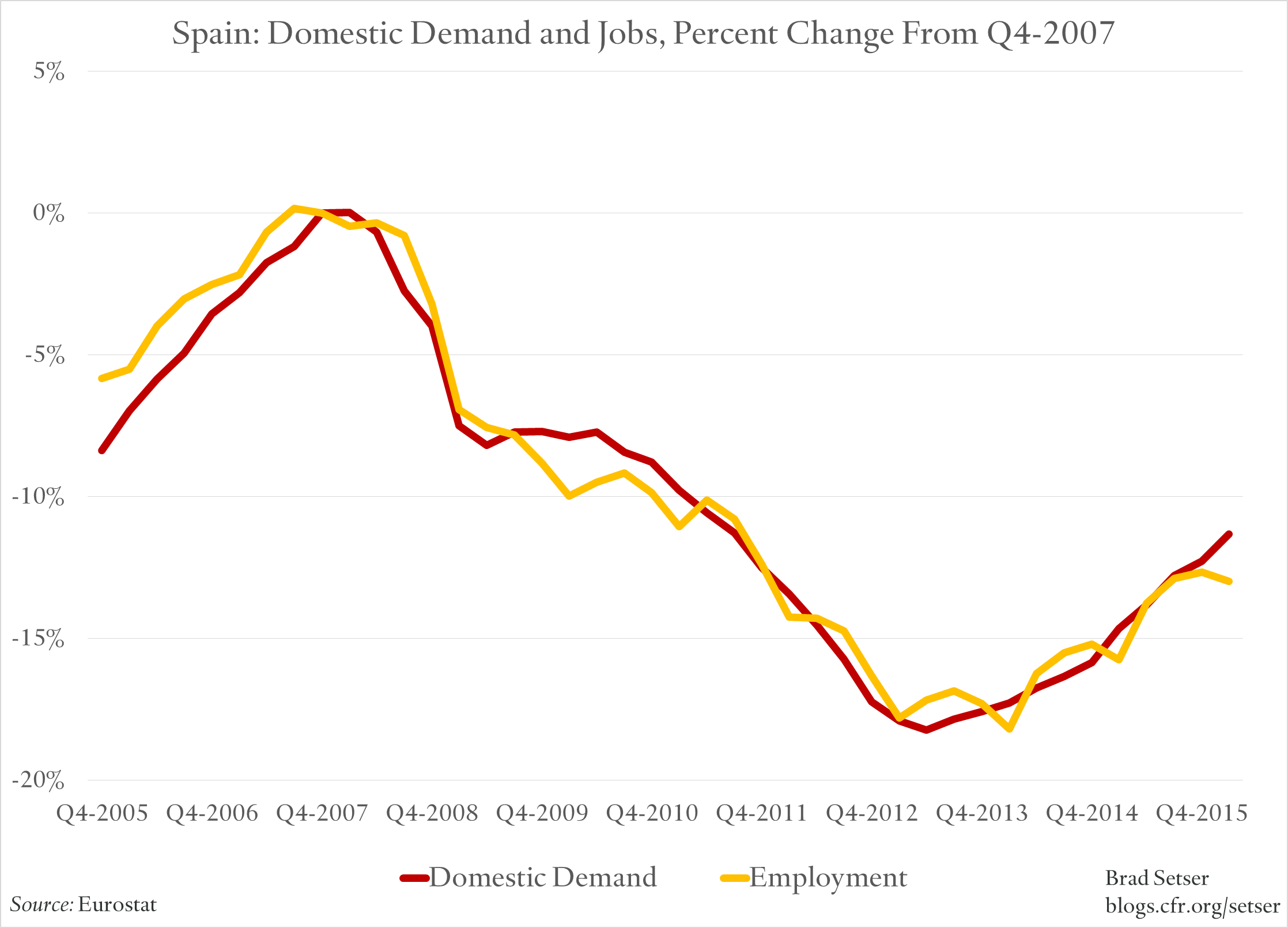 Spain did have a rather high level of unemployment back in the 1990s. Yet when demand was strong, folks were pulled into the labor market. Joblessness fell. From 2005 on, Spain’s labor market institutions were consistent will unemployment rates of well below 10 percent.

And—unless the stories European policy makers tell themselves are off—Spain’s labor market institutions should work better today than they did prior to the crisis. It is thus hard to see changes in labor laws since 2005 can explain why there are fewer people working now than in 2005.

That gets at the critical issue. The kind of structural reforms that facilitate an internal devaluation have an ambiguous impact on employment, especially in the short-run—a point now recognized by the IMF. Lower wages increase competitiveness, and support exports. But lower wages also mean less demand throughout the economy.

Spain’s case is particularly striking (Matthew Klein’s overview is still among the best places to start). Exports have done relatively well. They have added a cumulative 6 percentage points or so to Spain’s GDP since 2007. Spain is not Greece, which has struggled to raise overall exports even with a big fall in wages.

Thanks to what in the United States would be called transplants, Spain produces more cars than any European country not named Germany. More than Britain, France or Italy—all bigger economies. Spain now produces over 2 million cars a year, and about 2.75 million cars and trucks.

But there are still over half a million fewer jobs jobs in Spanish manufacturing than there were back in 2007.

One reason: Internal car sales are now only 1 million or so. That is well above lows of around 0.75 million a year, but still down significantly from the pre-crisis level of 1.5 million a year.

And more broadly, the change in “jobs” still tracks changes in internal demand not changes in exports, or the change in GDP. I measured all the real variables as contributions to GDP—and did the absolute change in jobs. But choosing other scale variables doesn’t change the story. Changes in demand and changes in jobs map to each other.** 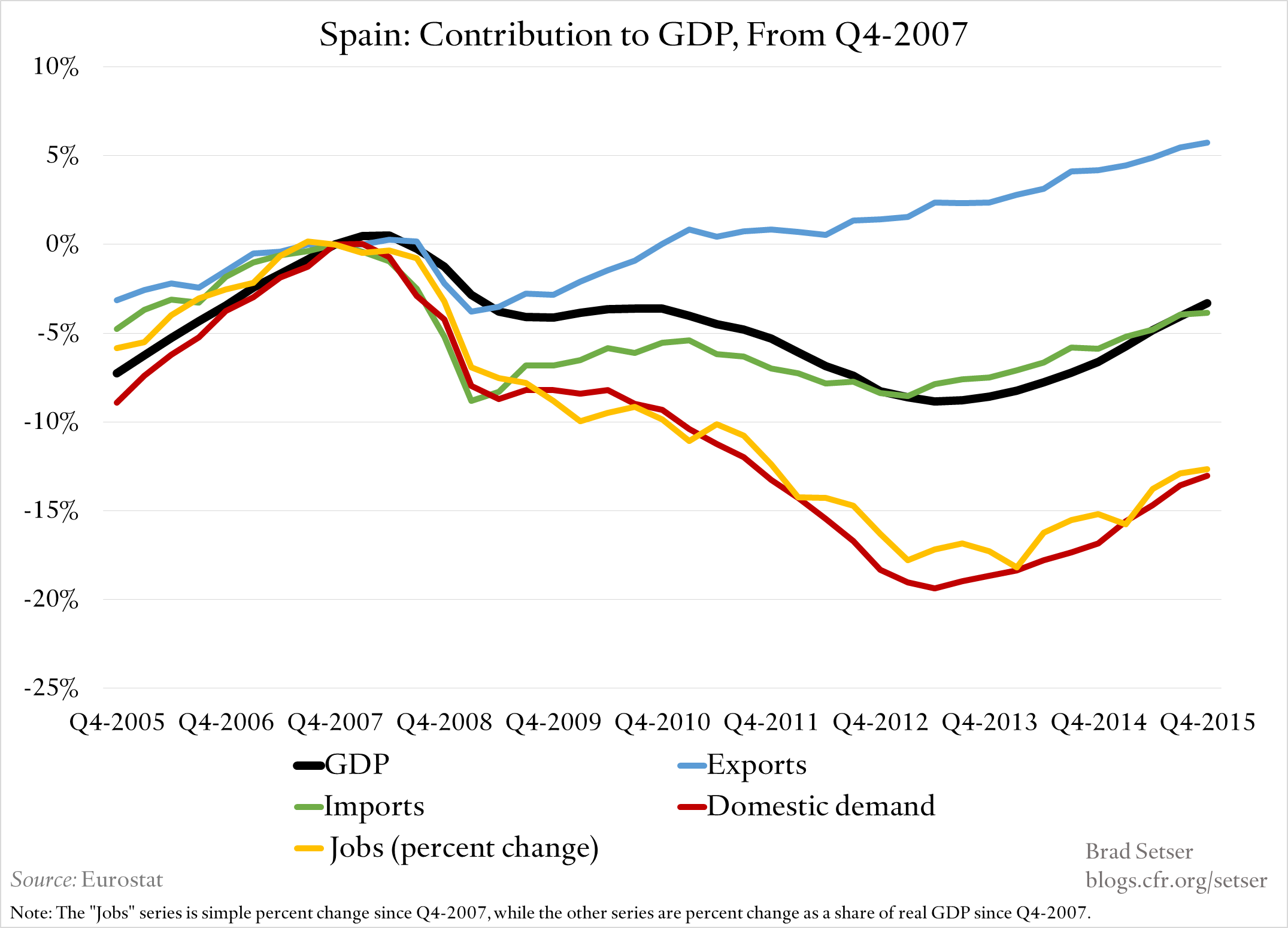 This shouldn’t be a surprise. The export sector is generally more productive than domestically facing sectors. So it takes a really large expansion of exports to generate enough jobs to offset the fall in jobs from a large fall in internal demand. Exports would need to be up by closer 15 percentage points of GDP not 5 percentage points of GDP to offset the jobs impact of an over 10 percent fall in domestic demand (even taking into account the fall in imports).

Job creation through internal devaluation and demand compression has proved to be a very difficult policy to pull off, especially inside a currency union where the stronger economies are themselves not generating large wage or price rises. Spain ran a large current account deficit prior to the global crisis and needed to reorient its economy toward exports. And to a significant degree it has done so. But that alone cannot easily compensate for the jobs lost from the fall in internal demand.

Spain needed—and needs—policies in the euro area that would make adjustments in relative wages and prices possible without outright falls in Spanish prices and wages. That would allow external adjustment with less internal demand compression.

And then there is the question of fiscal policy. Spain still runs a sizable fiscal deficit, around 5 percent of GDP. Domestic demand would be far lower than it is without that deficit. Yet there will be pressure to push any new Spanish government to bring that deficit down to meet European fiscal targets. And the best conceptual option—finding a way for demand supporting policies to be funded by the euro area as a whole—is not on the table.

* Peter Eavis of the New York Times obviously did not choose the headline on his article. And his article mentions the broader European debate on supporting demand versus prioritizing structural reform. But the emphasis was on demand-promoting policies by the euro area as whole. The variable that was left out, in my view, was Spain’s own level of demand.

** Greek employment is also down around 20 percent. But in Greece’s case the fall in jobs has been more moderate than the brutal fall in overall demand.