One thing that has puzzled me is that some of the countries that have -- implicitly at least -- been most critical of the expansion of the Fed’s balance sheet during the crisis long have had much larger balance sheets than the US Federal Reserve. 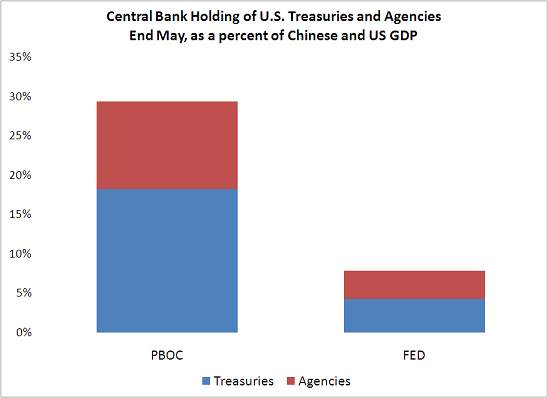 China consequently presumably knows a thing or two about how to prevent rapid expansion of the central banks balance sheet -- including rapid expansion from purchases of long-term US Treasuries and Agencies -- from producing unwanted inflation.

Indeed, there have been several years when the increase in the PBoC’s balance sheet due to its Treasury and Agency purchases looks a bit like the current increase in the Fed’s balance sheet from its Treasury and Agency purchases -- at the following Paul Swartz graph, which draws on the Setser/ Pandey data on China’s US holdings -- shows. 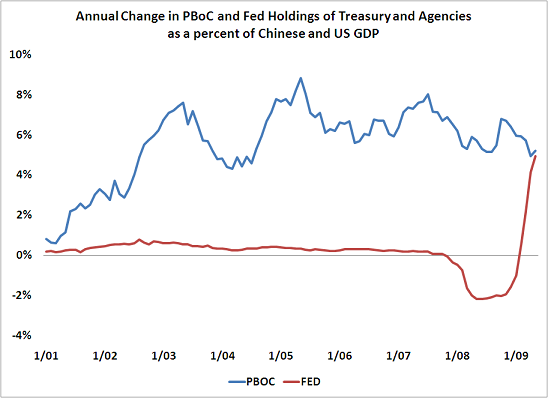 One note on the graph. The dip in the Fed’s holdings in 2008 reflected the sale of Treasuries to "sterilize" the Fed’s lending to the financial sector following Bear Stearns’ near collapse.

On a more serious note -- a lot of emerging market economies have long had central banks with large balance sheets, whether because of extensive lending to their domestic banking systems or a high level of international reserves. Managing a large balance sheet is of course a challenge. But it isn’t something that is totally unprecedented. And I suspect that the Fed is spending a lot of time thinking about how it could go about sterilizing its now much expanded balance sheet should that prove necessary.

"The addition of interest on reserves to the Fed’s toolkit effectively broke the link between the size of the Fed’s balance sheet and the stance of monetary policy. Policymakers now had the capacity to expand the size of the Fed’s liquidity facilities and other programs without the threat of compromising the control of monetary policy. .... In addition to paying interest on excess reserves, the Federal Reserve also has the ability to drain the excess reserves from the banking system. This can be done in a variety of ways: reverse repo transactions with dealers and other counterparties, securities sales from the Fed’s portfolio or bill issuance by the Treasury, with the funds deposited at the Federal Reserve. .... In other words, contrary to what is sometimes argued, it is not the case that our expanded balance sheet will inevitably prove inflationary."

Many emerging market central banks can testify that this is indeed the case.

* Or to be precise, a bigger increase in base money than the central bank desires to achieve its monetary policy goals.