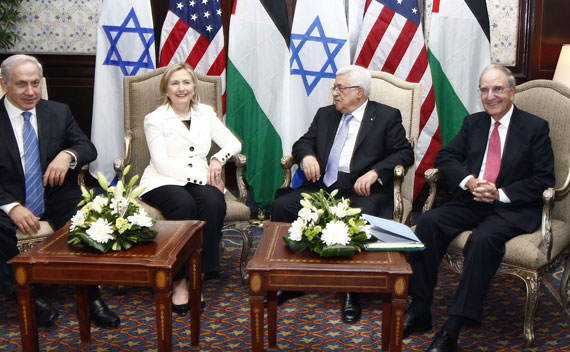 My colleague, Rob Danin, had an excellent CFR “First Take” yesterday on the administration’s change in direction on Israeli-Palestinian negotiations.  It will be interesting to hear what Secretary of State Hilary Clinton has to say about the peace process on Friday at Brookings, but as Rob indicated, for now at least the Obama administration is moving back to “proximity talks.”  This seems like it is a step in the wrong direction, but there is historical precedent for this move.  The Egyptian-Israeli negotiations that began after Egyptian President Anwar Sadat’s visit to Jerusalem ultimately became proximity talks.  To be sure, Israeli Prime Minister Menachem Begin showed up in Ismailiyya in January 1978, but direct talks went nowhere.  Camp David, the Blair House talks, and Carter’s visits to Egypt and Israel were all essentially proximity talks that led to the Egypt-Israel peace treaty.

Still, I am not optimistic (have I made that clear before?) on Israeli-Palestinian negotiations, whether they are face-to-face or proximity talks.  Unlike Sadat and Begin, who had a number of incentives to bring their negotiations to a successful conclusion, Prime Minister Benjamin Netanyahu and Palestinian President Mahmoud Abbas have none.  Egyptian president Anwar Sadat needed to recover Sinai, and by 1977 the glow of October 1973’s crossing of the Suez Canal had faded.  If he could clinch a deal to recover Egyptian land, he would be in a better position to manage festering domestic economic and political problems.  Moreover, once he stepped off his plane in Tel Aviv on November 19, 1977 he was fully committed to seeing the process he had begun by going to Israel to end positively.  As a result, Sadat got a deal on Sinai but at the expense of all the other principles—especially Palestinian rights—that he articulated in his famous speech to the Knesset.  Begin wanted a deal because peace with Egypt would ultimately bring an end to the Arab war option.  The fact that he was able to secure an agreement with Sadat without making any serious concessions on the West Bank and Gaza Strip demonstrates Begin’s superior negotiating skills and Sadat’s relative weakness (largely of his own doing), but that’s a whole other story.

It should be clear by now, but just to reiterate, President Abbas has no incentive to make a deal given his domestic political problems.  Instead, it seems he prefers rounding up international support for an independent Palestinian state in a vain effort to apply pressure on the Israelis.  Prime Minister Netanyahu has no real incentive to reach an agreement either.  He has his own political issues, in addition to the fact that there is a belief within Israel that a deal with Abbas would—unlike peace with Egypt—harm Israeli national security.

Ok, now back to the Cliff Lee watch…

I Still Don’t Get It

The Most Dangerous New York Knick