A standard argument is that China’s export success is overstated.   Sure, a lot of goods, especially electronics, are assembled in China.  But those goods are composed of imported parts.     Chinese labor just puts the imported components together.   China is the master of processing, not exporting.

The IMF has argued (see box 1.2) – and I agree -- that things are changing.  More and more electronic components are now made in China.   Until about 2004 the growth in China’s surplus with the US and Europe was accompanied by a rise China’s deficit with Asia.  In 2005 and 2006 though, China’s surplus with Europe and the US kept on rising but its deficit with Asia fell.    The obvious explanation: fewer imported components and more Chinese value-added.

I really liked Keith Bradsher’s article in the New York Times today.    He got – in my view – almost everything right.   Not the least the impact of the shift of automobile parts production toward China on small town Ohio.

He notes that Chinese domestic parts producers who raised their standards to supply GM’s Chinese operations (which primarily are geared toward producing for the Chinese market) found themselves in a position where they could also supply GM’s global operations.

"Multinational automakers set virtually the same quality standards for their operations all over the world. They are working closely with Chinese parts companies to help them meet these standards; once they do, they are allowed to submit bids for supplying factories elsewhere. “They get put on the global list and then can quote for anything worldwide,” said Nick Reilly, the president of Asian and Pacific operations for General Motors.

There is a reason why GM and the US auto makers complain about the yen but not the yuan.

When US and European auto makers first set up shop in China, it presumably led to more US exports.  GM's part suppliers sold US made components to GM China for cars intended for the Chinese market. Now, the supply chain GM developed in China for its Chinese operations are being “imported” back to the US.

Consider it a bit more evidence that China is increasingly competing in sectors that still produce goods in high-wage places.  Nothing wrong with that.   But usually booming exports – and more technologically sophisticated exports – are accompanied by a real appreciation.

China though is converging technologically faster than in its domestic prices are converging with world prices.    The result: booming exports.   We should have the May data soon.   But the basic trend is clear.   Look at this graph. 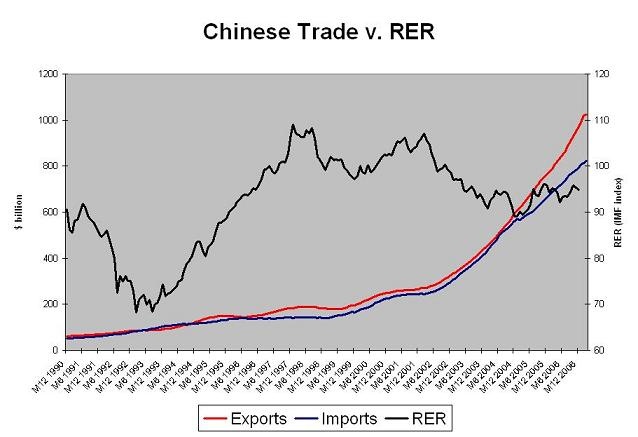 And yes, one conclusion that I draw from it is that the real exchange rate does matter.   The huge surge in Chinese exports (and reserves) certainly seemed to start with the RMB shifted from a trend real appreciation (95 to 202) to a trend real depreciation (2002 on ... ).