Jamil Anderlini of the FT has picked up on one of the surprises of the latest survey of foreign portfolio investment in the US: the $70 billion rise in China’s holdings of US equities between June 2007 and June 2008. Roughly $10 billion of that can be linked to China’s direct purchases of US equities – the kind that show up in the monthly TIC data. But $60 billion was initially bought by investors in other countries and thus didn’t show up in the monthly TIC data

After spending a bit more time looking at the TIC data, I didn’t have much trouble inferring that most of China’s equity purchases were routed through Hong Kong. 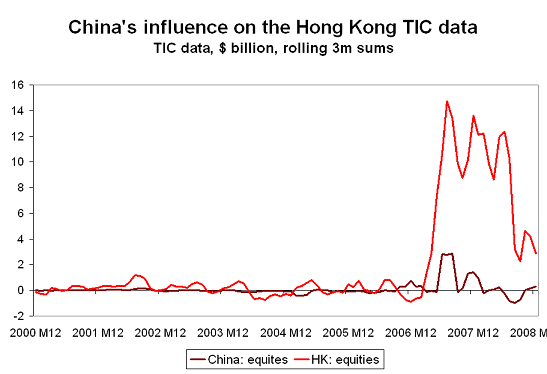 The US survey data reduced Hong Kong’s equity holdings (relative to those implied by summing up the monthly flows) by $44b even as it increased China’s holdings by around $60 billion. The pattern in the US data also fits well with the revelation last year that SAFE’s Hong Kong subsidiary had bought stakes in Australian banks and a host of British firms. Anderlini:

"Safe uses a Hong Kong subsidiary when investing in offshore equities in the US and other countries, including the UK, where this subsidiary took small stakes last year in dozens of UK companies including Rio Tinto, Royal Dutch Shell, BP, Barclays, Tesco and RBS. As part of its diversification in early 2008, Safe also gave some money to private equity firms such as TPG and to hedge funds on a managed account basis. This gave the Chinese government ultimate approval for how its money was invested, according to people who have worked with Safe.

It all sort of makes sense; China usually leaves traces of its activity in the TIC data once you know where to look.

The monthly TIC data suggests that China started to buy large quantities of US equities through Hong Kong in the spring of 2007. The big rise in China’s equity holdings in the June 2007 survey (equities rose from $4 billion in June 2006 to $29 billion in June 2007) offered the first hint of this shift in strategy. The Hong Kong flows suggest that China kept on buying through the first stage of the subprime crisis. Large purchases through Hong Kong didn’t come to an end until July 2008.

That, of course, implies that China bough a lot of equities just before the market fell sharply. Bad timing.

Anderlini reports that SAFE may have had as much as 15% of its portfolio in global equities and corporate bonds at one point last year:

"By that point Safe had moved well over 15 per cent of the country’s $1,800bn reserves into riskier assets, including equities and corporate bonds, according to people familiar with its strategy."

15% in global equities and corporate bonds is high for a traditional central bank reserve manager. 15% of $1.8 trillion (China’s end-June reserves) is also $270 billion. If most of that was in equities, only ADIA would have had a larger equity portfolio.

Not surprisingly, SAFE is now investing much more conservatively. Anderlini:

""They are a lot more cautious and risk-averse now and have basically returned to buying government bonds,” said someone who works with Safe. "

Anderlini though hints that the CIC has been a bit more active recently:

Analysts and Beijing insiders say CIC has learnt from Safe that transparency and openness do not pay and the way to avoid criticism is to avoid outside scrutiny. “CIC has turned to stealth mode; it is doing transactions and is looking at lots of resource-related deals all over the world but it is trying to hide its involvement,” said someone familiar with the fund’s strategy.

Presumably the CIC isn’t the only sovereign fund that isn’t all that keen on transparency right now. I suspect that a host of sovereign investors took on more risk just before the market for risky assets crashed.

A couple of additional asides on the way China purchases its foreign assets. In addition to buying equities through Hong Kong, China also seems to buy some of its Agency portfolio through Hong Kong. The survey revised China’s Agency holdings up by $90 billion while reducing Hong Kong’s holdings by about $30 billion and the UK’s holdings by about $115 billion. China also seems to be behind a decent share of all the Agencies sold to the UK. 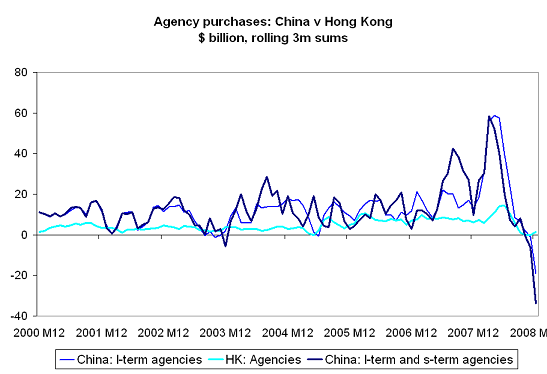 China may also buy some corporate bonds through Hong Kong data. But it also buys a fair number directly. 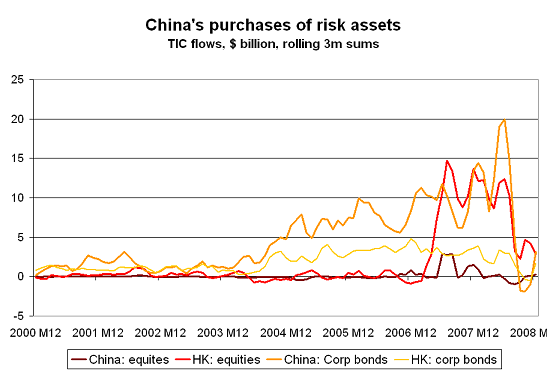 And for what it is worth, China seems to buy Treasuries both directly and through London – if SAFE London or SAFE Beijing buys a Treasury from a bank based in the UK, it doesn’t show up in the US data. What tends to show up instead is the purchase of US Treasuries by banks based in the UK who build up inventory in anticipation of Chinese demand.

UPDATE: I edited the post to make it clearer that not all of the 15% of its total portfolio that SAFE supposedly invested in equities and corporate bonds would not all have been invested in US equities.

China has more to worry about than its Treasury holdings