This post is co-authored by Sagatom Saha, research associate for energy and foreign policy at the Council on Foreign Relations. Read "The Impact of Removing Tax Preferences for U.S. Oil and Gas Production," a Discussion Paper from CFR’s Program on Energy Security and Climate Change in the Center for Geoeconomic Studies.

To assess these dueling arguments, Gilbert Metcalf, professor of economics at Tufts University, quantifies the effects of removing the three major tax preferences for U.S. oil and gas production (expensing of intangible drilling costs, percentage depletion, and the domestic manufacturing tax deduction). He finds that:

Domestic oil drilling activity could decline by roughly 9 percent, and domestic gas drilling activity could decline by roughly 11 percent, depending on natural gas prices. These declines in drilling would in turn lead to a long-run decline in domestic oil and gas production. As a result, the global price of oil could rise by 1 percent by 2030 and domestic production could drop 5 percent; global consumption could fall by less than 1 percent. Domestic natural gas prices, meanwhile, could rise between 7 and 10 percent, and both domestic production and consumption of natural gas could fall between 3 and 4 percent.

This might mean an increase of two pennies per gallon of gasoline at the pump and seven dollars per month for an average household’s electricity bill—small effects compared to recent variations in prices. 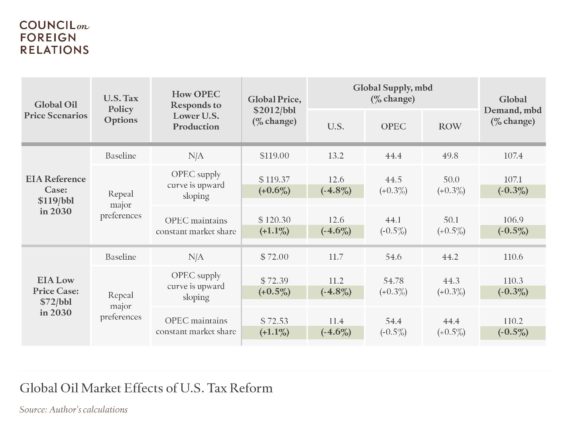 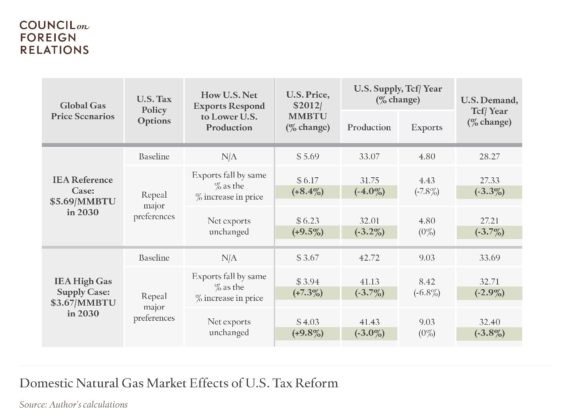 To date, no study that was transparent about its methodology had rigorously assessed how oil and gas firms might respond to tax reform. In particular, some previous studies had oversimplified the problem, assuming that the $4 billion in lost annual government revenue equaled the value of the preferences to firms. But since tax preferences increase firms’ immediate cash availability, they are even more valuable to the firms. On top of this, previous studies failed to hone in on marginal effects—that is, how the presence or absence of tax breaks affect which projects firms will consider profitable enough to drill. Recognizing that this paper improves upon past studies, The New York Times’ Eduardo Porter writes:

Mr. Metcalf’s analysis is the most sophisticated yet on the impact of government supports, worth roughly $4 billion a year. Extrapolating from the observed reaction of energy companies to fluctuations in the price of oil and gas, he models how a loss of subsidies might curtail drilling and thus affect production, prices and consumer demand.

After quantifying the minimal effects tax reform would have on oil and gas prices, production, and consumption, Metcalf concludes that its direct effects on U.S. energy security, greenhouse gas emissions, and economic health are also limited.

But eliminating subsidies to fossil fuel producers can strengthen U.S. credibility and leverage in international climate diplomacy. In 2009, the G20 countries made a historic agreement to phase out fossil fuel subsidies. Yet the 2016 G20 energy ministerial recently concluded with a disappointing announcement that made no mention of a concrete timescale for achieving this goal. U.S. fossil fuel subsidy reform could help break the logjam. For example, the United States and China will each publish peer reviews of the other’s fossil fuel subsidies at the G20 general meeting in September, and U.S. action to repeal its own subsidies may spur China to make similar efforts. It would also strengthen U.S. leadership to call on other developed and developing countries to remove both producer and consumer fossil fuel subsidies that drive up emissions around the world.

What Will It Take to Turn Natural Gas Around in India?