This wasn’t exactly a surprise, despite Secretary Geithner’s comments in January. The US made a large global stimulus -- and a larger IMF -- its priority in the G20, not exchange rate reform.

Moreover, this isn’t the right time to force resolution of this issue.

China’s exports to world and US imports from China are both falling. Chinese reserve growth -- read the amount of dollars China has to buy to keep its currency from appreciating -- has fallen sharply. And perhaps most importantly, the RMB was one of the few emerging market currencies that appreciated during the crisis in real terms.

According to the (recently rebased) BIS real effective exchange rate index, the RMB has appreciated by over 10% since June 2008 -- and by almost 18% since December 2007. Other indexes show sligtly smaller real appreciation. But there is little doubt that China appreciated in real terms when many other emerging economies depreciated in real terms. This seems to have been been an important factor in the Administration’s decision. The Treasury noted that the RMB was basically stable when most other emerging currencies fell ("As the crisis intensified, the currency appreciated slightly against the dollar when most other emerging market and other currencies fell sharply against the dollar.")* 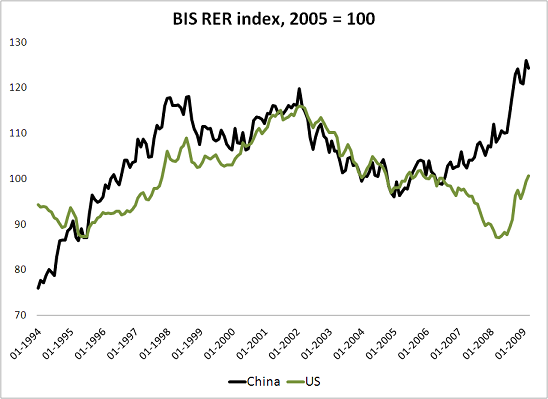 Make no mistake, China’s currency still looks undervalued. It is only a bit higher -- according to the BIS index-- than it was in 2001 or 2002, back when China was exporting a fraction of what it does now. In other words, the rise in the productivity of China’s economy hasn’t been mirrored by a rise in the external purchasing power of its currency. That is a big reason why China’s current account surplus remains large.

And the underlying issue remains: the biggest driver of moves in China’s real exchange rate remains moves in the dollar. History suggests that China cannot count on dollar appreciation to bring about the real appreciation it and the global economy need if China’s surplus -- and thus China’s accumulation of money-losing foreign assets -- is going to come down. It will be hard -- in my view -- to have a stable international monetary system if the currencies of all the major economies but one float against each other. And China is now a major economy by any measure.

Especially when there are a few tentative signs that China’s stimulus may be gaining some traction.

The Obama Administration made it clear, I assume, that the size of China’s stimulus would be a factor in its judgment. The world needs demand. And if a large Chinese stimulus pushes up inflation in China and that led to a real appreciation, that would help bring about the needed real exchange rate adjustment even absent further nominal appreciation against the dollar.

Even the Peterson Institute’s Morris Goldstein - a hawk on this issue -- didn’t seem to think this was the time to label China a manipulator. Back in January he argued that the US should indicate that China met the criteria for manipulation from 2004 to the first part of 2008.

"I think we have a somewhat more nuanced situation than we had a year ago or so. I think they should say, to set the record straight, that China had been manipulating in the past and still is doing so, but they were manipulating particularly from 2004 through 2007, 2008. They’re still doing it in the sense of large scale intervention to keep the renminbi from rising as much as it should. And that such currency manipulation is against the IMF rules of the game and it’s undesirable. The report should say that. The report should also acknowledge that in the last 15 months or so, they’ve made a lot more progress in allowing the rate to move. Their global current account surplus is peaked. It’s probably starting to decline. So I think they should be encouraged to cut down on the scale of intervention, but I wouldn’t recommend punitive penalties right now."

But so long as China pegs tightly to the dollar and runs a large current account surplus, the basic issue is not going to go away.

* The appreciation against the dollar in nominal terms was so slight as to be almost impossible to perceive.

Lamido Sanusi: A Man of Nigeria’s Past and Possibly Its Future