I previously have noted that—if you exclude processing imports—China’s imports of manufactures are low relative to its GDP. I suspect the interlinked "China, Inc" connections between Party and State (described well by Mark Wu) have something to do with this. Manufactured imports, net of processing imports (processing imports are re-exported), peaked as a share of China’s GDP back in 2003. 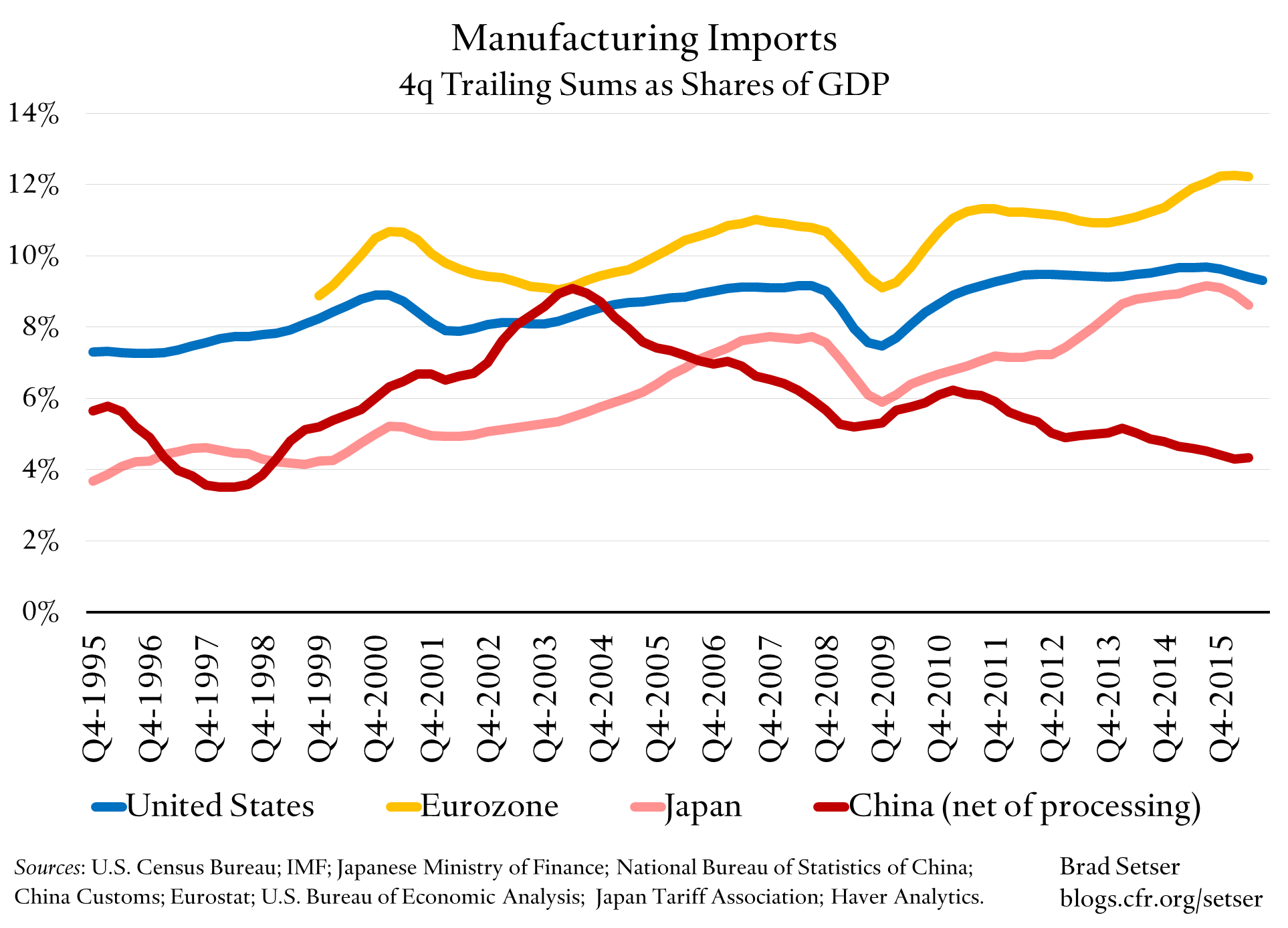 The other "trade" outlier among the world’s big economic blocks is the United States. U.S. imports of manufactures aren’t out of line with those of say the eurozone. Or for that matter with Japan, which imports a lot more manufactures now than it used too. The U.S. though does stand out for the low level of its manufactured exports. 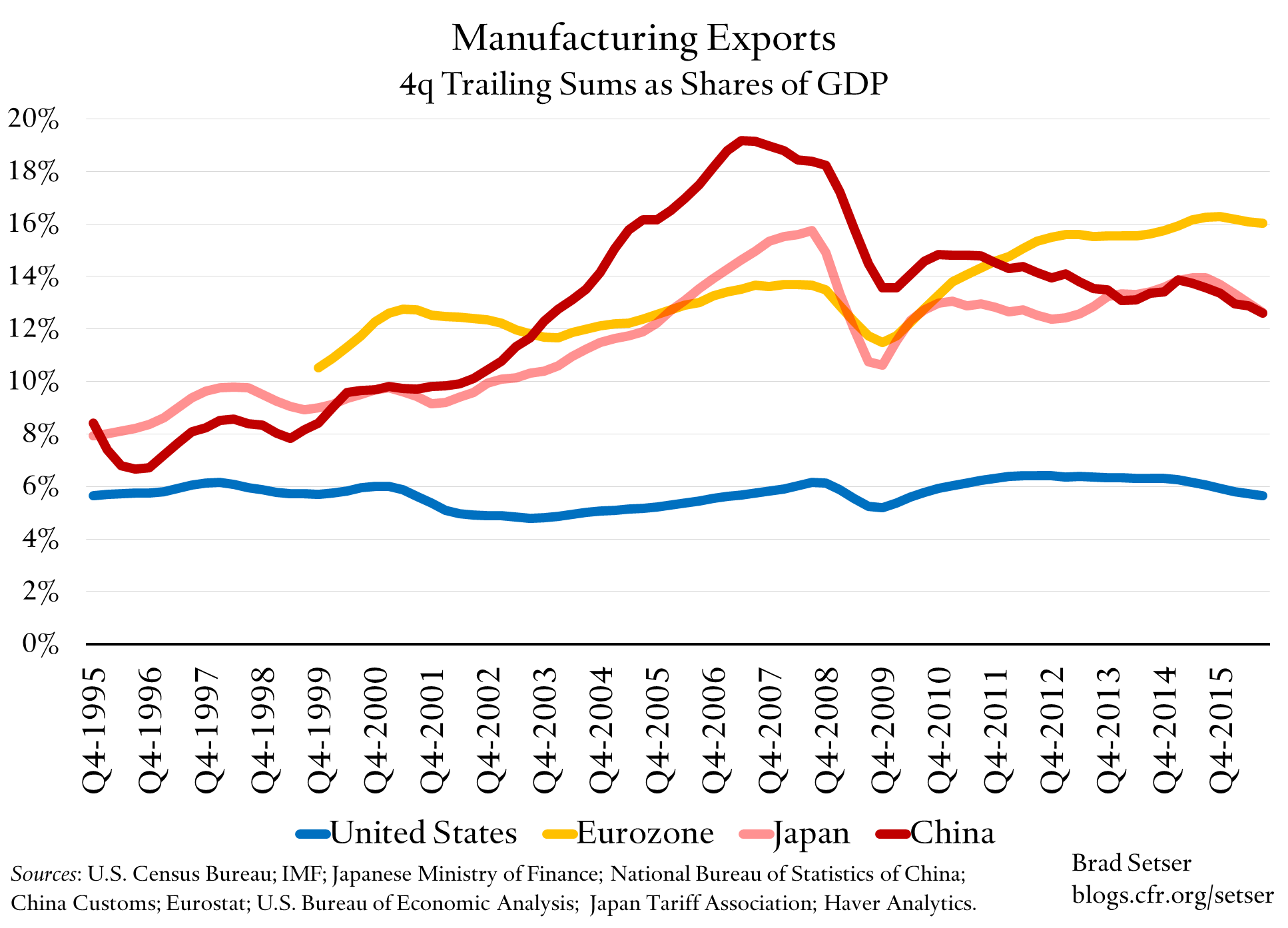 I am using an imperfect proxy for U.S. manufactures here—the sum of capital goods, autos, and consumer goods in the end use data. That leaves out manufactured goods in industrial supplies (notably chemicals, which sort of blur the line between manufactures and commodities given that competitive advantage is often determined by proximity to a low cost supply of ethane and the like). Adding in chemicals and plastics though would not significantly alter the picture (and would make the data harder to replicate). I confess that I prioritized using easy to reproduce (and easy to update) data that tells the basic story over analytical perfection.

I also adjust the Chinese data by netting out processing imports from China’s exports in a way that I do not adjust the other countries data. Without that adjustment, China is on a different scale.

The result of this pattern of exports and imports is that the U.S. runs a sizable trade deficit in manufactures, while the other big integrated economic blocks run surpluses in manufactures. 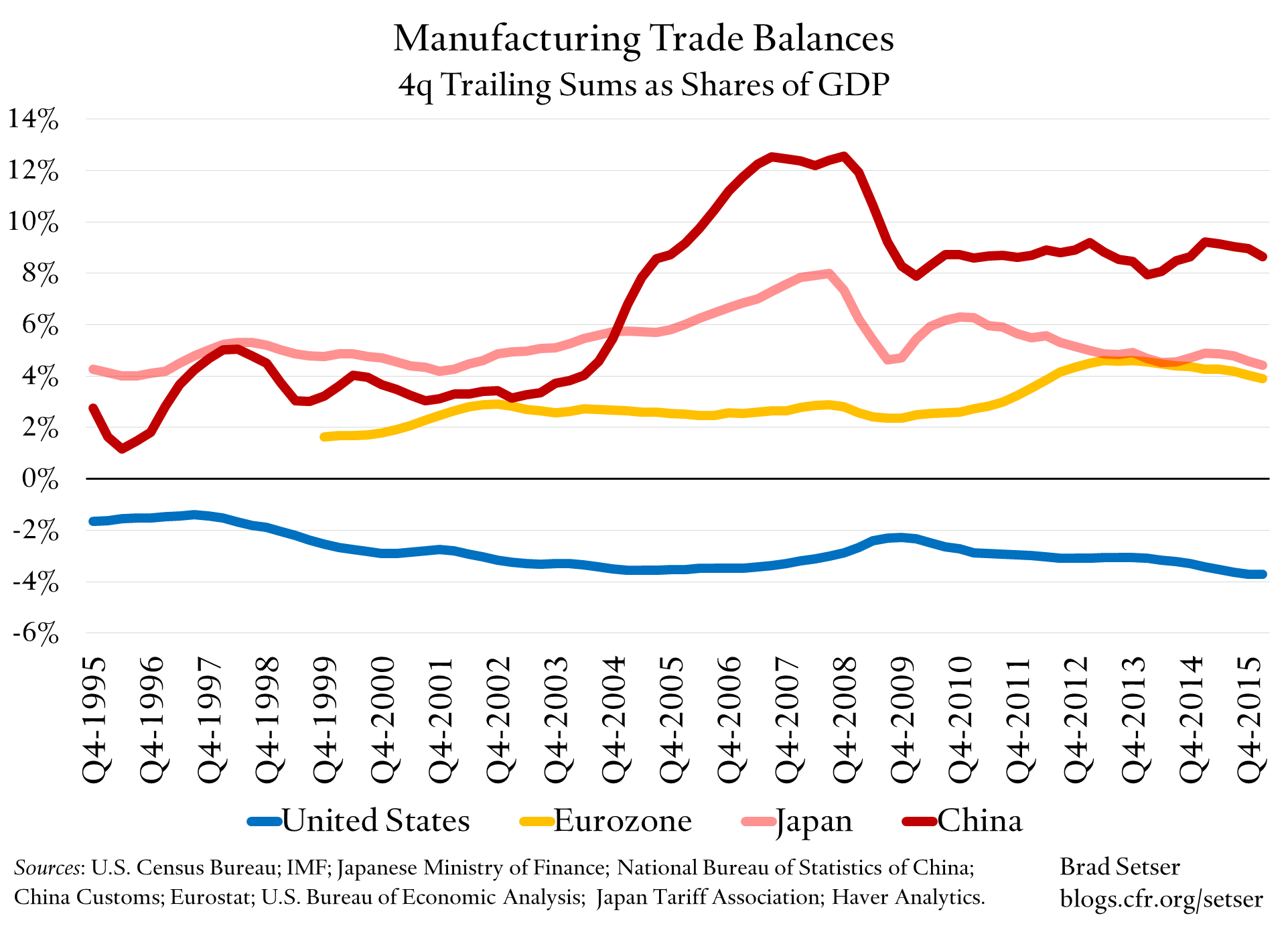 Part of this is natural.

Countries that are not well supplied with natural resources have to export manufactures in order to import resources if their trade is to balance. Japan, Germany, and China fall into this category. All need to import oil. The U.S. does too, but now on a much smaller scale.

A surplus in services can also finance a deficit in manufactures. And the U.S. has a decent sized surplus in services, thanks in part to Americans’ low propensity to travel abroad and thanks in part to the strength of U.S. exports of intellectual property heavy services (though many firms do their best to move potential services exports into the income line of the balance of paymentsand the process lower their tax bill.) So too can a surplus in income from foreign investment abroad. The earnings from past investment abroad can finance a high level of current imports.

But much of the deficit reflects the fact that the U.S. also runs—unlike China, Japan, or the eurozone—a significant current account deficit.

Rough quantification suggests that the "jobs" impact between a deficit of 4 percent of GDP on manufactures and a say a surplus of 2 percent of GDP (like that of the eurozone) is fairly significant. The current global pattern of surpluses and deficits has non-trivial consequences for the global distribution of manufacturing jobs.

The Commerce Department’s "jobs supported by export" calculation implies each percentage point of GDP in manufactured exports should support around 800,000 jobs in the manufacturing sector. The Commerce Department’s latest estimates actually imply that the number of jobs supported by a percentage point of goods exports increased a bit in the past couple of years (for reasons I don’t fully understand) and now exceeds 800,000. Not all those jobs are in manufacturing or other goods producers per se—some of the jobs supported by exports are in services that are tied to the factory and the like. But a lot of them are. 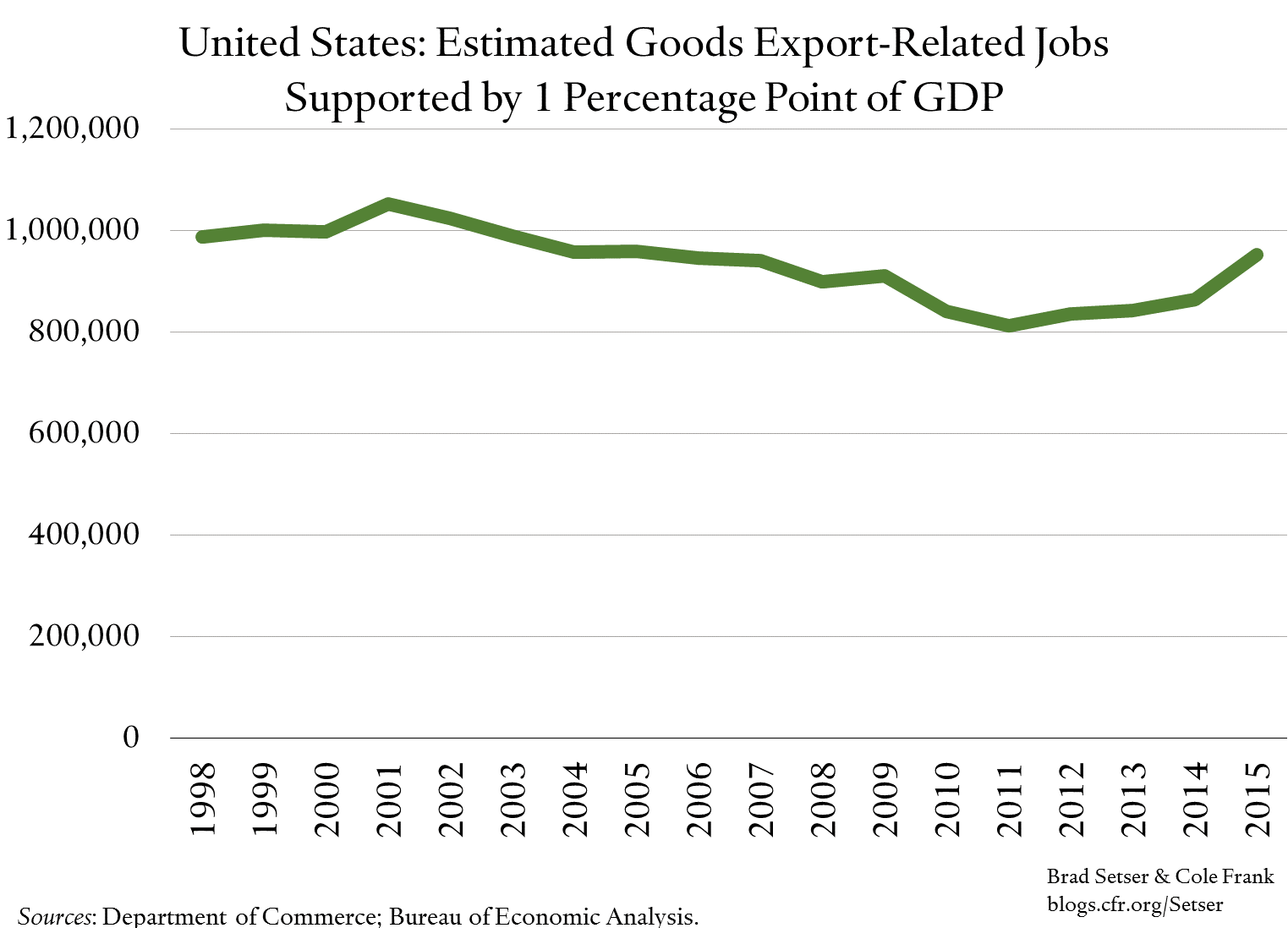 And conversely, it is worth highlighting that the swing in the U.S. commodity balance—the massive fall in the U.S. petrol deficit—likely implies fewer manufacturing exports and jobs over time. A big part of global trade is still manufactured goods for bulk commodities and hydrocarbons, and the U.S. has less need to export (manufactures) into order to import (petrol), so to speak. Through its impact on the dollar, the large fall in the petrol deficit likely hurt manufacturing-oriented export sectors. The world is complex.

* According to the Bureau of Labor Statistics, U.S. manufacturing jobs fell from around 17 million in 2000 to around 12 million.

** There is one complexity here that complicates any simple analysis. From 1997 to 2000, the run up in the trade deficit didn’t lower the aggregate level of manufacturing jobs. The U.S. investment boom of the time was generating a ton of demand, and that was supporting manufacturing jobs in the U.S. and abroad. The jobs impact of the deficit soared during the tech bust, when the dollar remained strong even after U.S. investment demand collapsed—augmented by the start of the big China shock.

Two Trade Variables To Watch in 2017