The idea behind “fiscally-driven external rebalancing” is straightforward.

This logic fits well with IMF orthodoxy: the IMF generally finds that fiscal policy has a significant impact on the external balance, unlike trade policy.*

But it often encounters opposition, as it implies that the fiscal policy that is right for one country can be wrong for another. Many Germans, for example, think they need to run fiscal surpluses to set a good example for their neighbors. Yet the logic of using fiscal policy to drive external trade adjustment runs in the opposite direction. To bring its trade surplus down, Germany would need to run a looser fiscal policy. The positive impact of such policies on demand in Germany (and other the surplus countries) would spillover to the global economy and allow countries with external deficits to tighten their fiscal policies without creating a broader shortfall of demand that slows growth.

So one implication of using fiscal policy to drive trade rebalancing is that there is no single fiscal policy target (or fiscal policy direction) that works for all countries. Budget balance for example isn’t always the right goal of national fiscal policy. Some countries need to run fiscal deficits to help bring their external surpluses down. 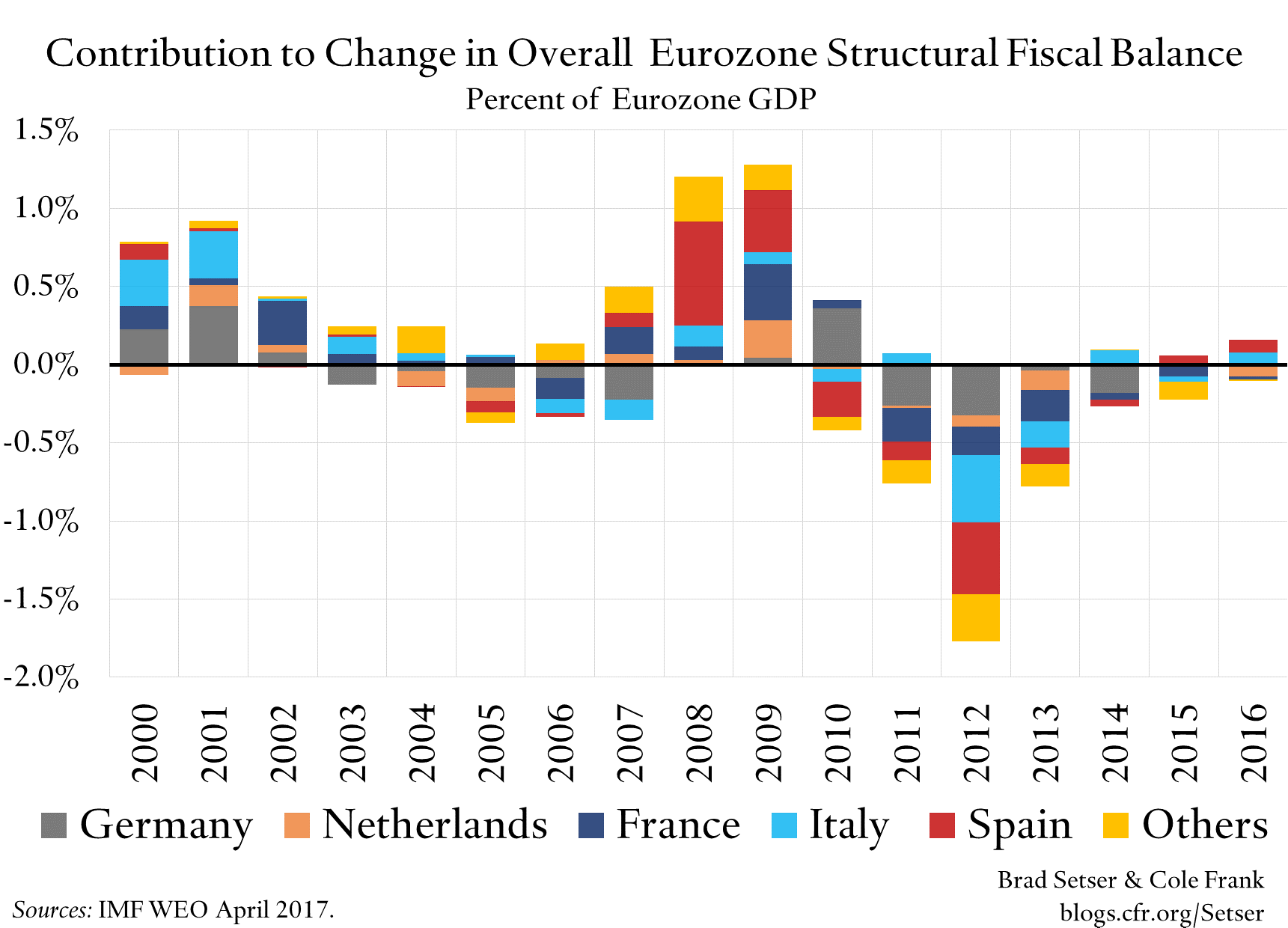 The big external surpluses in the eurozone are in the Netherlands and Germany. Germany and the Netherlands also have a lot of fiscal space thanks to relatively low levels of public debt, and could safely run expansionary fiscal policies without calling their own fiscal solvency into question. And the countries with lots of external debt and limited fiscal space tend to be further to the south: Italy and Spain for example (I am over generalizing a bit here—Spain has more external debt than Italy and a bigger fiscal deficit, while Italy has a bigger public debt stock and less growth).***

The eurozone also runs a significant overall external surplus, has internal economic slack and has low interest rates—it could help bring global trade into better balance (and raise the global return on saving) with a more expansionary overall fiscal policy while also bringing its own economy closer to full employment.

Win-win, at least in theory.

In practice, though, the eurozone didn’t run an expansionary overall fiscal policy last year. The change in the structural fiscal balance was positive, but only just.*** 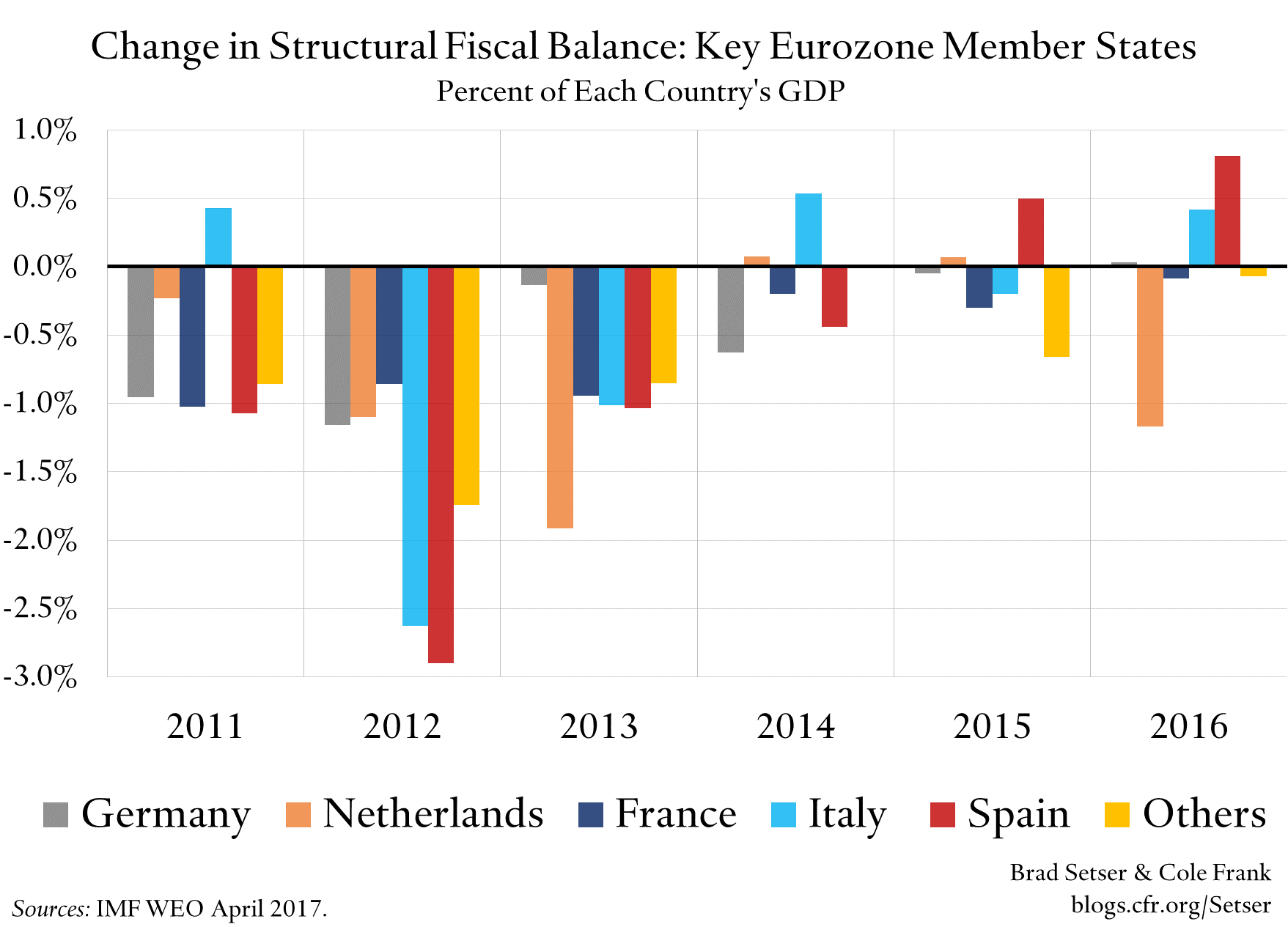 And what of Germany? Well, the IMF thought a year ago that Germany was doing a fiscal expansion—one that would bring its fiscal surplus down from about one percent of GDP (see paragraph 9 of the staff report, and the table on German general government operations on p. 8).

That’s the problem. It turns out surplus countries seem to like surpluses. They often aren’t willing to take policy action to expand demand.

And the since the output of the eurozone's traditional deficit countries is generally constrained by weak demand, they tend to want to run more expansionary policies to boost their economies.

And of course the U.S. would need to adopt a more contractionary fiscal policy, one aimed at bringing the U.S. current account deficit down. 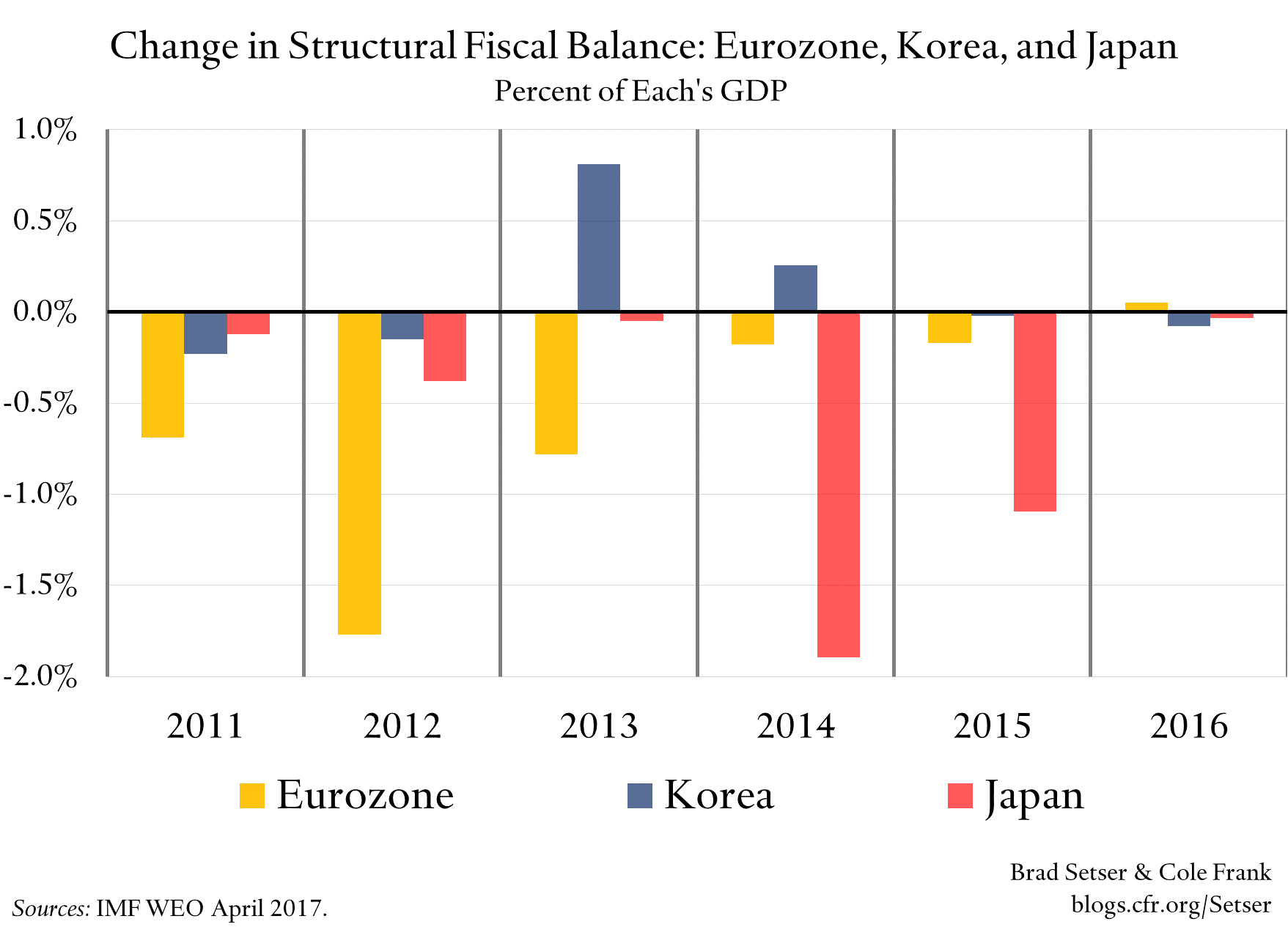 Korea’s structural surplus remains big (the IMF looks at a measure of the fiscal balance that includes the surplus in Korea’s social security system, which offsets the headline deficit) and didn’t change much in 2016. The latest WEO data suggests a (very) modest structural fiscal tightening in 2016, with more tightening in 2017.

Japan has an ongoing structural fiscal deficit—its current account surplus comes from high corporate savings, not a tight fiscal policy. It has slowed the pace of consolidation from 2014 (thankfully) but its structural balance does't suggest that is doing much to support demand. It continues to rely heavily on net exports to support its growth.

And, as for the United States…well, the President wants a big deficit-funded tax cut. ****

*The IMF recognized in its 2016 external sector report that fiscal policy should play a role supporting balance of payments adjustment in many (but not all) “surplus” economies. See paragraph 28: “Countries facing stronger-than-warranted external positions and negative output gaps should primarily rely on fiscal policy to help close both domestic and external gaps, although the stimulus should be geared to support structural reform objectives. However, reliance on fiscal support depends very much on the availability of buffers. Korea, Sweden, Thailand, and the Netherlands appear to have room to ease in relative terms. Other countries, like Japan, where current fiscal space is more limited, will need to coordinate carefully the use of monetary and fiscal space with structural and income policies. Meanwhile, in the few cases where positive external gaps are paired with near zero or positive output gaps (Malaysia, Germany), monetary policy, if available as an independent instrument, should play a larger role (Malaysia). Those economies without independent monetary policy but with fiscal policy space (Germany), should use that space to finance growth-friendly policies that would support external rebalancing (including through an internal appreciation) with only a temporary and limited effect on the output gap."

** For the charts, Cole Frank and I used changes in the cyclically adjusted structural fiscal balance, as reported in the the IMF's latest WEO data base. There is an argument that the structural fiscal balance isn't the right measure, as interest expenditure has fallen (though you can debate this—interest paid domestically should support some spending), and the right measures for the fiscal impulse is the change in the cyclically adjusted primary fiscal balance. The IMF doesn't report that though (it reports the primary balance, but not the cyclically adjusted primary balance). Eyeballing the numbers, though, doesn't suggest this matters much, with the potential exception of Japan (where the debt really is held domestically). For Spain in 2012, I did use the change in the cyclically adjusted IMF primary balance as reported in the 2014 IMF article IV—as the structural balance includes the bank recapitalization bill (the "official" number implied a consolidation of around 4 percent of GDP). More generally, it should be noted these numbers are estimates, not the word of god. The 2016 numbers likely will be revised.

*** Some additional throat clearing. The eurozone used to have an internal version of the world’s balance of payments imbalances. Some countries ran big surpluses, others ran big deficits. By and large, those deficits have disappeared, while the surpluses stayed big—hence the rise in the eurozone's surplus with the world. But the large deficits left behind a large stock of external debt (notably in Greece, Portugal, and Spain), and the fall in the deficit left many parts of the eurozone short demand. So an imbalances problem inside the eurozone turned into a demand problem inside Europe, and, without the deficits in the “south” the eurozone started running large external surpluses and exporting its savings to the world.

**** U.S. Treasury Secretary Mnuchin has embraced the argument that fiscal reflation in the surplus countries can help address global balance of payments imbalances. I agree. But it is kind of hard to square that argument with the Trump Administration’s deficit raising tax proposals.