A big caveat. Apple is being used to represent a lot of companies with very valuable intellectual property (IP) that have built up similarly outsized piles of cash outside the United States; it is the most high-profile case, but it is hardly unique.

The iPhone, famously, is designed in California and is assembled in China out of parts manufactured (mostly) in Asia.

I do not think the recent coverage about what it would take for Apple to manufacture the iPhone in the United States has added much to Keith Bradsher and Charles Duhigg’s spectacular reporting back in 2012. And, to my mind at least, the big revelation in the Bradsher/Duhigg article was that even the high-end components of an iPhone, and even those high-end components that come from American companies, typically aren’t made in America. Corning now manufactures its gorilla glass mostly in Asia, the chip designers farm out production to Asian fabs, etc.

I suspect not much has changed since then.

No one questions that the iPhone is designed in the United States. And a lot of the software that makes an iPhone an iPhone is also created in the United States. And the export of intellectual property rights—the U.S. design and engineering embedded in a “designed in California” iPhone sold in Asia or Europe—should in theory enter into the balance of payments as a services export.

I would think it should show up in the line item for the export of “charges for the use of intellectual property, computer software” though in practice it may enter as a payment for research and development services (see below). Like I said, this is a wonky post.

A while back I thought that maybe U.S. growing exports of software (in the services data) would offset the growing U.S. trade deficit in computer hardware and electronics. But I couldn’t find enough software exports in the balance of payments data. Software exports the past few years have been around $40 billion (see table 3.1 of the international transactions data; R&D exports in 2015 were $35 billion), far less than the U.S. spends on imported hardware.

Drawing on Nick Confessore’s reporting, and some of the details about Apple’s Irish subsidiary that were in the news a while back—I now think I know why software exports aren’t a bit higher.

Consider the balance of payments impact of the following corporate structure, as reported by Confessore:

“Apple, for example, is an American company, headquartered in Cupertino, California. Most of the research and development that goes into an iPhone happens in California. But according to Apple, if you buy an iPhone in Europe or Asia, the intellectual-property rights contained in your phone actually belong to Apple subsidiaries in Ireland … Apple charges those subsidiaries relatively little for the rights to this intellectual property, yet allows them to collect most of the money Apple makes from selling the phone. In 2011 the Irish subsidiaries…collected two-thirds of Apples worldwide pretax income.”

The actual amounts Apple charges its very profitable subsidiary in Ireland were included in the Senate investigative committee report (the Levin report) on the topic.

"For instance, in 2011, roughly 40 percent of Apple’s worldwide sales occurred in the Americas, with the remaining 60 percent occurring offshore. That same year, Apple’s worldwide research and development costs totaled $2.4 billion. Apple Inc. and ASI [Apple Sales International] contributed to these shared expenses based on each entity’s percentage of worldwide sales. Apple Inc. paid 40 percent or $1.0 billion, while ASI paid the remaining 60 percent or $1.4 billion."

The U.S. portion of $1.4 billion that Apple charges its Irish subsidiaries for the R&D that generates Apple’s valuable intellectual property rights is likely what enters into the balance of payments as a service export.

The profits earned by Apple’s Irish subsidiaries ($22 billion in 2011, according to the Senate Report) almost certainly enter the balance of payments as investment income. And since Apple Operations International and Apple Sales International do not formally repatriate the income they earn abroad back to the U.S. (to limit Apple’s U.S. corporate tax bill), the net result is also a rise in the reinvested earnings component of the income balance.

Reinvested earnings—income earned abroad and retained in the offshore subsidiary rather than remitted back as dividend payments to U.S. headquarters—now account for the bulk of the foreign direct investment income line in the balance of payments (take a look at Matt Klein’s post on this). Reinvested earnings account for $304 billion of the $413 billion US companies earned abroad in 2015—see table 4.2 of the balance of payments data.

Apple here is really a metaphor. It is the most high profile case, but it is—judging from the size of reinvested earnings in the balance of payments and the cash balances various firms have built up abroad—far from unique.

Certainly the profits that U.S. firms report in low-tax jurisdictions—Ireland, the Netherlands, Luxembourg, the Caribbean, Singapore—are now large relative to U.S. exports of software and research and development services.**

There is a broader point here. Trade theory says that if the winners from globalization compensate the losers from globalization, everyone is better off. But I am not quite sure how that is supposed to happen if the winners are in some significant part able to structure their affairs so that a large share of their income is globally (almost) untaxed.

* The Bureau of Economic Analysis only reports  computer software IP royalties back to 2006, so the pre-2006 numbers are estimates based on overall U.S. IP royalties.

** Obviously it isn’t just IT firms that generate large profits in these jurisdictions though they are equally clearly a significant part of the total. Ireland, the Netherlands, Luxembourg, Singapore and the Caribbean account for about half of all offshore profits that appear in the balance of payments data.

Here are graphs that breakout the different components of the services balance in telecommunications and computers, and the goods balance in the same sectors (showing the components that Cole Frank and I used to produce our estimate of the trade balance in hardware and software, we erred on the side of perhaps being too inclusive) 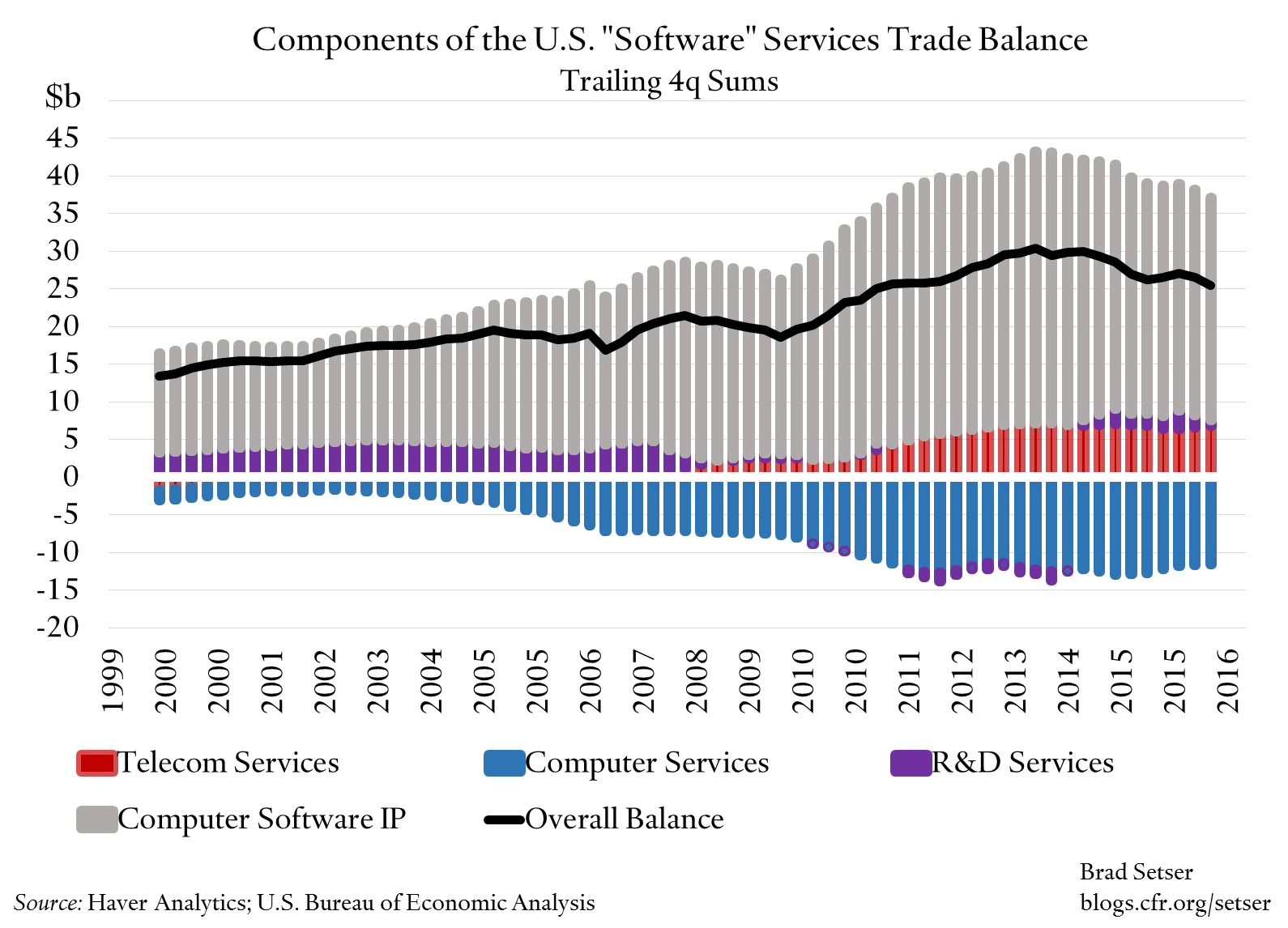 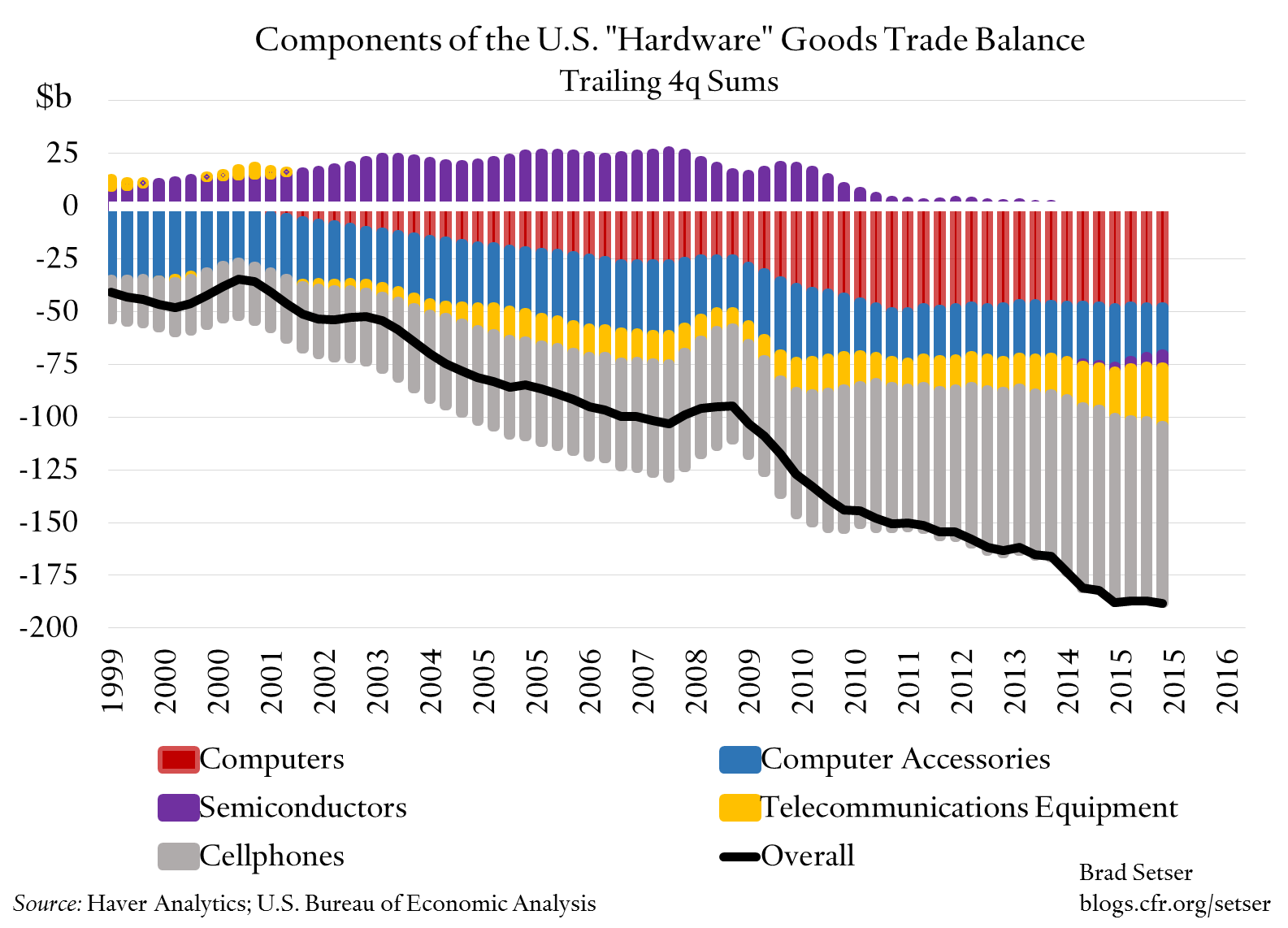